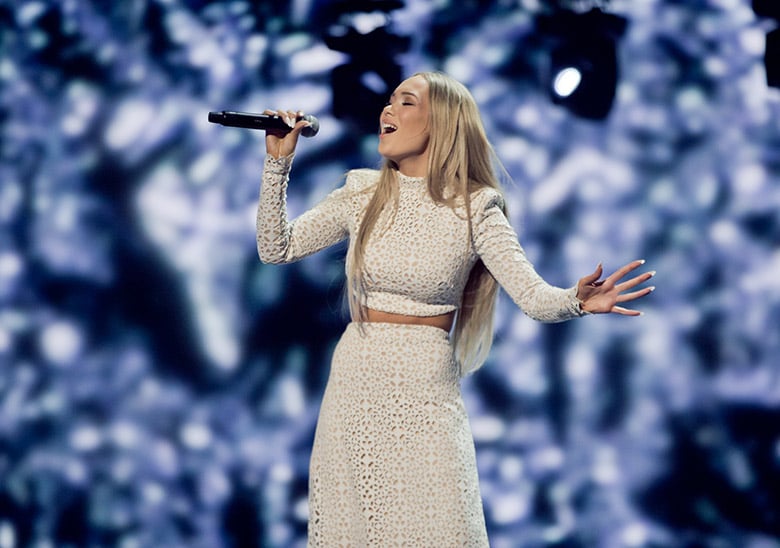 The former child star has grown into a popular Norwegian singer.

Eight years ago, little Agnete Kristin Johnsen stole the hearts of Norwegians up and down the land as she led her band, the Blacksheeps, to victory in the 2008 Melodi Grand Prix junior. Each year Norway holds a nationwide competition to choose its entry to Eurovision, and the junior event is held as somewhat of a sideshow.

The song, Oro jaska beana, was sung in a combination of Norwegian and Sami, reflecting the band's northern Norwegian background. Agnete and her bandmates come from the tiny Nesseby kommune in Finnmark, just a few miles from the borders with Finland and Russia.

Now at the second attempt, Agnete has successfully won the chance to represent her country at next week's Eurovision Song Contest in Stockholm. Sweden's Måns Zelmerlöw swept to victory last year with his song “Heroes” that featured a lot of visual extras.

The Eurovision Song Contest has been a source of frustration for Norway ever since Alexander Rybak’s sensational victory in 2009, which still holds the record for the highest ever points total. Last year's A Monster Like Me was a good song but never stood a chance of winning the event. It's just wasn't “Eurovision” enough, and the same might well hold true this year.

Agnete will perform Icebreaker towards the end of the second semi-final on Thursday 12 May, before hopefully taking her place in the final two days later.

The bookies certainly don't think Agnete has much of a chance. You can odds of up to 150/1 on a Norway victory, while Russia and France are battling it out for the title of pre-event favourites. Hosts Sweden are placed third with most bookies.

For what it's worth, I think it's a decent song albeit with a bizarre structure. The slow chorus feels like an anti-climax and that's likely to frustrate rather than entertain Eurovision fans. On the other hand, it may stand out as doing something different. Much will come down to her performance on the night(s).

UPDATE: Unfortuantely Agenete failed to make it through Thursday's semi-final. In fact, it was a bad night for the Nordics in general, as Denmark, Finland and Iceland all failed to qualify for Saturday's final. Hosts Sweden will be the sole regional representative.