The trial of Anders Behring Breivik finally gets underway on Monday. It's hard to believe almost nine months have passed since the Oslo terrorist attacks. Life in the capital has long since returned to normal, although the government quarter which bore the brunt of the explosion is still out of bounds. I live a few hundred yards away and walk past the area most days, but with the impending trial and increased media interest, I decided to take a closer look.

Statsbygg is responsible for state-owned property and construction and are thereby overseeing the clean-up and rebuilding of the government offices. Sadly it's all taking longer than expected due to the discovery of asbestos in the tallest building. Many windows are still boarded and some of the buildings are still covered up.

A perimeter fence has surrounded the area (now officially classed as a construction site) since last July, but peep holes have now been provided allowing the public to view the progress. It's a shame this has taken so long, as the trial will now be held within sight (almost) of the damage caused by Breivik.

A rebuilt government quarter would have made a real statement. But… Norway is doing just that in a different way. The reaction of the Norwegian people continues to astound me.

A few weeks ago Norwegian news covered the return to Utøya of some of the survivors. It was so poignant to watch and listen to their stories. Even with my basic Norwegian I could understand the girl who was pointing at a cliff edge – which she'd clung to for about an hour while hearing gunshot after gunshot and at one point the footsteps of Breivik.

But the survivors – and families of the victims – have been vocal in their desire for Breivik to receive a fair trial.

Their commitment to democracy and a fair society in the face of such tragedy is truly humbling.

Oslo is about to be swamped by the world's media yet again for the trial. There's already a big media presence in the vicinity of the courthouse. It will be fascinating to see if the coverage outside Norway reflects the feeling here.

UPDATE: Don't confuse what I've said above with their being any sympathy or wish for Breivik to be treated lightly. People want him given the harshest possible sentence – but it's the respect for the legal system, due process and the Norwegian way that I'm talking about. 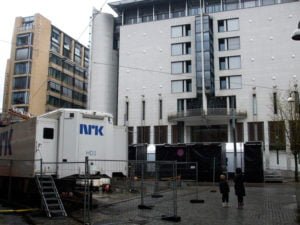 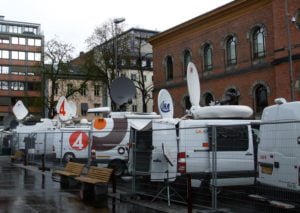