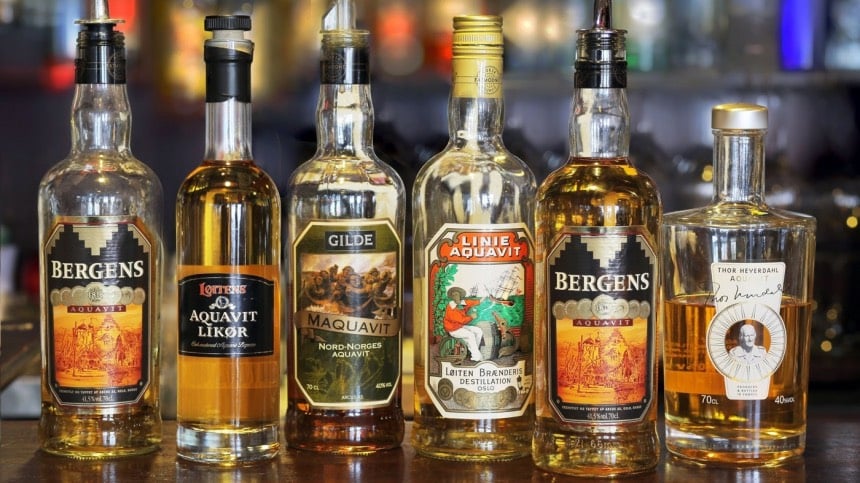 The flavoured spirit is a favourite of older Scandinavians, but Norwegian aquavit is increasingly popular with foodies outside the region too.

New Nordic cuisine has taken the trendy restaurants of the world by storm in recent years, so more and more people are being introduced to the Scandinavian spirit. The name is derived from the Latin aqua vitae, or water of life.

Aquavit is a flavoured spirit that has been produced in the Nordic countries since the 15th century.

Aquavit's distinctive flavour comes from the spices and herbs, which can vary, but the main flavouring must be from caraway or dill in order to be termed aquavit, according to European Union rules. 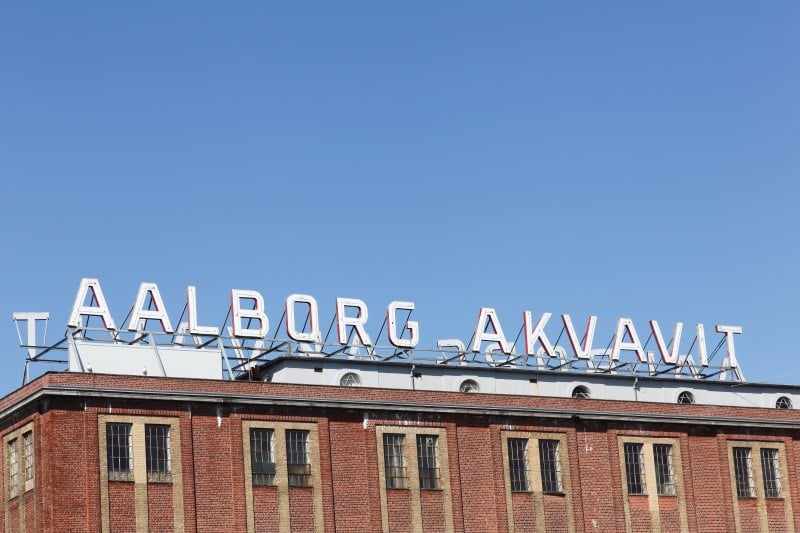 Aquavit is actually made just like gin, but with caraway instead of juniper berries. So it's essentially just a heavily spiced vodka. The best word to sum up its taste is savoury, but the flavour can vary significantly depending on whether it is aged (more on that later) and whether it is served chilled or at room temperature.

Aquavit is strong, typically 40% ABV, and it must be at least 37.5% ABV to be called aquavit (under those EU rules again!).

While often compared to gin, the spirit has a more immediate flavour profile because of the simplicity of the caraway/dill, meaning it's a drink that you can easily detect when mixed with others.

How is aquavit made?

Much like vodka, aquavit is a distilled spirit made from either grain or potatoes. Typically Norwegian aquavit is made from potatoes, while the Swedish and Danish varieties are distilled from grain.

After the distillation process, it is flavoured with herbs and spices, in the same way that gin is flavoured with juniper. Common additions are caraway, dill, cardamom, cumin, anise, fennel, and lemon or orange peel.

The precise recipes and flavours differ between brands, but caraway is the dominant flavour. Most bottles of aquavit have a yellow/golden colour, which can vary significantly between brands.

Typically, a darker colour suggests an older age or the use of young casks, though artificial caramel colouring is used in some brands.

While Danish and Swedish brands are typically light in colour, some even clear, most Norwegian brands are matured in oak casks.

This process lasts for at least a year and for some even as long as twelve years, which gives Norwegian aquavit its distinctive golden hue.

Norwegians will tell you that their variety has the most distinctive character and strongest flavour. It's up to you to determine if you think that's a good thing or not! 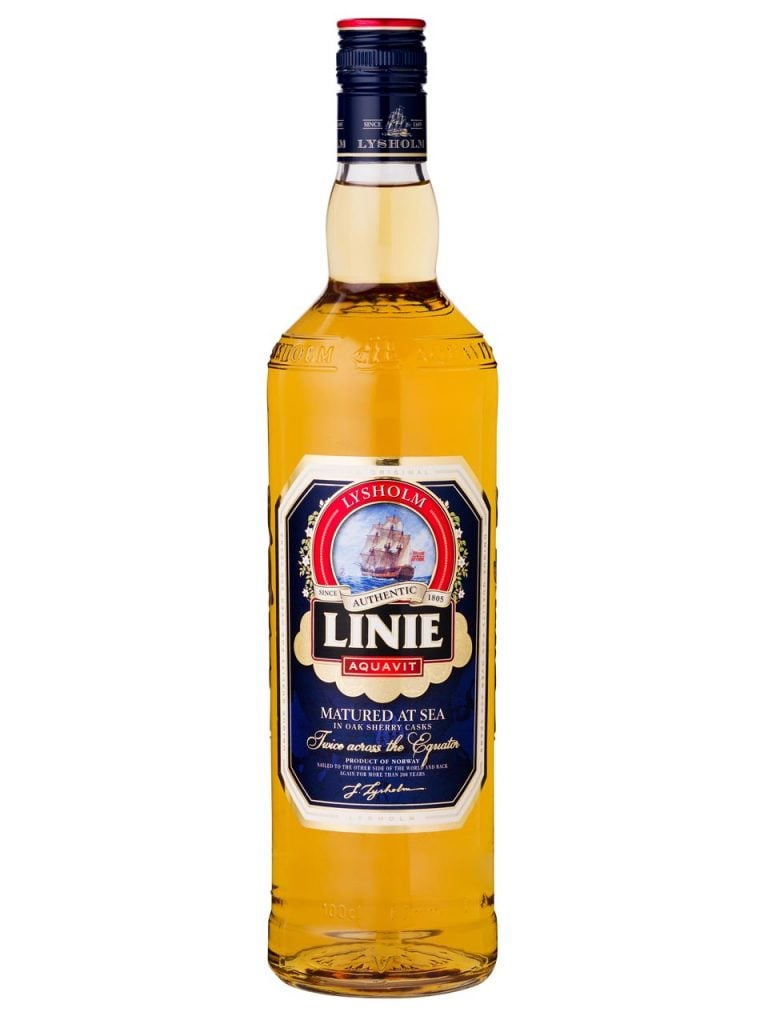 The most famous Norwegian brand is Linie. named after the tradition of sending oak barrels of the spirit on ships from Norway to Australia and back again.

The barrels pass the equator twice before being bottled. It is believed that the constant movement, humidity levels and changing temperatures cause the spirit to become more flavourful and mature faster.

The oak barrels also add hints of vanilla and wood to the taste.

It all started back in 1805, when the Norwegian trade family, Lysholm, shipped potato aquavit to the East Indies. Here people were totally uninterested in buying it, so the aquavit was sailed back to Norway. On its arrival in 1807, it was discovered that the sea voyage had vastly improved the taste. Since that day, every drop of LINIE has been sent on a sea journey across the world to mature, crossing the Equator twice – Linie.com

Even today, ships packed with Linie bottles set sail from Norway to Australia and back again before they are bottled and sold in Norway, and around the world.

Needless to say, Linie is not the cheapest brand available!

How to drink aquavit

Aquavit remains an important part of drinking culture in Scandinavia, but more so at special events rather than as a run of the mill drink. Think Christmas, birthdays and weddings.

It's also taken by some as an aperitif. In Sweden, Denmark and Germany aquavit is served chilled and in a small shot glass. In Finland and Sweden, it's common to drink aquavit at summer crayfish parties.

Things are a little different in Norway, where the drink is typically served at room temperature in special tulip-shaped glasses. These glasses make great souvenirs for the alcohol connoisseur in your life!

Sober Norwegians will sip the drink slowly to appreciate the aged quality and the diverse aromatics like cumin and citrus peel of their preferred variety.

Less sober Norwegians will also tell you that what really complements aquavit well is beer. Then, and only then, will they start to combine the two.

A shot of aquavit, followed by a gulp of dark beer. I have yet to find myself agreeing with them on this point. Regardless of how you drink it, the toast should always be accompanied by a loud “Skål!”, and remember to keep eye contact with your drinking partner. 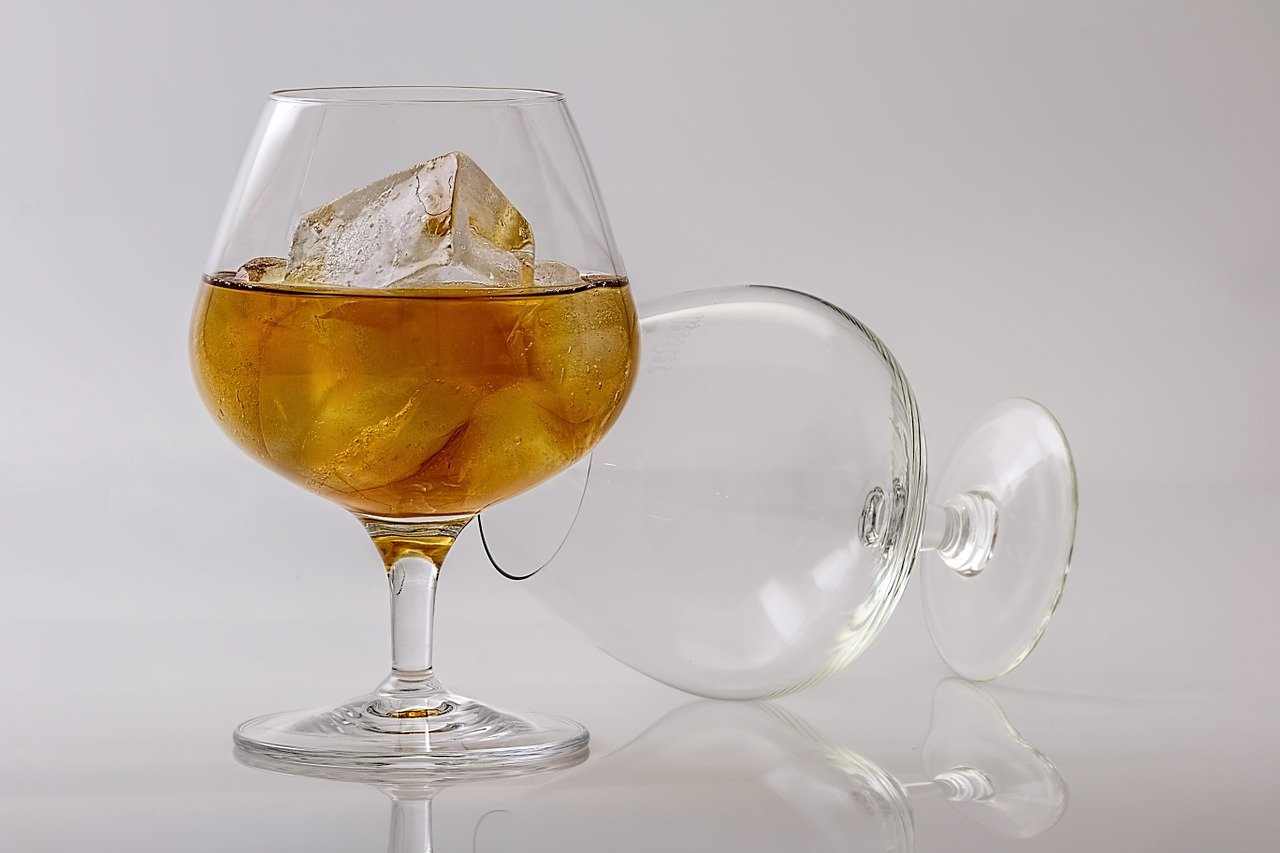 The Norwegian Friends of Aquavit (yes, that's a real thing) suggest several cocktails on their website as an alternative way to enjoy the Linie brand of the spirit, although they should work just as well for any darker aquavit.

How do you spell aquavit?

You may also see aquavit written as akvavit or akevitt. These aren't wrong, they are just different variations on the spelling used in different parts of Scandinavia.

Many words vary across Scandinavia and some words vary in regions of Norway (and of course between the two written language forms bokmål and nynorsk) so this is something you get used to pretty quickly.

If you want to know more, check out these interesting resources I've found:

Kindred Spirits: The Many Varietals of Aquavit. While Norway claims two producers that own 15 brands of the spirit, the northwest states of Oregon and Washington combined create 21 brands from seven producers.

California and Minnesota each have several producers and brands; and Colorado, Illinois, Michigan, Montana, New York, Pennsylvania and Wisconsin have joined the states that produce the beverage (Sons of Norway)

Discover Norway's Aquavit Trail. The best place to get familiar with Norway’s fire water is on the newly developed Aquavit Trail. The route winds through jaw dropping scenery and takes you to farmhouses, hotels and even to old aquavit distilleries.

Aquavit Gravlax. Gravlax or cured salmon is also another Scandinavian tradition. Curing salmon with salt and spices of your choice is an exciting thing to do.

9 thoughts on “Aquavit: The Scandinavian Spirit”