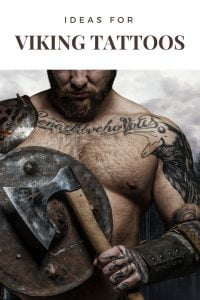 Viking tattoos are other Norse-inspired ink are extremely popular right now. If you're considering getting one, here's some visual inspiration. Enjoy!

Despite their origins more than 1,000 years ago, both the Viking Age and Norse mythology have a massive cultural impact today.

From the growing popularity of viking names to the reenactment societies all across the world and major movies and TV shows, Norse history is everywhere.

The mystique surrounding Viking culture and what we know about how they lived still remains relevant today. Many people of Norwegian heritage choose to get a tattoo to show their pride.

To demonstrate that pride, many people do a lot more than wearing short-sleeved tops! They take to Instagram and Pinterest to show off their ink. But, the best designs can be hard to find.

So, on this page, we've gathered together some inspiring photographs of real Viking tattoos from people all over the world. If you're planning on getting inked, this is the post for you!

Did Vikings have tattoos?

There's no hard evidence that tattoos were commonplace in the Viking age. Because skin is so fragile, it almost never survives in burials.

We do know from Arabic observer that the Rus, a Swedish Viking tribe that are believed to be the ancestors of East Slavic people, had tattoos. He wrote:

Each man has an axe, a sword, and a knife and keeps each by him at all times. The swords are broad and grooved, of Frankish sort. Every man is tattooed from finger nails to neck with dark green (or green or blue-black) trees, figures, etc.

So while there isn't hard proof, it does seem likely that artwork on the arm was a common feature.

Did the Vikings have coloured tattoos?

Some recent Danish archaeological research has revealed the colour palettes used by the Vikings, which range from rich reds and bright yellows to more earthy colours like greens and browns.

Colour symbolised power and wealth in the era, and it's interesting to note that things were probably a lot more colourful than we first thought.

Right, let's get to it! We've scoured the internet to bring you some of the best and most interesting ink out there.

Who knew there was so many tattoos showed off on Instagram!? It's the perfect place to grab some inspiration from days gone by:

And how about this impressive one? Recognise the face? It's of course based on Australian actor Travis Fimmel from the hit TV show Vikings. He plays the part of Ragnar Lothbrok, someone whose very existence is widely debated.

Katherine Holman, writing in 2003, expressed this common opinion: “Although his sons are historical figures, there is no evidence that Ragnar himself ever lived, and he seems to be an amalgam of several different historical figures and pure literary invention.”

Norse mythology lends itself perfectly to Viking-inspired tattoos. Animals, monsters and other Norse creatures feature prominently on Instagram. I've seen many based on Odin's ravens, for example.

Norse and other Germanic peoples began to write by using runic alphabets, which have come to symbolise Norse culture and heritage.

The runes functioned as letters, but they were much more than that. Each rune was a representation of some cosmic principle or power.

Of course, care should be taken when trying to spell modern words in runes. There were many different variations of Runic alphabets used in different parts of northern Europe and during different time periods, and there is rarely a 1:1 match with modern letters.

Runes were carved into stone, wood, bone, or metal, rather than drawn with ink. This helps to explains their sharp, angular shapes, which were well-suited to being carved onto hard surfaces.

Although many women stayed in the villages and on the farms, some sources suggest that some women may have been warriors. A woman who chose to fight as a warrior was called a shieldmaiden.

Another popular female image from Norse mythology is the valkyrie, a female figure that decided who made it to Valhalla after battle.

Sarpsborg International Viking Festival was a blast! Lots of fun fighting, good weather and great company! ⚔ I am off work for a few days, and currently relaxing in my grandparents' garden. I am a bit sad I was not able to go to Denmark this year, but it will be nice with a “normal” vacation for once. #norse #history #historical #heritage #viking #vikingstyle #vikingage #vikingwoman #valkyrie #fighter #warrior #vikingreenactment #pagan #heathen #vikinglife #norsetattoo #vikingtattoo #urnes #dragon

A post shared by Kristin Shieldmaiden (@kristinshieldmaiden) on Jul 23, 2018 at 3:16am PDT

Instantly recognisable, viking ships are a popular choice for tattoos. The longship's design evolved over many centuries but were characterized as graceful, long, and narrow.

They were all made out of wood, with cloth sails (woven wool) and had numerous details and carvings on the hull. The shallow-draft hull was designed for speed and allowed for sailing in shallow waters and beach landings.

Choosing a Viking ship design also makes it easier to adapt and extend the tattoo later. For example, with the wide ocean, birds, land, or even a battle.

About a year and a half project on @daryl2545 it's starting to come together next month will be finished with that blank spot on the back of his arm, I wish more people would just give me some ideas and let me do my thing the projects always come out so much nicer #vikingtattoo #eagletattoo #flagtattoo #americanflagtattoo #vikingshiptattoo #viking #clocktattoo #compasstattoo #tattoos @bishoprotary @sullenclothing the entire project is healed usinf @ink_oil aftercare @92prooftattoostudio @tattedtv @nucleartattoo

The Oseberg ship is an especially popular icon, and not just for body art. The famous curly carved decoration on the bow has recently been used as the inspiration for the branding of new startup airline Norse Atlantic Airways.

Another common design is the so-called Viking compass, which is actually the vegvisir. While an old design, it doesn't stretch back to the Viking Age. That's the same with several popular designs, so be sure to do research before committing a design to ink!

Do you have a viking tattoo? Which is your favourite design? If this article has inspired you, why not share it on Pinterest? We've got just the pin for that. Just hit those social sharing buttons.

5 thoughts on “Ideas for Viking Tattoos”