A new study published by the Royal Society reveals secrets about the mysterious Neolithic Battle Axe culture in parts of Scandinavia. We know now more about these fascinating 5,000-year-old people.

The Battle Axe Culture (BAC) describes the intimidating-sounding people who lived in Scandinavia thousands of years ago. The culture shared much in common with the continental European Coded Ware Culture. While a lot of archaeological evidence has been found, not much has been known about their origin or behaviour, until now.

The study—‘The genomic ancestry of the Scandinavian Battle Axe Culture people and their relation to the broader Corded Ware horizon’—published by the Royal Society looked at archaeological evidence and DNA data to unravel some of the mysteries.

Despite us not knowing a lot about the culture, the biggest archaeological discovery occurred way back in 1953. The Neolithic find was made during road construction in Linköping, Sweden.

The grave featured what was almost certainly a family. A man, woman, child and dog were buried alongside each other, with items including battle axes. Experts dated the skeletal remains to be approximately 4,500 years old.

Studying DNA from a spectrum of individuals

A team of experts from Uppsala University sequenced the genomes of 11 individuals. A genome is a complete collection of the genes and genetic material from inside a cell or organism.

The researchers looked beyond Sweden, too. People from Estonia and Poland were also studied. According to the study report, three of the individuals were from Coded Ware Culture contexts, with two from the Bergsgraven grave.

The finds of this broad study are fascinating. The results displayed a common genetic ancestry. But the real fascination is that the common genetics had not been present in Scandinavia nor central Europe before 5,000 years ago. What does this mean?

Torsten Günther, a population geneticist and one of the report’s lead authors, said that the Battle Axe Cultures and Coded Ware Cultures were distinctive and banded together via movements of people. “These groups have a history which we ultimately can trace back to the Pontic Steppe north of the Black Sea,” he added.

It might sound like a big assumption, but the study states that the Battle Axe Culture individuals have ancestry from the Pontic–Caspian steppe herders, with components originating from hunter–gatherers and Early Neolithic farmers.

“Thus, the steppe ancestry seen in these Scandinavian BAC individuals can be explained only by migration into Scandinavia.”

Normally, the skeletons and other remains of the Bergsgraven find is on display at the Östergötlands museum in Linköping. However, the building is currently closed for renovation. On the plus side, once reopened, the exhibition will have been expanded, incorporating some of the new research. 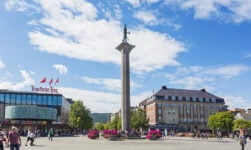 Olav Tryggvason: The Founder of Trondheim 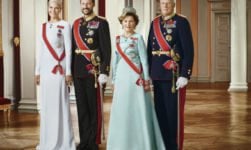 The Royal Family of Norway 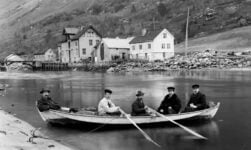 Norway in 1900: Living by the Nordfjord