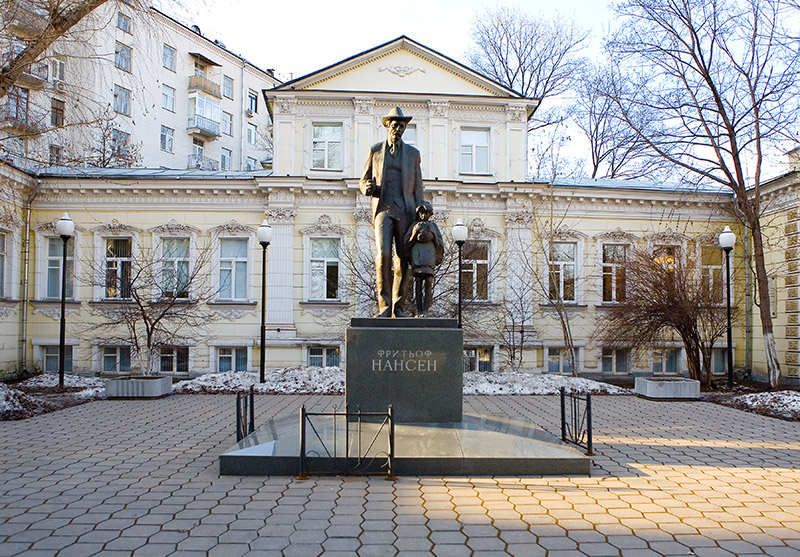 When we talk about great Norwegians, one name stands head and shoulders above almost all others: The explorer, scientist, and Nobel Peace Prize laureate Fridtjof Nansen.

Most people become famous for one thing. They’re the best at a sport, or they explore somewhere no one else has, or they discover something for science. Occasionally some people go on to have early success in one field before switching to another and finding success there too.

Fridtjof Nansen, however, didn’t seem to believe in limitations. Neither did he believe that anything was too difficult or that you should quit while you’re ahead. In fact, his life is littered with instances of not quitting but also deliberately doing things in ways that made it almost fatal to quit at all!

Fridtjof Nansen was a polar explorer, scientist, diplomat, and even a Nobel Peace Prize laureate. That's quite the CV… 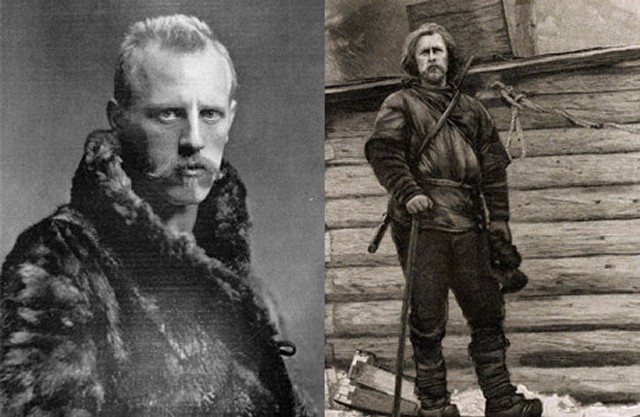 Young Fridtjof Nansen was born in Christiania (now known as Oslo) in 1861. His family had moved to Norway from Denmark around 100 years before and were noted and sometimes famous as magistrates and lawyers. Nansen’s father was a lawyer who became reporter for the Supreme Court of Norway and his mother was a niece of one of the framers of the Norwegian constitution.

Nansen strapped improvised skis to his feet at the age of two and soon became proficient. At the age of 10 he defied his parents to attempt the ski jump at Huseby – a forerunner of the Holmenkollbakken – and almost met an untimely end when his skis stuck on landing and threw the young boy forwards. His school friends were concerned until he showed signs of life and then broke into cheers and laughter at his crazy feat!

At school, Nansen was fairly average, much preferring sports to studying. He’d frequently take off into the forest and live like a survivalist for weeks on end. He became a highly accomplished skier and skater. At the age of 18 he broke the world record for one-mile skating and a year later won the first of his 12 national cross-country skiing championships.

In 1880, Nansen secured a place at The Royal Frederick University and chose to read Zoology – a subject he hoped would lead to an active, outdoor life. His life course was perhaps set in 1882 when a professor suggested he take a sea voyage to study Arctic zoology at first hand.

The trip was a success, allowing Nansen to develop and demonstrate various theories about the Gulf stream, the formation of Arctic Ice etc. He also first got the idea that Greenland could be traversed – something no one had done at this point. He never returned to his studies. 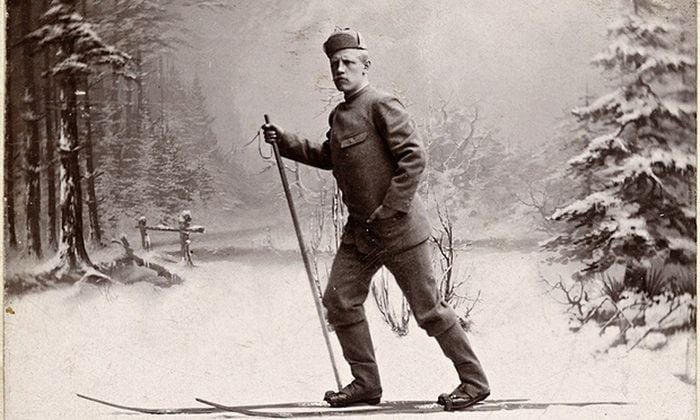 Instead, he took a position at the Bergen Museum where he spent the next six years studying the nascent field of Neuroanatomy, in particular of lower marine creatures.

All throughout his time in Bergen, Nansen had the idea of crossing the Greenland icecap. The furthest anyone had managed was around 100 miles East of Disko Bay before turning back. But Nansen had though a lot about this, and he had an idea!

The problem, he figured, was that the West of Greenland was inhabited but the East was a harsh and barren wasteland. Therefore, any trek East from civilisation would ultimately have to be a double-trek across and back because no ships could get close enough to the East coast. So, any such journey was doomed to fail. Instead, Nansen planned to travel West from the harsh East towards civilisation.

This also fit in with Nansen’s general ‘no retreat’ philosophy as there would literally be no chance of turning back. Suffice to say that after a gruelling and calamitous time, the team made it all the way across Greenland. Before leaving Norway, Nansen had defended his doctoral thesis – the traditional last step before being granted or denied. On his arrival in Godthaab he found out he’d been successful, a fact which was the furthest thing from his mind at that point in time!

After his triumphant return from crossing Greenland, you might expect an explorer to relax for a while. Nansen did. He took almost a whole year – getting married in the meantime – before announcing he intended to seek the North Pole.

This was another idea that had been brewing for a while. He was convinced that polar currents would allow an explorer to drift very close, if not all the way, to the pole. His plan, therefore, was literally to sail into ice until the shop became immobile and let it be led by the currents.

Nansen commissioned a unique ship for his unique journey. Its rounded hull would rise upwards if it met pack ice while its interior was exceptionally strong. Finally, it was designed to provide great shelter for its crew who would effectively be holed-up in an iceberg for a few months. The ship was christened Fram and it did everything required of it.

In the end, Nansen’s voyage to the North Pole was unsuccessful. But the techniques he developed in using polar currents led to the later success of explorers such as Amundsen, who even used Fram in his Antarctic exploration.

After getting too old to be risking life and limb on the high seas, Nansen decided to try his hand at politics. He was instrumental in securing Norway’s independence from Sweden, that came about in 1905. Initially he’d simply been trying to make the case for a separate consular service, to protect Norway’s interests. When this became impossible, independence was the only way forward.

After this, he was appointed Norway’s first Minister in London. His main goal was to secure Norway’s position as an independent and nation in the eyes of the world. In November 1907, the ‘Treaty between the United Kingdom, France, Germany, Norway, and Russia respecting the independence and territorial integrity of Norway’ was signed and Nansen’s mission was complete. Shortly after, while he was still in London as a guest of Kind Edward VII, his wife passed away.

Nansen then spent a period of time travelling and pursuing Oceanography – a subject that had overtaken Zoology in his interests. He wrote many scholarly papers and his work was crucial in defining a phenomenon called the Ekman Spiral.

The League of Nations

The War in 1914 led to Norway, Sweden and Denmark declaring themselves officially neutral. The effects in those countries were quiet small, though the loss of overseas trade meant shortages of food. Nansen was appointed as President of the Norwegian Union of Defence – a job that had few official duties. One was to go to Washington to secure food supplies from the US.

After the war, the world created the League of Nations in an attempt to prevent it from happening again. Nansen became President of the Norwegian League of Nations Society and helped ensure that the slightly aloof country became a full member in 1920.

Nansen started out heading up the efforts to repatriate people displaced by the war. Over time his work became more and more defined by care and treatment of refugees and stateless peoples.

In 1922, Nansen was awarded the Nobel Peace Prize “[For] his work in aiding the millions in Russia struggling against famine” and “his work for the refugees in Asia Minor and Thrace”. For the rest of his life he would continue to work tirelessly on behalf of other people, whilst also occasionally publishing scientific works and keeping his skis close to hand too. 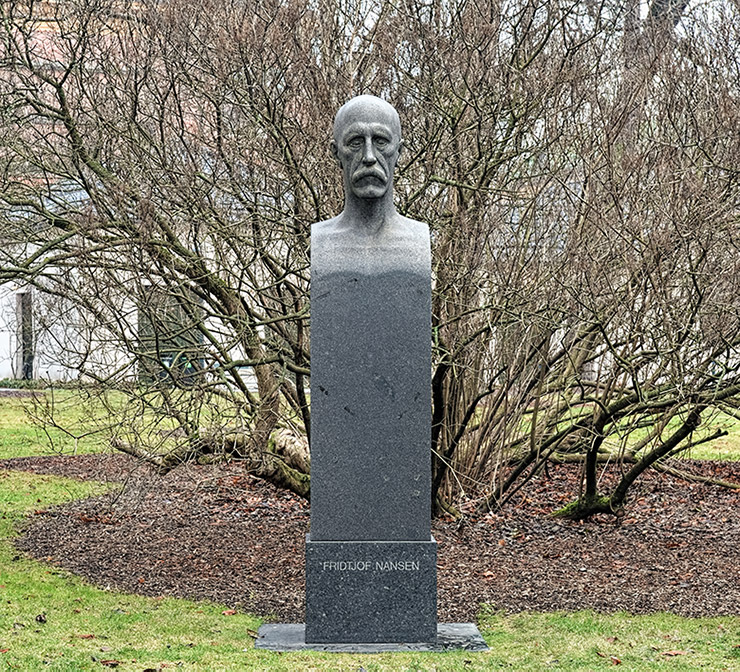 He died of a heart attack in 1938 after a bout of pneumonia that came to light while he was skiing with old friends. He had a non-religious state funeral and his ashes were scattered at his home – now home to the Fridtjof Nansen Institute.

A great number of advances in all manner of fields are built directly off the back of Nansen’s work. He pioneered techniques for Arctic Exploration and developed the skills needed to survive in such harsh and impenetrable conditions.

Nansen’s name lives on in so many places. There’s the Nansen Refugee Award, given annually by the United Nations High Commissioner for Refugees. There’s a Nansen Basin in the Arctic, as well as various mountains and islands in the Earth’s coldest regions.

Beyond our planet, there’s a Nansen Crater on the moon, one on Mars and there’s even an asteroid called 853 Nansenia in our solar system!

Finally, cruise and sea-adventure company Hurtigruten has an exploration ship called MS Fridtjof Nansen while the Norwegian navy has a whole ‘Nansen Class’ of vessels named after famous explorers of Norwegian origin.

After his death, his ethos was summed up by his ex-colleague Lord Robert Cecil. “Every good cause had his support. He was a fearless peacemaker, a friend of justice, an advocate always for the weak and suffering.”