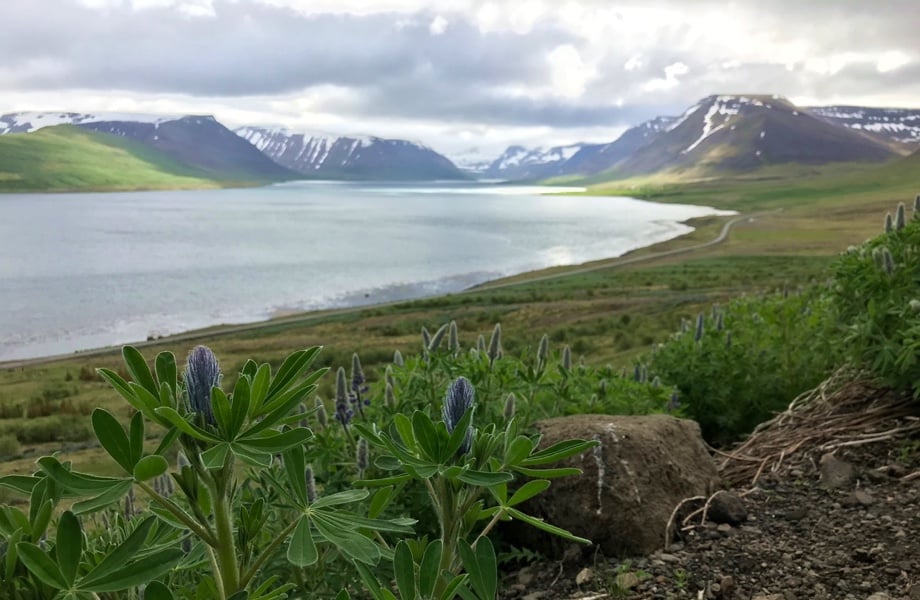 If you ever get bored of Norway's spectacular fjords, you can fly a few hours west for even more!

Many Norwegians choose to head south to the sunshine rather than exploring the wonders of Iceland, and that's a crying shame. Their country is fabulous, of course, but Iceland offers something a little different.

Icelandair heavily promote the idea of an Iceland stopover when travelling between the USA and Europe. It seems to be working, for I met more Americans on my travels than any other nationality.

It was a very quick trip for work, so I didn't get to experience as much of the country as I would like, but I did a great sense of what the Westfjords region was like. This lesser-explored region isn't as well-known for its geothermal activity and hot springs, rather for its mountains and fjords.

My journey started in Ísafjörður – or Isafjordur as I'll write from now on to save the twisted keystrokes I must make to write letters like ð. 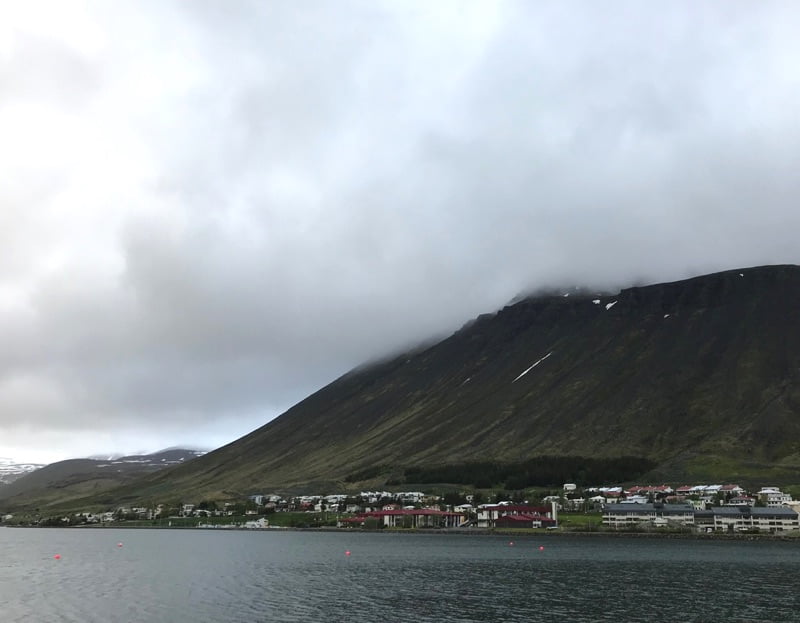 The location was stunning and reminded me instantly of some of the small towns amid the mountains of the Lofoten islands.

Inside the airport terminal there is a display of art depicting the history of the area – a great use of space! Along with plenty of archive photos of the old seaplanes, there was this great shot of Ísafjörður taken from the mountain at the end of the fjord. 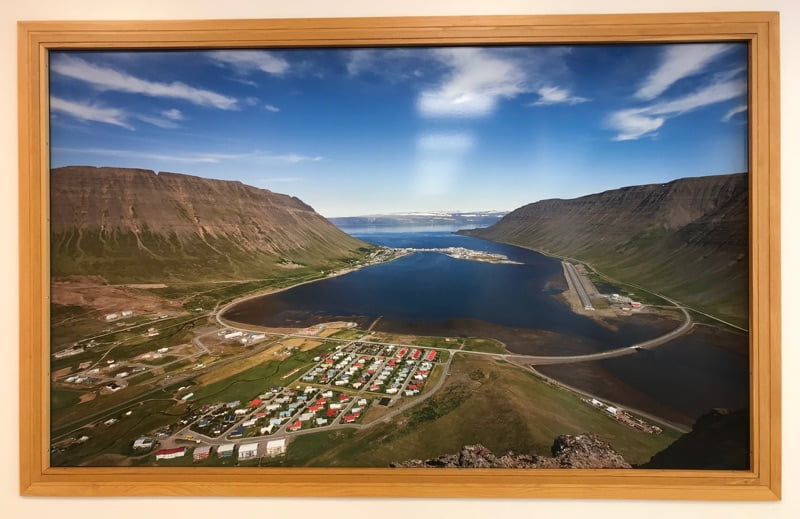 That's the airport runway on the right hand side. More on that later!

It may be small but the town functions as the regional capital of north-west Iceland. Along with the airport providing daily flights to the capital, there's several hotels, restaurants, shops, supermarkets, a petrol station, and even a small football ground. 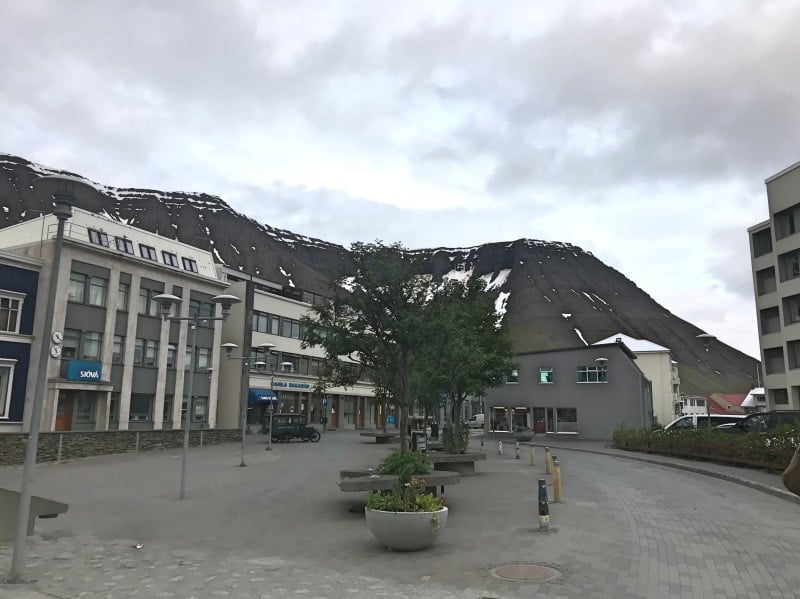 But tourists aren't here to see Isafjordur, and neither were we, so let's jump in the car!

After an hour or so in the car you begin to get a sense for this region. Of course it's similar to the Norwegian fjords, but different too. For starters, there's almost no trees.

I hadn't noticed this at first, but as I was searching to describe to a work colleague how this area differed from “our” fjords, I spotted a lone tree, and then it hit me like a brick wall. 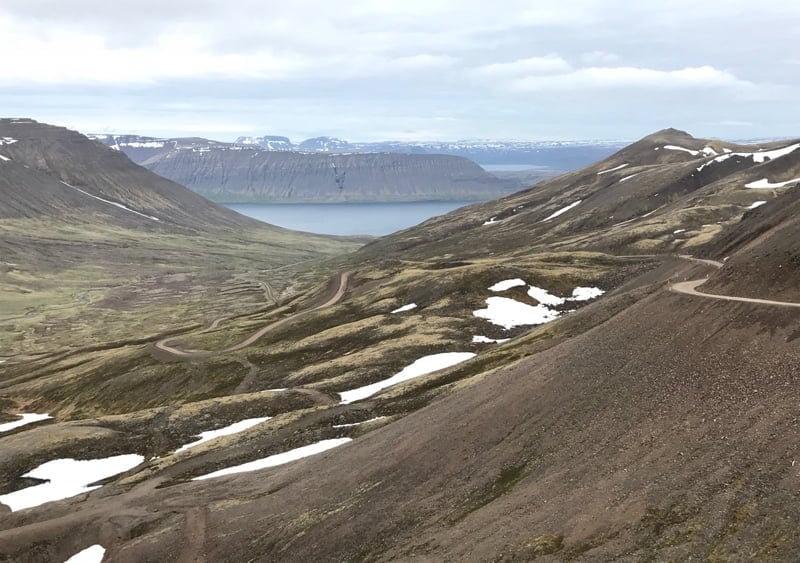 As you'll see from the picture above, the roads are not the best! They wind around the fjords and over the mountains and at times are little more than dirt roads.

This is no bad thing! The roads are super fun to drive, and they provide spectacular views of fjord and mountain landscape. There's also plenty of the white stuff, even in the middle of June! 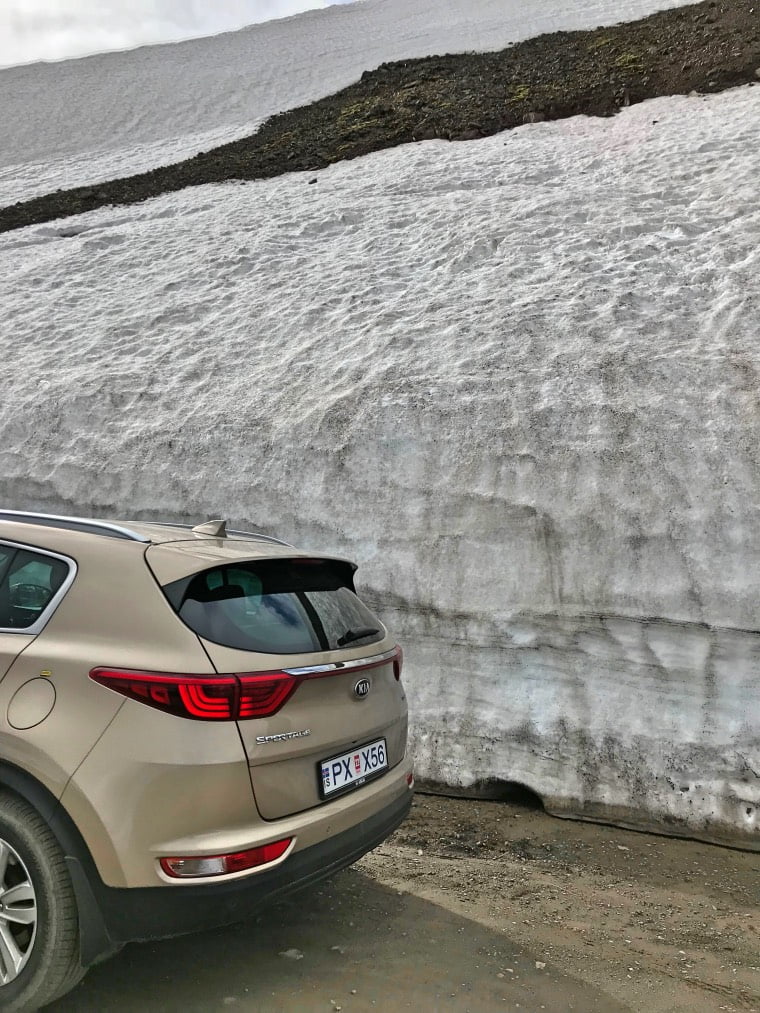 Such are the notoriety of these roads, the clerk at the rental car desk said, “Here in Iceland we don't care about scratches. You're going to get them!”

Despite the lack of trees, the landscape had plenty of variety. The different layers of rock clearly visible in the mountains, the snow and ice, the mosses and grass at times created a nice blend of colours. 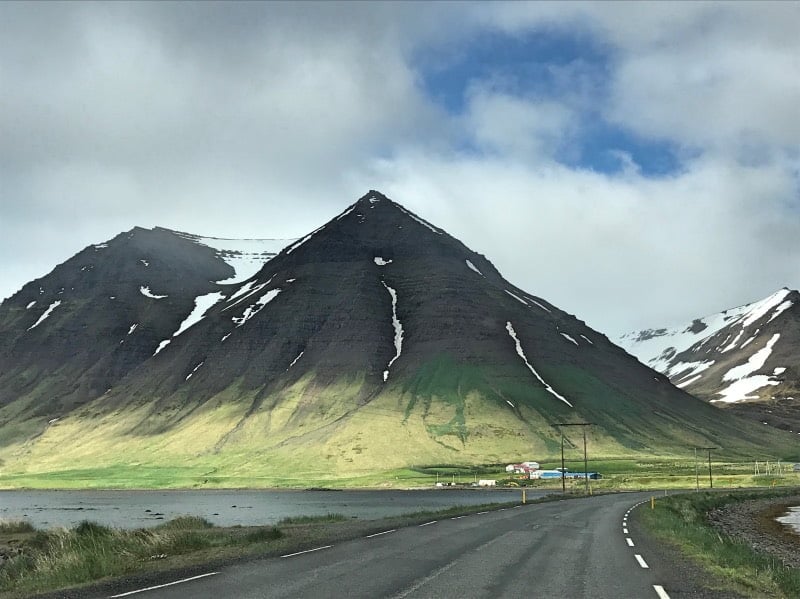 My ultimate destination was the very quiet Arnarfjörður. There's virtually no settlements here beyond a camp for construction work on a road tunnel and a tiny village called Hrafnseyri. 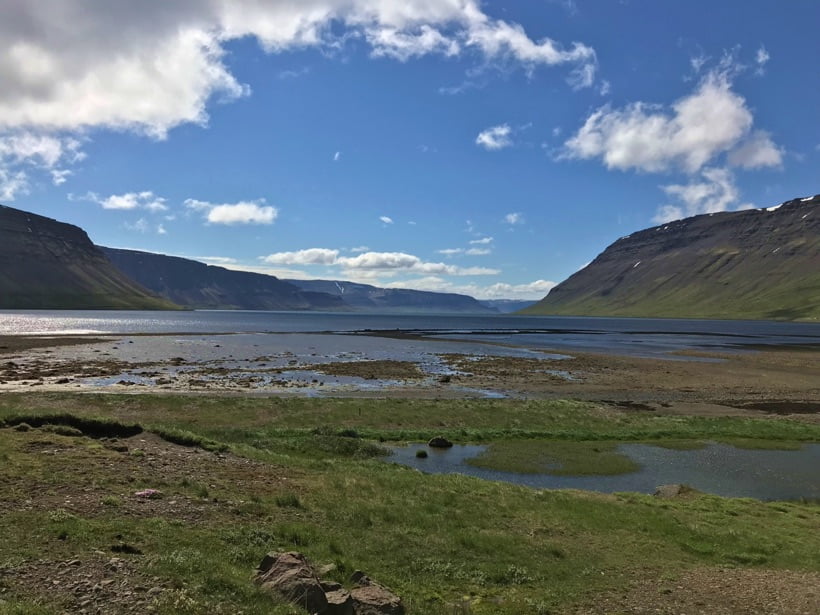 Hrafnseyri was the birthplace of Jón Sigurðsson, the father of Iceland’s push for independence from Denmark, but today is home to a museum, a handful of buildings and a campsite.

Close by, a rocky road only suitable for four-wheel-drive vehicles leads to a mountain-top lake with this spectacular view back across the fjord. 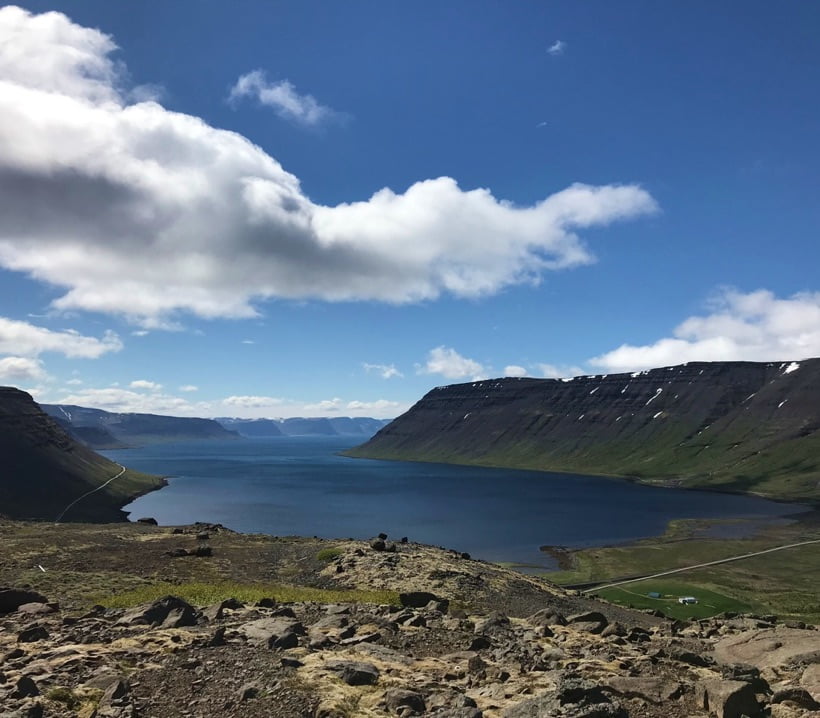 I didn't get to see many sights as we were on a very tight work schedule, but thankfully we did have time (at the client's insistence!) to take a short detour to see one of the country's most famous waterfalls.

It is quite the sight. The pictures on this page really don't do justice to the size and power of this natural wonder. It looks intriguing when pulling up in the car, but the waterfall can only be fully appreciated up on the clifftop that you can see here: 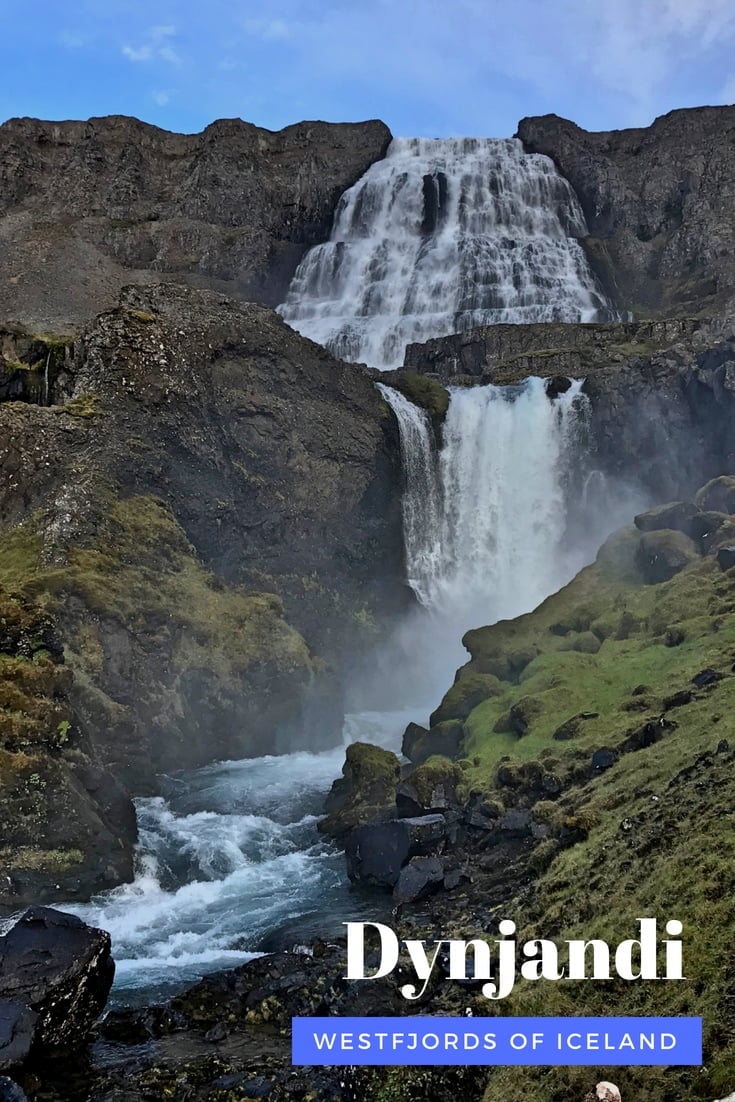 That clifftop requires quite the climb, however! I lost count of the number of steps but it was certainly enough to break a sweat. The ground is very uneven and the rocks are loose in parts, so bear that in mind and take care if you're planning a visit. 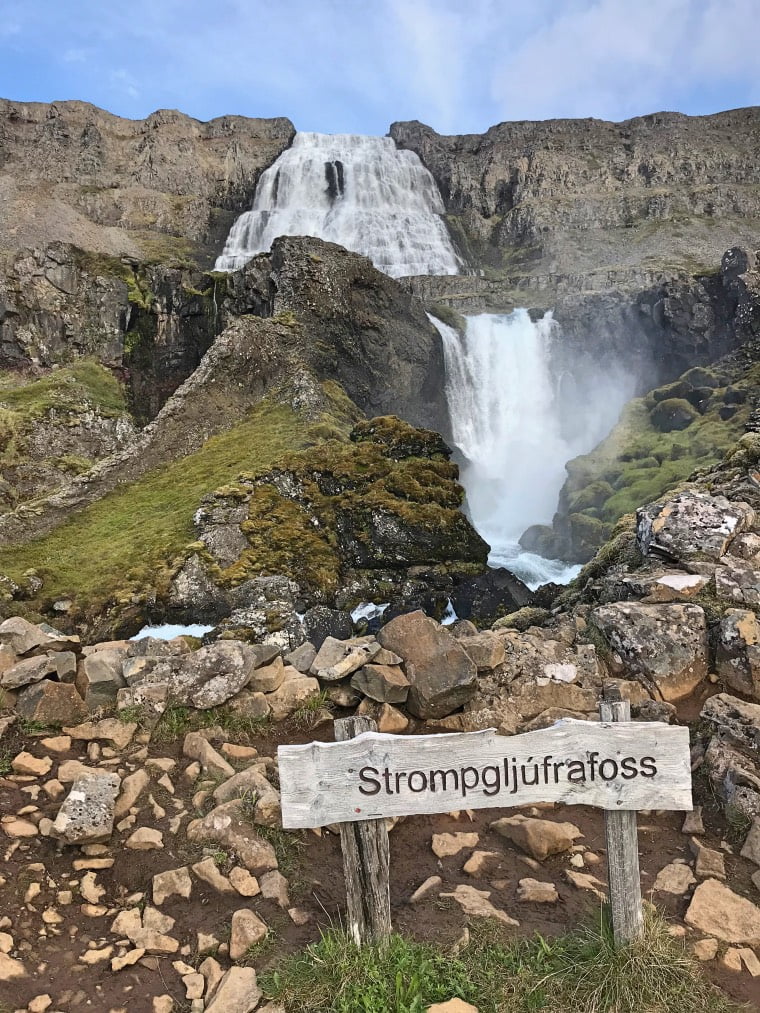 Even if you can't or don't want to make it all the way to the top, there are several smaller waterfalls along the way that are well worth a look, and of course the main Dynjandi waterfall appears ever more impressive the closer you get! 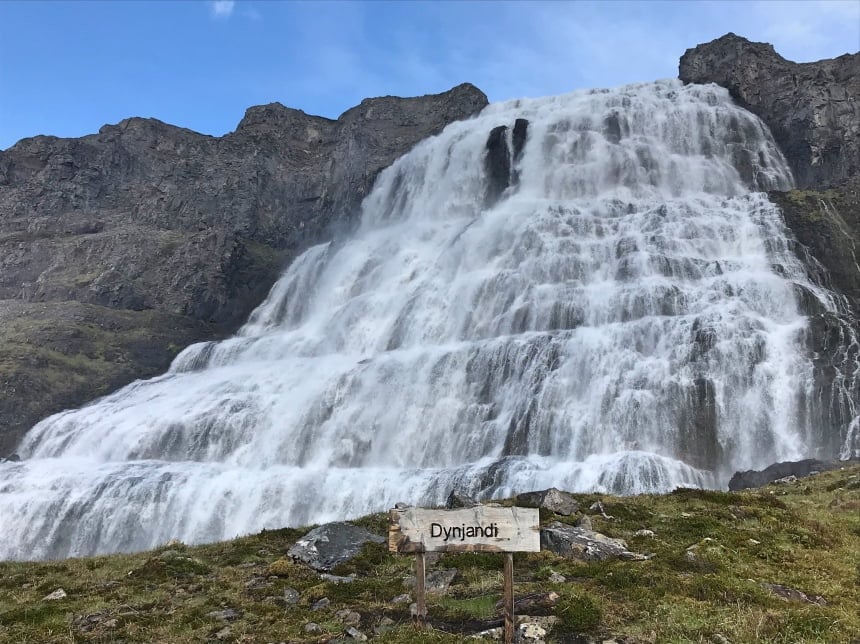 Getting to the region

Despite the awesome scenery, my biggest memory from the trip will probably be the flight from Reykjavik to Isafjordur.

The landing is world-famous among pilots and frequent travellers, as it requires flying into the fjord extremely close to the mountainside before making a 180-degree bank while on the final descent. 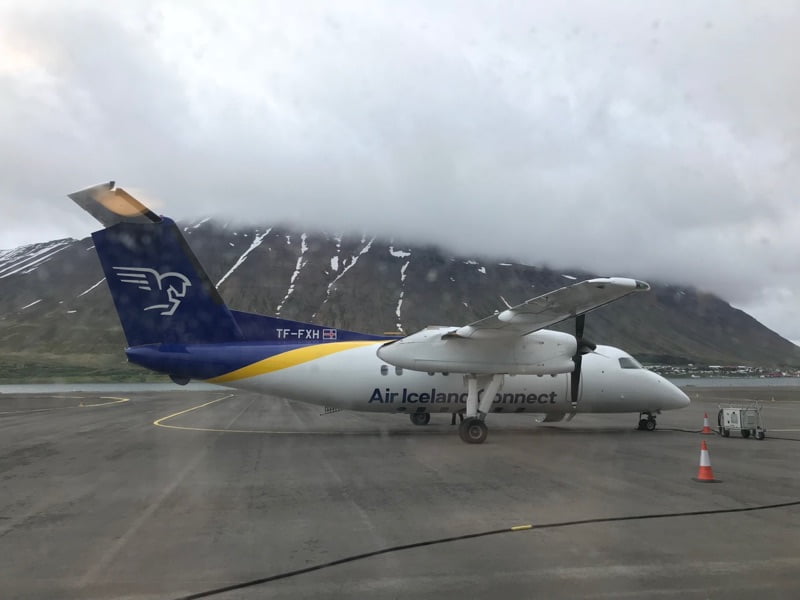 Only smallish propellor planes can make the landing due to the difficult approach and small runway.

Another complication is that domestic flights in Iceland don't operate from Keflavik International Airport, at which almost all flights from overseas arrive. 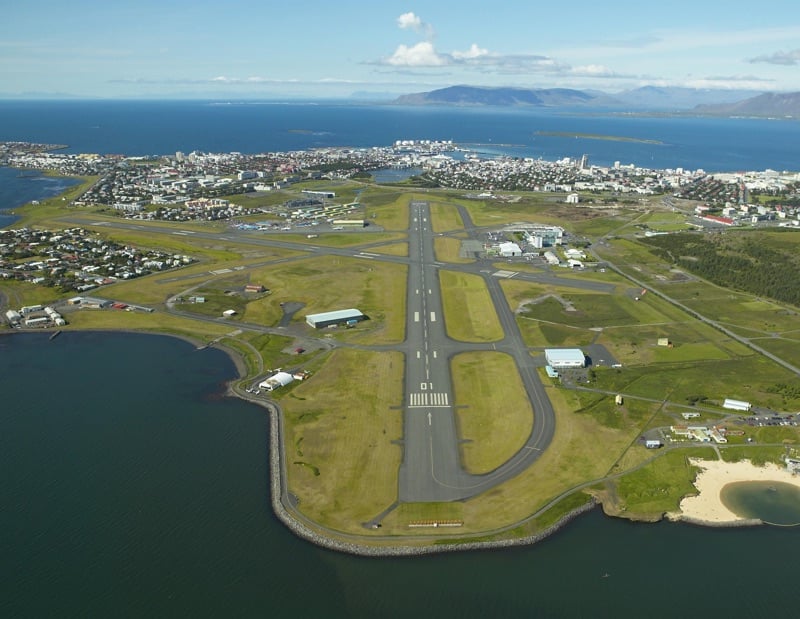 Instead, you have to take a long bus ride or pricey taxi into Reykjavik itself to the much smaller domestic airport, pictured above with the city in the background. Yes, Reykjavik really is that small!

Confusingly, this airport is sometimes called Reykjavik International Airport because it has some flights to Greenland and the Faroe Islands. So when you think you're arriving at Reykjavik Airport on an international flight, you're actually arriving at Keflavik, a 47km drive away. Ugh, sort it out, Iceland!

Anyway that minor frustration aside, this was a fantastic trip and I only wish I'd had a bit more time to explore Reykjavik and the rest of the westfjords. Not to mention the rest of the island. Next summer, perhaps!