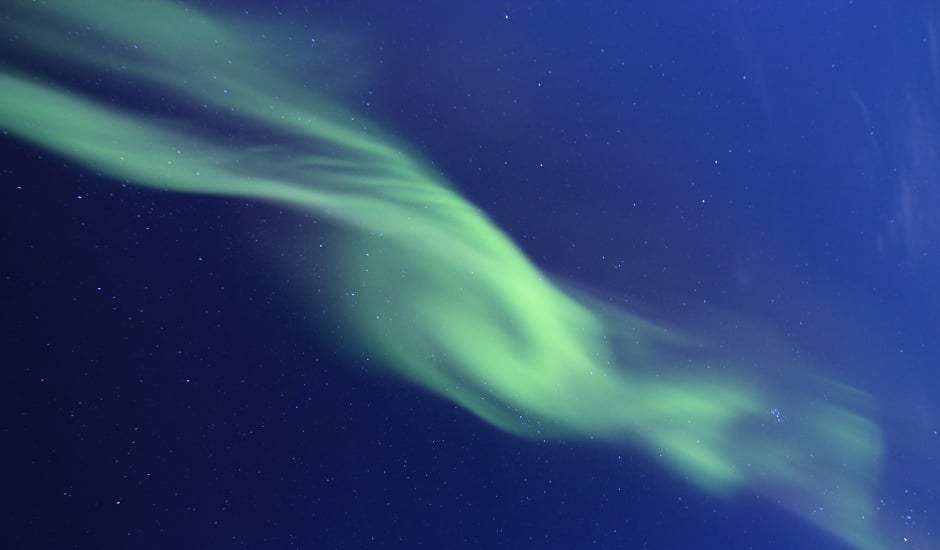 And until last week, I would sheepishly reply “no”.

The truth is I have, once in Trondheim and once in Tromsø, but neither occasion was memorable, just a mere glimpse of a very faint white/green wisp on the horizon. For someone who's long dreamed of seeing the aurora borealis, it's been a real sore point of my time in Norway.

Last week I travelled to Tromsø and despite it being very early in “northern lights season”, I finally hit the jackpot.

Tromsø is the biggest city in the Norwegian arctic and a famous tourist destination for northern lights hunters. Half of the tourist brochure is dedicated to the assorted aurora chasing activities going on every day in the winter season.

I arrived in Tromsø on 17 September, the very first week of the “winter season” and only three tours were running. Despite a strong forecast and reports of a great display the night before, I wasn't confident.

Now, I'm not generally a fan of organised trips. I pride myself on being an independent traveller, hunting out interesting hotels, local restaurants and watering holes, and interesting sights beyond the usual tourist trail.

In Tromsø there are opportunities to see the northern lights yourself, by hiking to Prestvannet, a lake in the middle of the island offering good views to the north and a certain level of protection from the city lights. Or a local bus will take you to the north of the island. 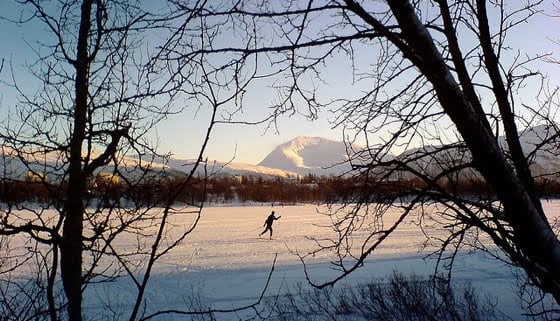 The advantage of a tour is straightforward. Firstly, you have the ability to change location. Some tours will drive all the way to Finland to find clear skies. Secondly, you have knowledgable guides, skilled at reading the forecasts and knowing the best locations around Troms county.

For me, it was a no brainer, so I booked on the tour offered by Tromsø Friluftsenter.

Our guide Trine picked us up – a group of 10 – from the Rica Ishavshotel in the centre of Tromsø at 1915. As it was still light, we took a detour on the way to their farm, allowing us glimpses of the spectacular scenery around Tromsøya and Kvaløya. Just under an hour later we arrived at Risvik, home of the Tromsø Friluftsenter.

The farm is by a beach offering a beautiful view north across the Norwegian sea. We watched the sun set from the beach, which was a  lovely experience: 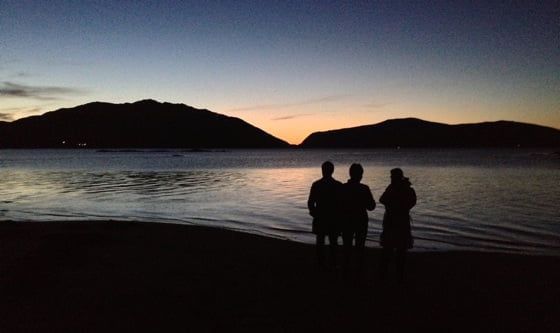 As you can see the sky was clear, but as the darkness drew in there was no sign of the lights, so we made our way from the beach to the farm's lavvo, a traditional Sami dwelling. Inside, Trine and her team had lit a fire and prepared coffee and snacks. We spent half-an-hour chatting, getting to know each other, and just enjoying the atmosphere.

The ten of us were a varied bunch, from Italy, Thailand, Australia, Hong Kong, and of course, the UK. One couple were even on their honeymoon! Only Trine and her colleague Kathrine were Norwegian, really emphasising what an international draw the northern lights are. 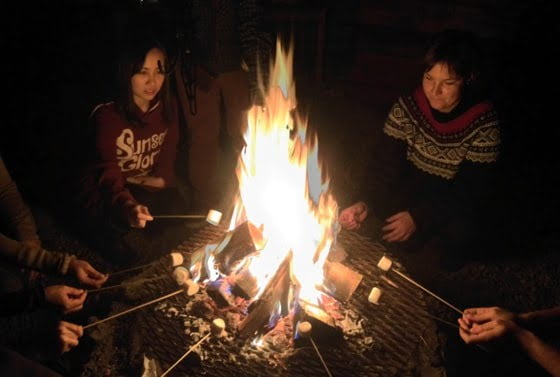 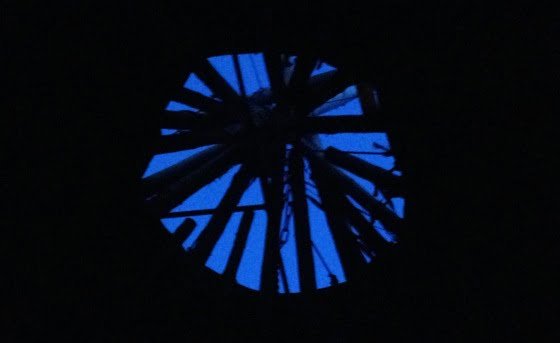 After a while, Kathrine came running in to tell us the lights were out. You've never seen ten people move so fast!

As soon as I stepped outside I could see a faint but still very obvious funnel of light behind the hills to the north-east. We all made our way down to the beach for a better view. It wasn't spectacular but it was my first real sighting all the same.

I couldn't help but feel emotional, remembering the stories from my mother, of her seeing the lights with her grandfather on the beach on the Isle of Lewis when she was a little girl. She's not seen them since, and I wished she was with me just then. So I did the next best thing, sent a text! 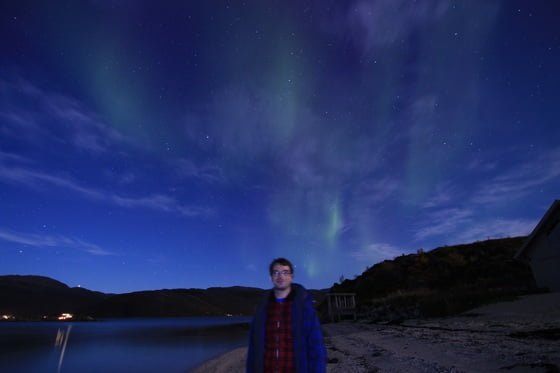 As the temperature dropped, we returned to the lavvo for another half-an-hour to warm up in front of the fire, drink some more coffee, and toast some more marshmallows. I decided to go back outside at about 2200, I don't know what made me do that, but as soon as I stepped outside – BOOM!

This is what I'd wanted to see ever since my mother told me her story! It was a stunning display, lasting for two hours at varying degrees of intensity.

The lights shot across the sky, dancing and twirling like ribbons all around us, a party in the sky. We saw white, green, yellow, and even the lesser-spotted pink/purple colour edging one of the ribbons. It was magnificent. 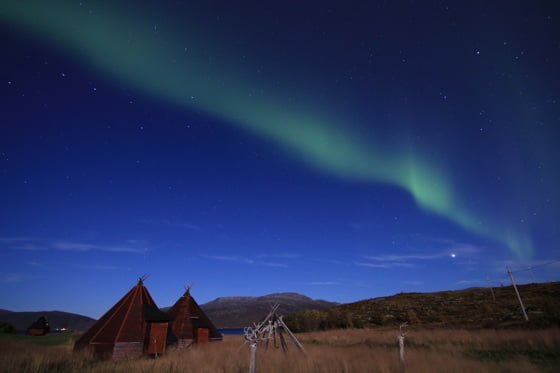 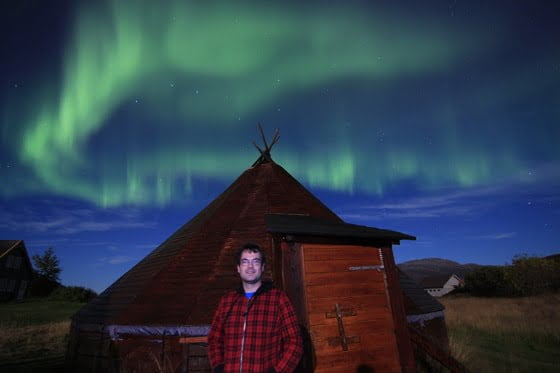 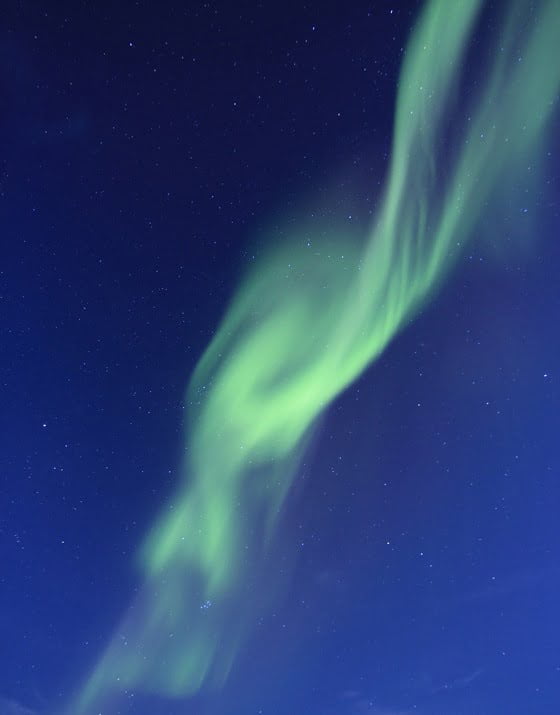 Magnificent, yet not at all as I'd expected.

The lights were fainter than my expectation, but the movement and variation in speed and intensity was at times gripping. Photographs such as these are taken on a long-exposure, hence the “light” sky when in actual fact it's dark.

This overemphasises the intensity of the lights, but at the same time can't even come close to capturing the graceful movement and personality of the aurora by the human eye that turns a mere sighting into a spectacle.

Having said that, at their strongest, the aurora burst into a kaleidoscope of colour right above our heads. It's not something that happens every day even in this part of the world, so I feel privileged to have seen it.

The return to Tromsø

If cloud covers Kvaløya, Trine and her colleagues will drive elsewhere, sometimes deep into Troms county (inland is often less cloudy) to search for the aurora. But more often than not, their location on the north side of Kvaløya offers up a brilliant show. I'm glad we were able to stay put, as it made the night all the more memorable for the conversations and shared experiences in the lavvo and on the beach.

As we pulled into Tromsø just after 0100, we caught one final glimpse of the aurora skipping across the sky above the harbour. It genuinely felt like she was saying goodbye.