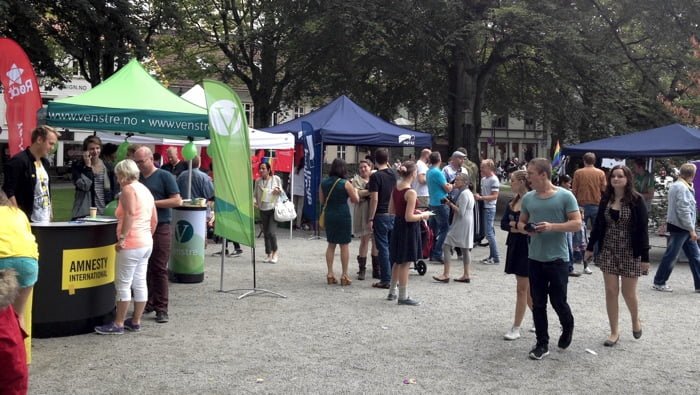 One expat's first experience of politics in Norway, including the 2013 Norwegian General Election results.

Those who know me from back in the UK will know of my interest in politics. I've been a member of the Liberal Democrats for over ten years, worked for the party for a year, trained countless volunteers all across the UK and even stood for Council several times.

Since moving to Norway I've kept my opinions on politics here to myself, for two reasons. Firstly and most importantly, I'm not Norwegian. I didn't grow up here, didn't experience the education system, and cannot vote in elections. But also, I've been watching and learning. For someone interested in politics but with first-hand experience of only one political system, it's been a fascinating couple of years.

This week, Norway voted in its first General Election since 2009. Here's some of the main differences from the UK:

This changes the focus of political debate away from the “bar-chart” tactics, to what policies a party will push for if they become part of a Government. This doesn't mean coalition tactics are out of the window of course. Venstre (Liberals) and KrF (Christian Democrats) released a pre-election statement on their common-ground, with an eye on joining forces in Government.

Nine parties – There are nine main parties covering the whole political spectrum, seven of which were represented in the Parliament before this election. Having nine parties ranging from the communist Rødt to the right-wing Progress means there is almost certainly a party representing your views.

Televised debates – You couldn't watch anything else on national broadcaster NRK in the weeks leading up to the election. Okay slight exaggeration, but there was a whole series of well-run televised debates featuring all nine main parties focusing on a different topic each time. The UK dipped its toe in the water in 2010 and from my experience here, should look to expand this significantly next time.

Advance voting – In Norway, registered voters can make their choice up to a month before polling day. Over half a million Norwegians choose this option, and I have no doubt it increases the overall turnout.

Alcohol ban – Alcohol is banned from sale in supermarkets on election day. A big surprise to me! Yet the pubs remain open, somewhat of a loophole. Gerry tells me this is also the case in Mexico, so maybe we're the weird ones for allowing people to vote drunk back in the UK… 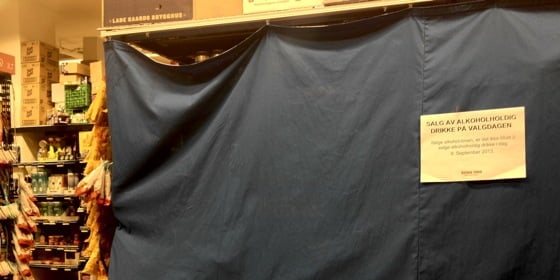 Valgvake literally means election monitoring. Each party hosts a valgvake, but so do churches, universities, and other groups. I attended a hastily thrown together valgvake at Digs, the new co-working office in Trondheim where I spend my days now. This was a great opportunity for me to hear the differing views about politics in Norway, and get yet another window into Norwegians do politics.

The NRK coverage of the election results were projected onto a wall, along with a nerdy spreadsheet collecting the predictions of everyone present. We also held a secret lokalvalg (local election), which was predictably won by the most pro-entrepreneurial party out there, Venstre (Liberals), and a politics quiz. And of course, there was lashings of coffee, beer and waffles! 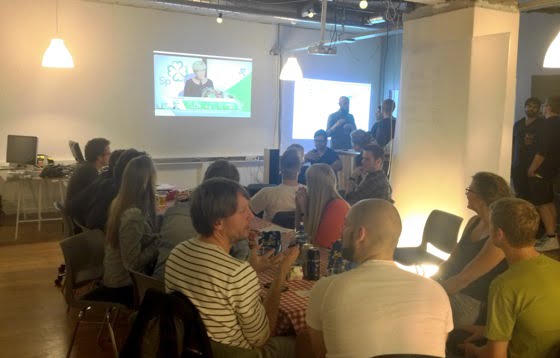 The results of the General Election were as expected, here is the percentage of the vote and the number of seats won by each party (thanks to Wikipedia): 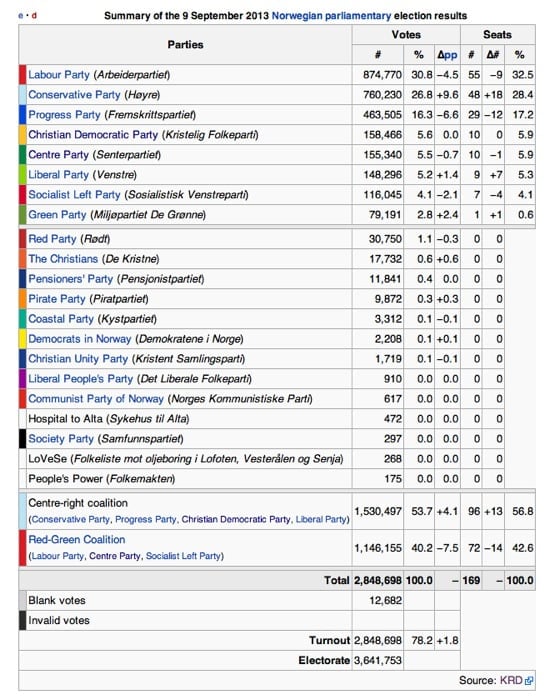 So has Norway lurched to the right, as reported by some foreign media? No. The Governing Red-Green coalition lost 7.5% of the vote, although PM Jens Stoltenberg's Labour party remained the biggest party. The Conservative party made substantial gains and seem highly likely to form a coalition with the Progress Party, Christian Democrats and the Liberal Party.

Of these, only the Progress Party can be truly considered right-wing, and support for them dropped by 6.6%, the biggest drop of any party in the election. Norwegians call the Conservative party right-wing (partly because their name in Norwegian, Høyre, literally means right!) but I consider them to be in the centre.

It is now the job of Conservative party leader and next Prime Minister Erna Solberg to form a coalition agreement between the four parties. What Norway is likely to end up with is a centrist Government, with minor influence from the right-wing.

There's always the possibility the Conservatives and Progress will go it alone in a minority government, with support from the Christian Democrats and/or Liberals on certain issues. The talks are likely to take several weeks – and I'm following them with interest.

It's a potentially game-changing time in Norwegian politics, and the next four years will be critical in shaping Norway's post-oil future. It'll be fascinating to watch what unfolds…

8 thoughts on “The Norwegian General Election 2013”