Take advantage of Bergen's coastal location and tour one of the closest fjords to the city in just a couple hours.

Bergen is famed for its rainfall, which the locals take in their stride. They have to, as on any given day there's a 64% chance it will rain! But Bergen's relationship with water lies much deeper than what falls from the sky. Known as the gateway to the fjords, Bergen is home to Norway's biggest cruise ship port, welcoming huge numbers of tourists every year.

Bergen's industry relies on the water too. From the days of the Hanseatic League trading dried cod, to the modern fish market and 24-hour cargo port of today. So on my latest trip to Bergen, I chose to explore the water!

I joined the fjord cruise on the M/S White Lady, a four-hour tour of the waterways around Bergen. Specifically, we toured the Osterfjord around the island of Osterøy, at 328 square km the largest inland island in Norway. During the trip we passed some of Bergen's suburbs including the large residential island of Askøy, and Sandviken, still home to original Hanseatic housing. 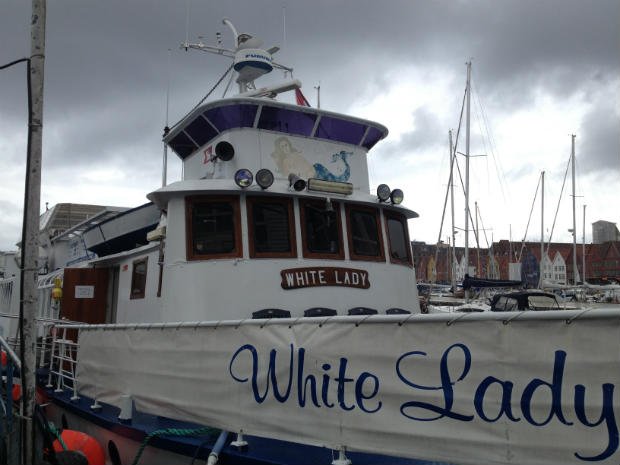 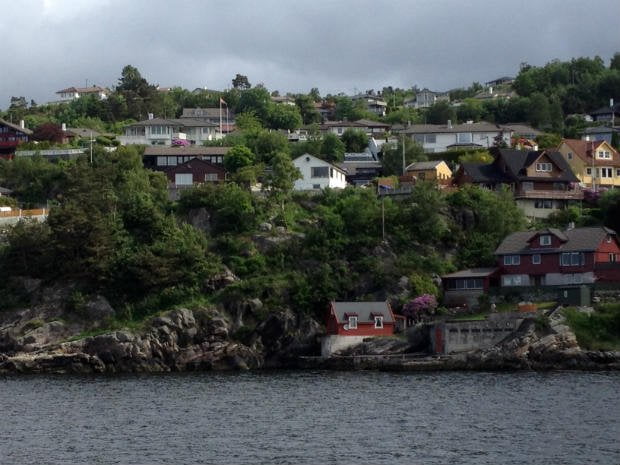 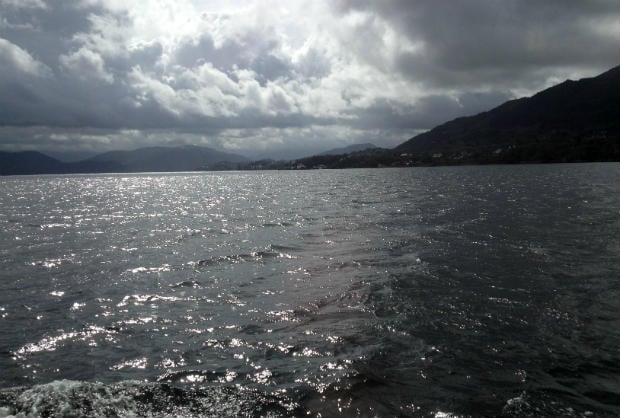 The first hour of the cruise took in some key elements of the region's industry, including the impressive floating bridge Nordhordlandsbrua, the Rolls Royce engine plant, a fishing farm, and even a stop at the petrol station for boats!

Once I got over the unexpected sight of an Esso logo, I noticed the station master's cat, strutting around the quay contemplating joining us on the boat. The great thing about being out on the water is the way your mind wanders, and these little details you start to notice. Kitty stayed on dry land, by the way 🙂 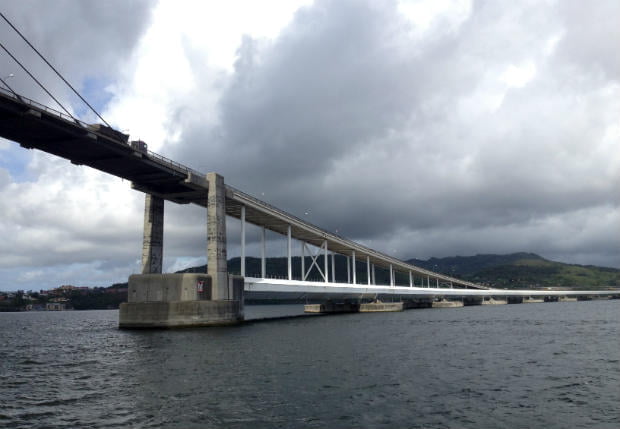 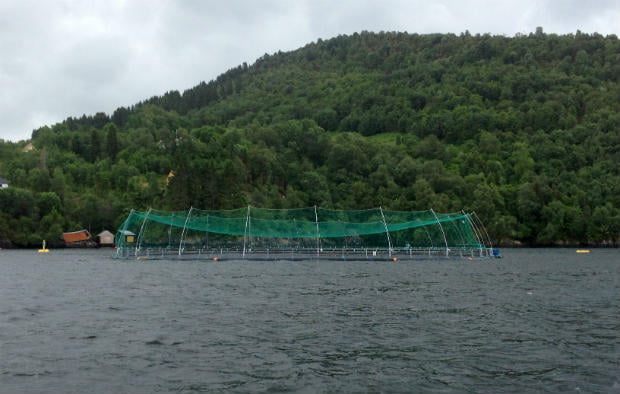 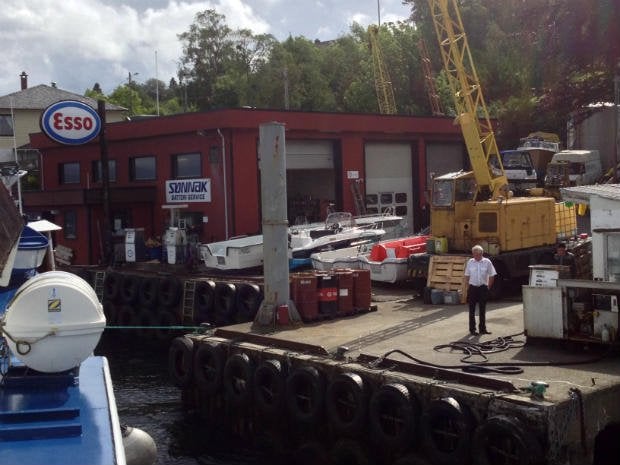 After the industry, came the beauty!

While not as spectacular as the UNESCO-listed fjords like the Nærøyfjord, the waters around Osterøy still offered a good taste of fjord Norway – birds flying around you, sheer cliffs, wooden churches, mountain animals, and isolated communities.

Once again I let my mind wander, contemplating life in a small fishing community – until I remembered I have no idea how to fish 🙂 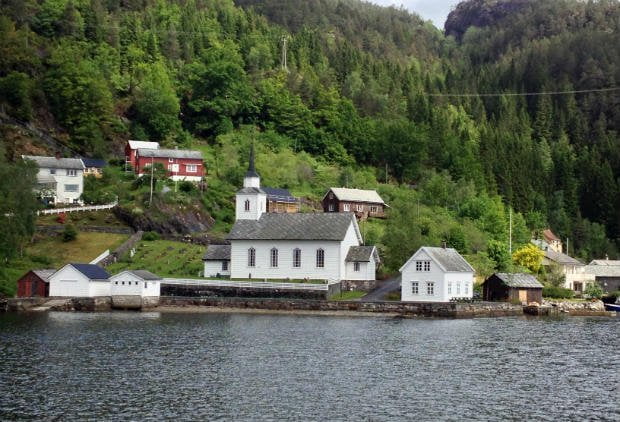 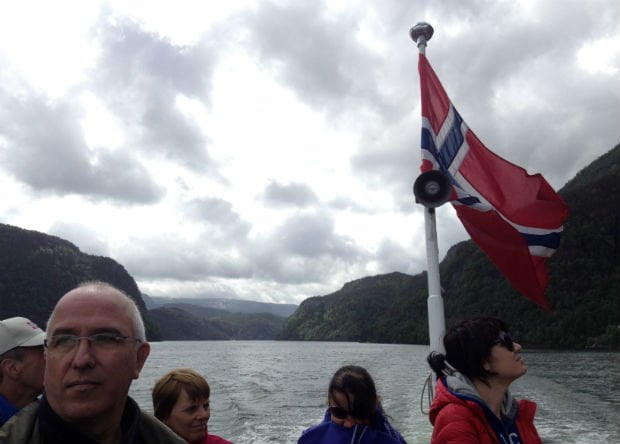 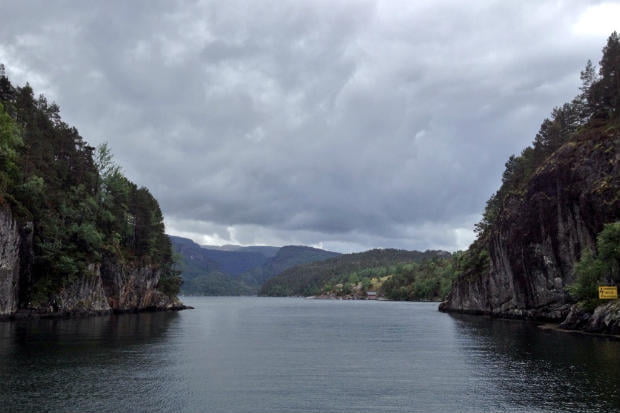 The photograph above shows the narrowest part of the fjord and although it might not seem it, the wind whips through this pass, sending scarves and hats flying! My face had a lovely fresh red tinge to it for the rest of the afternoon!

I was lucky with the weather. Bar short periods at the beginning and end of the trip it stayed clear and dry, enabling me to make the most of the White Lady's three decks. When it did rain I made myself comfortable inside the small lounge, with coffee from the kiosk.

The White Lady returned to Bergen at 2.15pm, allowing me a little time to recharge my batteries (both mental and actual – I took hundreds of photos!) before heading to Bergen Aquarium to continue my watery day.

4 thoughts on “A Watery Day in Bergen Part 1: Osterfjord Cruise”