The colourful Norwegian folk dress has gained in popularity in recent years. We take a look at the history and the detail of the designs.

A bunad is a traditional folk costume that you find all over Norway. Although much more popular with women, men's bunads are also available.

The best time to see the outfit is on Norway’s national day, when the streets are full of bunad-wearing Norwegians of all generations! You may also people wearing one at weddings and other celebrations.

The smart, colourful outfits are made with wool, meant to be tight-fitting, and are adorned with metal buckles, buttons and jewellery. Accessories vary and can even include blades. 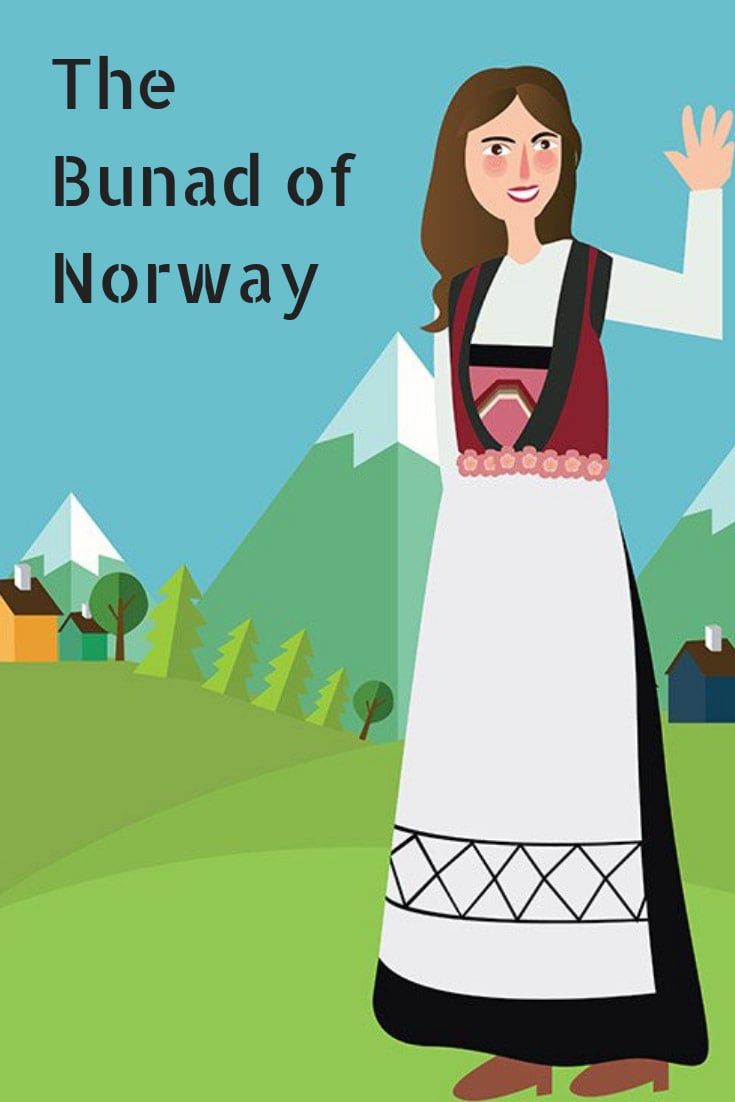 Although believed by many tourists to be a tradition dating back hundreds of years, that's not exactly true. Far from it in fact, as you can see from archive photographs from more than one hundred years ago.

The design of the modern bunad does take plenty of cues from traditional folk costumes dating back a few hundred years. However the modern dress we’re talking about in this article is very much a 20th-century invention.

While we’re on that subject, let’s take a look at how the costume came to be. For that, there’s one Norwegian woman to thank.

The mother of the bunad

The person most often credited with the outfit's ‘invention' – or at least rekindling interest in traditional folk costumes – is Hulda Garborg.

The writer, novelist, playwright, poet and dancer spent many years travelling the country participating in debates and promoting Norwegian culture. This was a tough job, as it was during the time when many families were leaving Norway in search of a better life in America or elsewhere.

During the early-to-mid 1900s, Klara Semb took over the campaign and put the focus on developing “historically correct” bunads. Aagot Noss started to develop a written account of the traditions that modern bunads were based on in the 1950s.

When do Norwegians wear bunads?

Despite the wishes of some camera-wielding tourists, wearing a bunad is not something Norwegians do every day. Day-to-day, simple, practical clothing that suits the Norwegian climate is worn for work and regular social ocassions.

Since a bunad is a festival garment, less ornate traditional dress is more suitable and practical for work situations. Everyday cotton or wool costumes, colored and patterned shirts and aprons, and simpler silver accessories are among the possibilities.

However, the bunad does play an important role in a Norwegian’s major life events and special occasions.

Norwegians use it for various celebrations including weddings and possibly important birthdays and folk dances. It's also often worn on religious occasions such as baptisms, confirmations, and sometimes at Christmas. 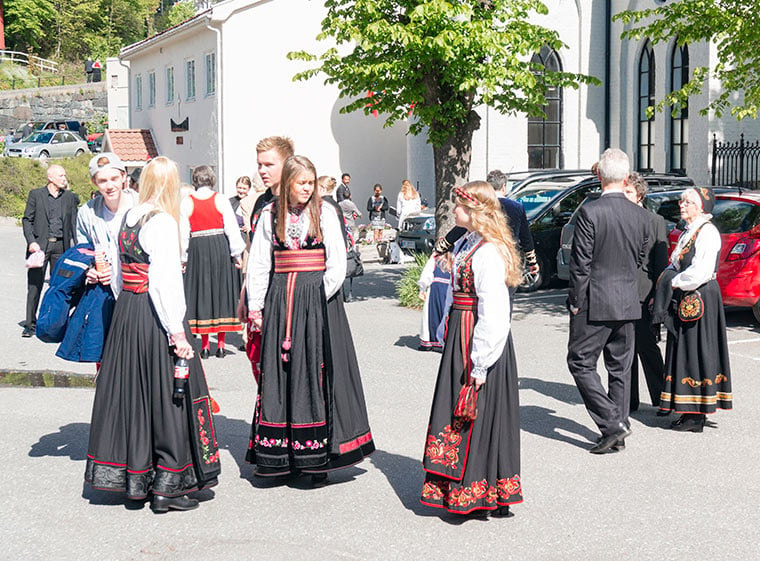 But without doubt the best day to admire the bunad out in public in Norway is on the 17th of May for the country's Constitution Day celebrations, when almost everyone dons the national dress.

Consider getting an everyday (hverdags) dress, which is less expensive and easier to make and care for. If fabrics are carefully chosen and workmanship is excellent, you will have appropriate clothing for traditional events.

The rules of the bunad

Designs vary massively between regions. One primary function of a person’s bunad is to serve as a public appreciation of and homage to your Norwegian heritage in general and to your town or region of Norway in particular.

It is customary to wear a bunad or folkedrakt from an area to which you have a genetic or residential connection. Then you won't have to explain to those who greet you (feeling they've found someone from their region) that you just liked that particular colour!

Your bunad should always display excellent quality fabric and workmanship. It should fit nicely, and be clean and in good repair. Staying in shape to fit in a bunad after many years can be quite the challenge!

Read more: On Wearing A Bunad For The First Time In 20 Years

Because you are wearing traditional (or traditionally related) clothing, conservative makeup and hairstyles are suitable.

More contemporary additions such as earrings, high heels and nylons are out of place. References to the bunad police are made partly in jest!

One of the lesser known facts about the traditional dress is that there are a few hundred local varieties, with some saying there are up to 400.

That's quite a selection for a country of little more than five million people! Here are some of the most notable versions:

One of the most popular regional variants is the Nordlandsbunad, from the county of Nordland. The men's version dating back to 1924 features dark blue stockings and a floral brocade vest over a stand-up collar shirt.

The female version is a rich blue dress with embroidered floral patterns on the skirt and top. Accessories include a shawl, apron, bag and a hat, all in blue of course. The Nordland outfit has regularly won the title “Norway's most beautiful bunad” from the Norwegian media.

Known as “the first bunad”, Hardanger's collection of designs vary in detail but are best known for their distinctive red body and white apron.

It is common to add a belt to the outfit at confirmation. According to tradition, the headgear worn depends on marital status.

With a rich history in textile production and craftsmanship, Telemark in southern Norway is regarded by some as having the “Norwegianest” bunads.

Based on costumes from the 19th-century, Telemark's bunads differ between the west and the east, but at first glance appear similar: both feature a predominantly deep shade of blue, the same cut, and red/green embroidery.

The distinctive elements of the Hallingdal bunads include the contrast between the dark fabric and the vivid colours used in the embroidery.

This bunad is designed without a belt, although one can be added if desired. Embroided headgear is also a common accessory.

While different variations do exist within the vast region, the Trøndelag bunad was created in 1923 in an attempt to create a common bunad for the entire region of central Norway.

Inspired by Roccoco fashion from the 18th-century, it is one of the easiest to spot even though it can come in green, red or blue varieties, the latter being the most common.

Silver was (and still is, in some parts!) a very important material in Norway, steeped in superstition and legend. According to one legend, the silver mines belonged to the mountain trolls as they were such good silversmiths.

For many years silver was used by locals to protect themselves against bad weather and storms, to heal illness, and even to consecrate water. According to some stories, a silver brooch would often be pinned on the clothing of a baby so trolls couldn't swap the infant with one of their own!

Because of this spiritual connection and ancestral value, pieces of silver were often handed down for generations within families.

As with the bunad itself, the design of the associated jewellery varies in design regionally. Some of the silver jewellery often found on a woman's bunad includes:

Typically, less is more when it comes to accessorising the national costume.

We’re getting a lot of questions from this article! We’ll do our best to answer them in this section.

How expensive is a bunad?

This is without doubt the most frequently asked question!

A bunad is a complex and unique piece of clothing that’s designed and produced to last a lifetime. In this world of Asia-produced off-the-peg disposable clothing, it can be easy to forget what a truly handmade item of clothing costs to make.

Prices vary hugely, of course. A typical woman’s bunad made to order will likely cost in the region of 30-40,000 Norwegian kroner. Yes, that’s several thousand dollars.

For a more standard design that only needs minor adjustment, prices start from about 20,000 Norwegian kroner. That’s still a substantial investment, of course!

These days it’s also possible to buy a foreign-made bunad with less quality materials and craftsmanship. It’s going to be much cheaper, but it certainly won’t last lifetime.

Where can I buy a bunad?

You won’t find one in a Norwegian H&M or Cubus store! A bunad is almost always bought from a specialist store. There are independent stores, particularly in smaller counties and/or those that specialise in a specific type.

But there’s also a few national retailers with outlets in some of the bigger cities. They are also likely to have websites with more information or ranges, prices, ordering, etc. Ckeck out norskebunader.no and norskflid.no to begin with.

Well, that’s all for now! The whole team at Life In Norway hopes you’ve learned something about this integral part of Norway’s culture.

We’re not sure we’re qualified to answer any questions, but feel free to ask a question anyway or leave a comment below. You never know who else is reading that may be able to provide an answer.

52 thoughts on “The Norwegian Bunad”