Honningbarna have been on my radar for a while, but it was their recent performance at Øya that compelled me to finally put fingers to keyboard and write about them. Listening to a raucous punk band in the middle of the afternoon is never high on my list, but Honningbarna impressed. It wasn't just me – Norwegian music website Musikknyheter rated the show 9/10.

So, the basics. Honningbarna translates to The Honey Children, appropriate given the young age and looks of the band. They hail from Kristiansand in southern Norway, and alongside twin guitars they have that old punk classic – a cello! The genre suggests they should be dicks, but actually they seem like a nice bunch of lads putting on punk faces. Their popularity in Norway has been built on their energetic live shows. They tour relentlessly and it's definitely the way to experience Honningbarna for the first time. 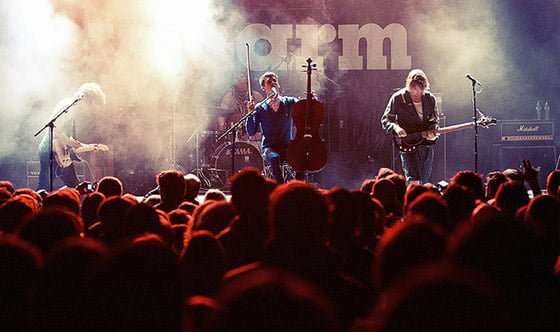 In a recent interview, lead singer/cellist Edvard Valberg said of what punk means to him: “Fun. Desperado attitude, but intelligent, because if nobody else is going to save the world, then you better start doing it yourself.”

My mate Darryl has seen them live a few times in more intimate venues: “Honningbarna's live shows are full of energy, and they really get the crowd going. Edvard Valberg (singer/cello) is often found in the moshpit, singing and jumping along with the crowd when not waving his bow like a madman on stage.” The band first became known by winning national broadcaster NRK's Årets Urørt competition for unsigned bands, with their song Borgerskapets utakknemlige sønner:

If you hadn't already realised, they sing in Norwegian. It's a language often said not to be suited to lyrics, but in punk and metal it works well. Their second studio album Verden er enkel is out now, featuring the brilliantly named Fuck kunst (dans dans), kunst meaning art in Norwegian, before you start giggling.

Featuring a cello, a Hammond organ, two guitars, a bass, a drum kit, and loads of fresh young anarchism, these guys certainly made one of the most killer first impressions on an audience I’ve seen in a very long time — shortandsweetnyc / Christine Thelen

Last but not least, the inevitable Clash cover:

If punk isn't you thing then Honningbarna aren't going to win you over. But if it is, you might just have found a little gem. They hit the road in September and October, playing a variety of dates in England, Scotland and Ireland, along with the rest of Europe.