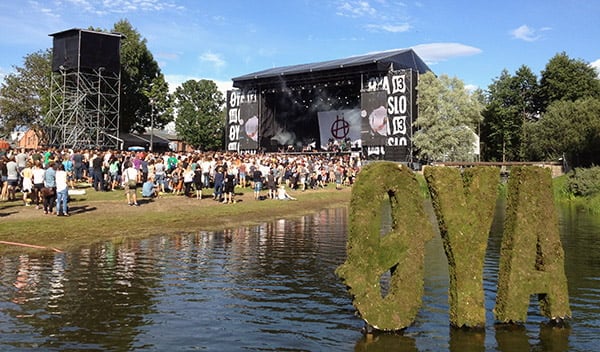 Despite my love of music and festivals, and this being my third year in Norway, this month was my first ever visit the annual Øya festival, an event that battles with Norwegian Wood to be known as Oslo's biggest.

I nearly didn't make it this year either as tickets sold like hot cakes. Thankfully, when Kraftwerk were added to the bill late last year a bunch of extra day tickets were released, and I'd booked one within minutes of the announcement.

Øya is in fitting with the Norwegian lifestyle. It's… well, it's NICE. Almost too nice to be termed a festival. It has more common with the cutesy artyness of Moseley Folk Festival than of Reading and Leeds, for example.

You can buy decent food, enjoy a peaceful pint (sorry, half-litre) by the water, and go home at the end of the day rather than try in vain to pick your tent out of a sea of thousands.

This isn't a problem per se, but you do need to set your expectations to family-friendly rather than mosh-pit. 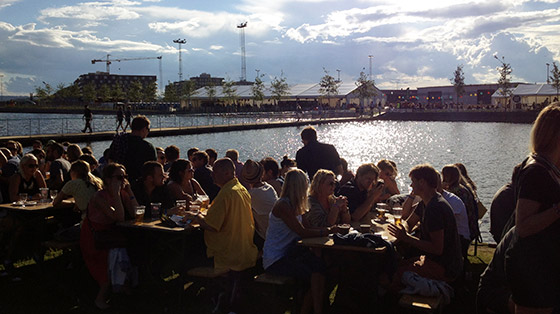 The setting for Øya adds much to the atmosphere. Held in Oslo's Medieval Park, you have to navigate around ancient ruins as you arrive, taking care to avoid the various expanses of water surrounding the site.

As the sun set over the backdrop of Oslo's sparkling new Barcode development, I must admit I did miss the city I left just a few months ago.

The site is spread out over four stages but unlike most major festivals, there are only one or two bands playing at any one time. On the plus side this means less chance of a clash of bands you want to see, but it also means less choice, and potentially long periods of time with nothing to do.

First up when I arrived on Friday were Norway's young punk breakthrough Honningbarna. It was the first time I'd seen them live and I'll definitely catch them again if/when they make it to Trondheim.

Next for me was Mø. She's been compared to Grimes, Lykke Li and Björk, but although you can categorise her as electropop that's where the comparison ends.

It wasn't terrible, just pretty average, and I meandered over to the Mathallen tent after just four songs, especially as the fingers-in-the-ears James Blake was to follow.

Then came the best part of any festival, hanging out with people! I left Dave & Darryl to catch up with some old friends from Oslo and spent an hour chatting and experimenting with some newly-learned Norwegian.

We had a great spot next to the water and the time flew by despite little musical entertainment on offer. After an hour or so I returned to the beer tent to look for Dave & Darryl for some pre-Kraftwerk food – I plumped for the pulled pork bap from the Mathallen tent.

I demolished mine but Dave threw his away after one bite – different strokes for different folks. Anyway back to the music!

To pass the time before Kraftwerk we caught the end of Nils Bech, a camp Norwegian who loved taking his clothes off and giving out bits of plants to the crowd. I'm sure that somewhere, sometime, British Sea Power and Patrick Wolf got together and made him on a 3D printer.

And so on to the main attraction of the day for me, and judging by the average age of the audience most of them too, Kraftwerk.

They were founded in Germany a whole 11 years before I was born, and somehow one of the founding members, Ralf Hütter, is still going strong at the grand old age of 66. Kudos to you, my friend!

I'm not going to sell Kraftwerk to you here, their particular brand of electronic music is something you either like or you don't.

Their live show is renowned for being four blokes stood in front of their keyboards, but lately they've added a new 3D visual element to their performances. 3D glasses were given out and it was quite a sight to glance around and see thousands of people wearing them, it must've looked awesome from the stage.

The 3D was more than just a novelty, it added an element of performance art to the show that kept my interest throughout.

It wasn't the best live show I've ever seen, not by a long shot, but it was a great way to catch a band I never thought I'd get the chance to see. I doubt this show would've converted general festival-goers, but it went down a treat amongst the fans. The burning question – will I return to Øya next year? The festival is moving to Tøyen Park because of work on the nearby railway, so I am tempted to go as it's the first year at a new venue.

But Oslo is now a long way for me to come regularly, and with a number of festivals in and around Trondheim throughout the year – Pstereo, Trondheim Calling, and Nidaros Blues to name a few – it will depend on the line-up.