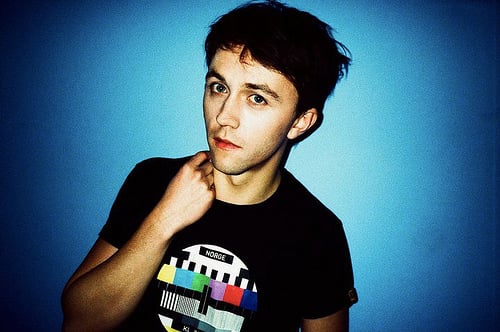 His first three albums demonstrated his technical ability to construct the perfect pop song, none more so than Two Way Monologue. The video is quite cute too. Look!

But then in 2007 he discovered an amplifier! He began to experiment… Phantom Punch is the fascinating result, adding a pacy urgency to the previous formula, so it's no surprise to discover it was recorded in LA. Horror swept over me when The Tape opened with more than a nod towards the Distillers' Drain the Blood, however, rather than turning into a Brody Dalle scream-a-thon it settles into a spiky pop sound, setting the tone for the album.

In the same year Sondre did a Badly Drawn Boy and composed the soundtrack to a naff film, Dan in Real Life. Naff yes, but it did give him plenty of exposure such as an appearance on Letterman and the opportunity of a duet with Regina Spektor.

Heartbeat Radio was his finest work, full of new influences and a somewhat happier tone. I like music that makes me smile! Which is probably the reason I love the cover of bop-de-bop classic Mr. Bassman, produced for the Muppets' Green Album last year.

His most recent album sees Sondre return to what he's best at, picking up a guitar and crafting a delicious pop song, probably the reason for its eponymous title.

His website tells me he's doing a tour of Norway's record shops over the next few weeks, I'll do my best to get down to one.