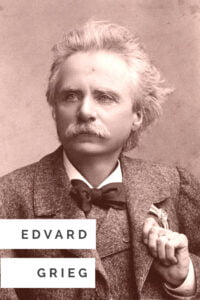 The Norwegian composer and pianist continues to influence music in Norway to this day.

Widely considered one of the leading Romantic era composers, Edvard Grieg is one of the world's best known classical artists.

Born into a musical family in Bergen in 1843, Grieg started showing a great interest in music – and the piano in particular – at a young age. According to stories, he would sit by the piano for hours, exploring all kinds of sounds and harmonies on his own.

Grieg's use of Norwegian folk music in his compositions put the music of Norway on the international stage. But while he was a national symbol and a proud Bergen resident, Grieg spent many years learning his craft abroad.

He moved to Leipzig to study music at the age of 15 and also spent considerable time in Copenhagen and Rome. While in Leipzig, Grieg contracted a form of tuberculosis which would affect him for the rest of his life.

In 1867 he married his first cousin, Nina Hagerup, and the pair often performed together to great reviews. Their only daughter, Alexandria, sadly died from meningitis at a young age.

After composing the music to Peer Gynt, Grieg became conductor of the Bergen Philharmonic Orchestra, and a few years later moved to the Troldhaugen country estate with his wife.

His most widely known work amongst the general public is undoubtedly the music from Henrik Ibsen‘s play Peer Gynt. Originally composing 90 minutes of orchestral music for the play, he later went back and extracted certain sections for the suites.

If you think you don't know any of Grieg's music, listen to In The Hall of the Mountain King for an a-ha moment:

The Who, ELO and Savatage are among the artists to have recorded covers or otherwise incorporated elements of In The Hall of the Mountain King into their work.

It's widely reported that although Grieg gleefully accepted Ibsen's request to compose the music, he struggled with the project for many months.

Grieg's wife once wrote: “The more he saturated his mind with the powerful poem, the more clearly he saw that he was the right man for a work of such witchery and so permeated with the Norwegian spirit.”

His legacy in Bergen

Norway's second city is fiercely proud of its most famous son, who was born in the city and died there at the age of 64. His country estate Troldhaugen is now one of the city's most popular tourist attractions.

In 1995, a museum building was added to the estate, featuring a permanent exhibition of Grieg's life and music.

In the villa’s living room stands the original Steinway grand piano, which he was given as a silver wedding anniversary present in 1892. Private and public concerts are frequently held at the estate.

In the city itself, several statues of the composer stand proudly alongside some of the most important cultural buildings in Norway.

Grieg had a genius ability to create perfect melodies rooted in the national folk tradition of Norway. He was an innovative harmonist and became a model for many European composers. The secret behind Grieg's world fame lay in his ability to create new piano music that could be played by amateurs in homes all over the world – Harald Herresthal

I'll leave you with another a-ha moment: