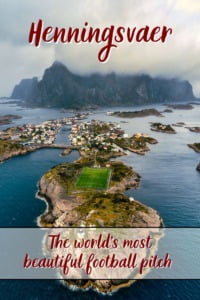 We take a closer look at the famous football ground in Henningsvær, a lively fishing village in Norway's Lofoten islands.

It's one of the most iconic football pitches in the world. Thanks to football websites and Twitter accounts, most football fans have seen this spectacular photo of Henningsvær's local football pitch.

As a football fan, I've been to many of Norway's best football grounds. So when I was passing through the Lofoten islands recently, I couldn't resist a closer look.

The pitch and its stunning setting has been referenced in media all over the world. In fact, the world governing body FIFA said the world-famous football pitch “assaults the senses”:

“For those fortunate enough to play on it, there are the scents of the salt air – and the fish – that come from being surrounded by sea and row upon row of cod-drying racks.”

“The sound of the ball being kicked, curses and shouts of encouragement also arrive accompanied by those of birds calling and waves crashing on the adjacent rocks. For the rest of us, it is simply a feast for the eyes” – FIFA.com

The UK's Mirror newspaper is among the media to have covered the ground: “It may be tiny. It may have no seats. But this little pitch on a Norwegian island might be the best place in the world to play football.”

That's just a taster of what the world's media had to say. Now, let's take a trip to the Lofoten islands for a closer look.

Henningsvær is one of the most famous fishing villages on Northern Norway's Lofoten Islands. And with very good reason. That famous mountain backdrop is a stunning setting for the village spread over several small islands. No matter which direction you look, there is something to catch the eye.

But this is no sleepy fishing village. Industry remains here, but tourism is flourishing as is a surprising arts scene. Several art galleries including one in a former ‘kaviar' factory have attracted a community of creatives to the village.

This was my second visit to Henningsvær. The first time, many years ago, was in April and the village felt tiny. This time it was bustling with summer tourists and felt a much bigger place. Yet just 500 or so people live here permanently.

As a tourist destination, it's a great base for outdoor activities including rock climbing, deep sea fishing, kayaking, snorkelling and hiking. It's also the base for the North Norway Climbing School.

The football pitch is located at the south of the village. The walk there takes you through the village centre and along a path lined with the iconic Lofoten fish drying racks. It's certainly not like any other walk to a football ground I've seen before!

The pitch is owned by Vågan Kommune, the local municipality, and run by local amateur sports club Henningsvær IL.

Given its location north of the Arctic circle, it shouldn't surprise anyone to learn that the pitch is artificial grass. In fact, that's the case even with many professional stadiums in Norwegian football.

There are no grandstands and no terracing, although the rocky areas surrounding the field offer an elevated view!

The only facilities come in the form of a small clubhouse and floodlights, although these are not always needed in the summer due to the midnight sun. From May 26 to July 17, the sun doesn't set in the Lofoten islands.

The clubhouse is open during the summer months as a small kiosk staffed by local volunteers from the youth teams. Visitors can buy coffee, soda, and simple snacks. And yes, there's a bathroom available for a small charge.

It's a great fundraising idea for the small amateur sports club as there was a constant trickle of visitors during the half-hour or so we spent at the pitch. Many people were from abroad, including a couple of Americans and an Italian family.

The local sports club Henningsvær IL operates the football pitch. Because of the small size of the village, the club hasn't run any adult teams for many years.

However, there are a handful of youth teams (boys and girls) within the club that use the pitch. That's clear to see upon arrival from the number of smaller goals piled up along the touchline.

As a municipal facility, it's also used as a sports field by children from the local school. The pitch has even been used as the location for a performance as part of the well-known Lofoten International Art Festival.

The club also rents out its small clubhouse and facilities. It's also possible to rent the entire facility. Recently, Jeremy Clarkson, Richard Hammond and James May did just that to film an episode of The Grand Tour, coming out later this year.

Finally, if you're planning a visit of your own to Henningsvær, make sure you know the rules!

Access to the ground does actually close overnight, so no camping is permitted.

However, there's nothing to stop you bringing your own ball and scoring a goal on one of the world's most spectacular football pitches! Unless there's a game going on, of course…