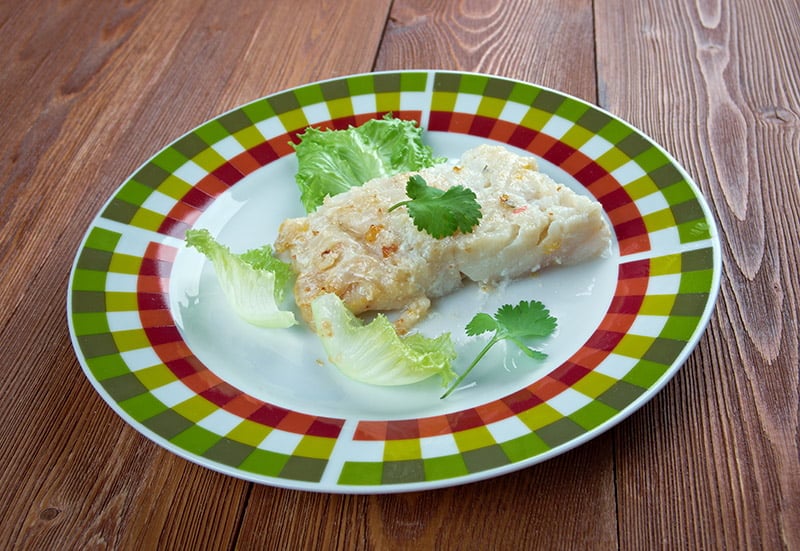 A Norwegian dish that divides opinion like no other, lutefisk is a traditional fish-based dish eaten in the months before Christmas.

This morning on my daily walk to Jerbanetorget, I wandered past the Norwegian restaurant Dovrehallen, as usual. Panic set in as I saw the latest addition to the menu – lutefisk.

The time has come for me to write about this oh so very Norwegian of dishes!

You love it or hate it

Yes folks, lutefisk season has begun. Perhaps the best way to explain lutefisk is as the Norwegian version of Marmite. For those non-Brits out there, that means something you either love or hate. Although I have a sneaky suspicion that those who claim to love lutefisk, really don’t!

“It can be tasty, but the statistics aren’t on your side. It is the hereditary delicacy of Swedes and Norwegians who serve it around the holidays, in memory of their ancestors, who ate it because they were poor. Most lutefisk is not edible by normal people” – Pontoon

So, lutefisk starts out its life as cod. Lovely, fresh cod! I believe other white fish can be and is used, but cod is by far the most common. Surely it can't be all bad then, I hear you say? Hold on! This is what happens next.

The cod is then air-dried. Once it's ready to be cooked, it is soaked in water for several days, with the water changed each day. Lye is then added to the water for two days. At this point, the fish loses some of its proteins and turns jelly-like. 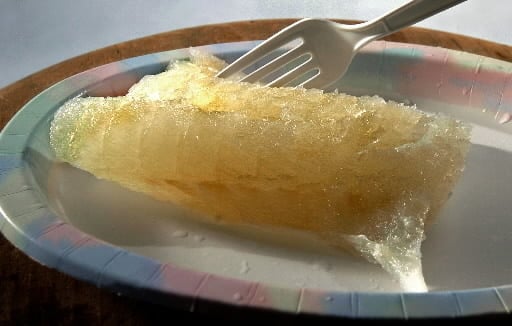 After this process, the fish (I'm not sure that fish is the right word at this stage, but let's keep on going) is soaked in cold water for up to six days. Once again, this water has to be changed daily. This process brings the acidity of the fish down to the point where it becomes edible. I say edible, but that's a point open for debate, of course!

How is lutefisk cooked?

Cooking the lutefisk takes skill, as its jelly-like consistency means it can easily fall apart. Most experts suggest coating the fish in salt about half-an-hour before cooking. This releases some of the water, making cooking easier. However, all the salt should be thoroughly rinsed off before cooking. Once cooked, the fish resembles fish once again!

Cooking methods vary. Because of the amount of water already in the fish, it's not necessary to add any. One method is to salt the fish and place it in a sealed pan to steam under a low heat. Others choose to wrap the fish in foil and bake it.

How is lutefisk served?

If you go to a traditional Norwegian restaurant, it's highly likely the lutefisk will be served in a very specific way. The meal is traditionally served with fried bacon bits on the fish, and boiled potatoes, mashed green peas on the side. There's usually a blob of melted butter for good measure.

Now I'm all up for trying new things. Since moving to Norway I've tried Norwegian produce such as brown cheese and akevitt, but I draw the line at lutefisk. As does this chap:

“Lutefisk is not food, it is a weapon of mass destruction. It is currently the only exception for the man who ate everything. Otherwise, I am fairly liberal, I gladly eat worms and insects, but I draw the line on lutefisk” – Jeffrey Steingarten interview, Dagbladet

I'm told the taste of lutefisk is actually very mild, but it's the consistency that bothers people. That, I can totally believe!

By the way, lutefisk is also popular in certain communities in the USA that celebrate their Norwegian American heritage. Methods of cooking and side dishes vary. White sauce instead of butter seems to be the most common change, along with using lefse as a side.

Why is lutefisk a thing?

Honestly, this was my reaction when I first heard about the dish. “Why would you choose to eat that instead of fresh fish, in a country that has an abundance of incredible quality fresh fish!?”, or some such words.

The reason, of course, is tradition. Lutefisk—and in fact the dried fish from which lutefisk is made—harks back to a time before refrigeration. Stockfish, when kept dry, can last for years with its nutrition more or less intact.

By drying the cod in the cold wind, of which Norway has in abundance, all the moisture that attracts bacteria disappears. The drying process shrinks the fish, making it much more efficient to store or transport to rural areas that didn't have a fresh fish supply. Soaking the fish in the lye solution would expand the fish to an even greater size than its original size.

Families would store the shrunken stockfish in a dry shed. When they wanted to prepare lutefisk, they would begin the soaking process.

I'll close with an old Ole and Lena joke: “Well, we tried the lutefisk trick and the raccoons went away, but now we've got a family of Norwegians living under our house!”

Do you know people that would enjoy this article? If so, please share on Pinterest! We've got just the pin for you: 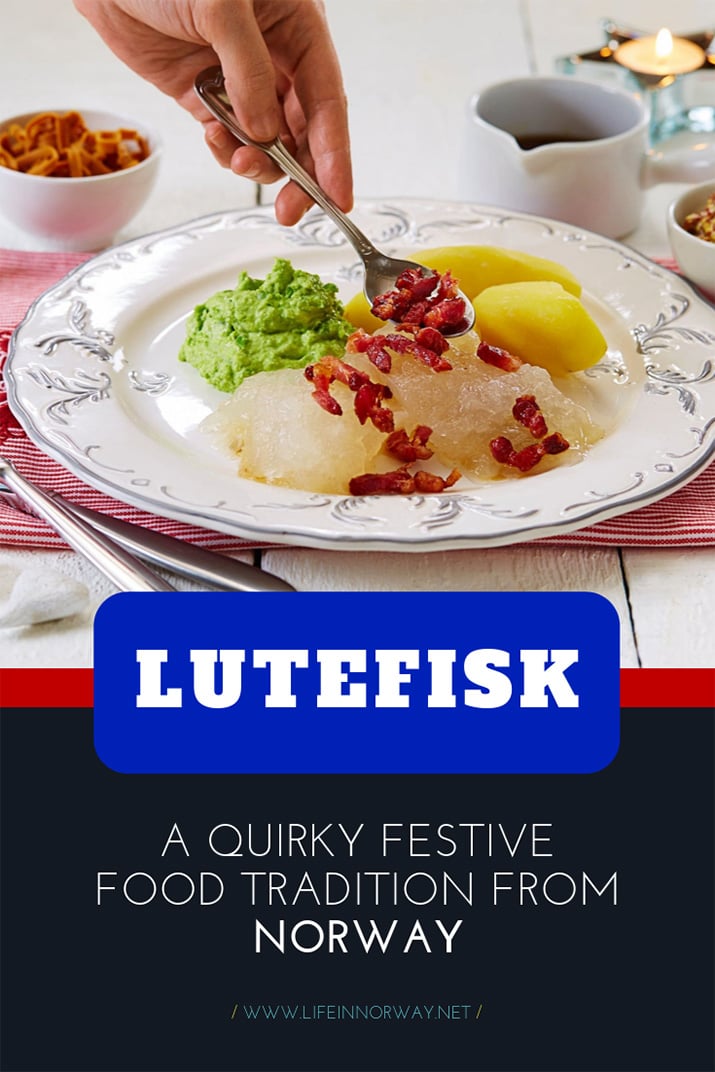