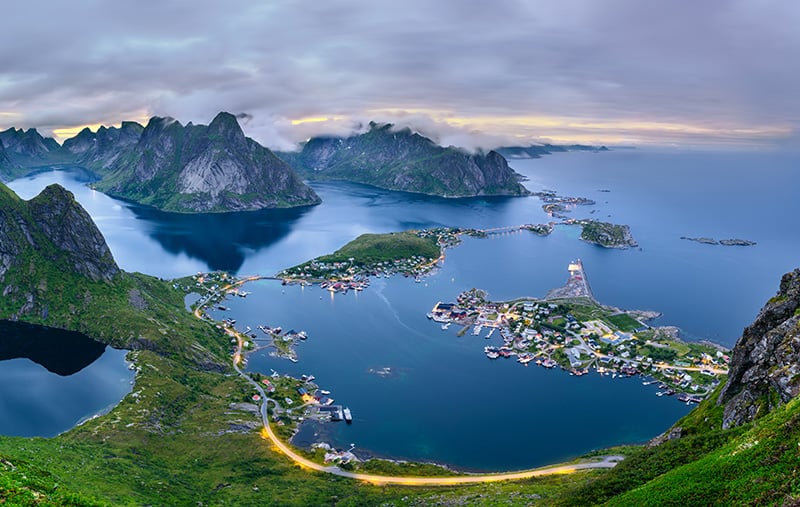 The Norwegian Labour party leader Jonas Gahr Støre announced at the party's conference this weekend that they are withdrawing support for oil drilling in the delicate environment of Lofoten, Vesterålen and Senja. It marks a dramatic shift in policy for a long-term ally of the industry.

The waters off the coastline of northern Norway are believed to hold significant oil reserves. Petroleum companies such as state-controlled Equinor (formerly Statoil) have long said access to the area is vital to keep Norway’s oil age alive.

That's because it's believed to hold about 1.3 billion barrels of oil and gas. But the area is also one of outstanding natural beauty. Look:

Environmental campaigners have long criticised the plans to exploit the area. Increased tourism is already becoming a problem for Lofoten. Vocal campaigners believe that the oil industry moving in could cause irreversible damage to the pristine natural environment. Others worry for the important fishing industry.

While the announcement doesn't guarantee Lofoten's waters will never be exploited, it does make it seem much more unlikely.

A blow to pro-oil parties

When the Liberal party joined the coalition last year, the pro-oil government agreed to put Lofoten exploration on hold. It was the latest in many political deals on the topic, which has been one of the most controversial in Norwegian politics for several years.

Despite leading the centre-right coalition into its second term, the Conservative Party and Progress Party have been unable to proceed with their planned impact studies because of the need to include smaller anti-oil parties in their coalition to secure a parliamentary majority.

Despite not being a part of the coalition, the Labour Party is the largest in the Norwegian parliament. That means their decision gives a large parliamentary majority against opening up the area for exploration.

Grumbles in the Labour party

A majority of local Labour groups in the region opposed an impact study, the first step required for exploration. But not everyone was sure that the party's leadership would agree. Many trade unions, on which Labour's traditional power base is built, are unhappy.

“It creates imbalances in the policy discussions for an industry that’s dependent on a long-term perspective and we can’t accept that,” said Frode Alfheim, the leader of the Industry Energy union. “There’s probably a lot of people in the industry who are wondering what Labour actually stands for.”

Is Norway falling out of love with oil?

The news comes hot on the heels of the Wealth Fund's signal that it will begin pulling its investments from petroleum exploration stocks. The shift in strategy will affect 1.2% of its equity holdings, worth about 66 billion Norwegian kroner. That’s approximately $7.5 billion US Dollars.

Labour aren't totally opposed to oil exploration, however. Støre said his party will continue to be a supporter of the industry and back the existing system of tax incentives. But at the same time, he said he wants oil companies to commit to a deadline for making their operations emissions-free.

Industry Energy's Alfheim said tougher requirements could be a good thing for the industry. But he added that authorities need to use ‘both stick and carrot’.

Focus switches to the Barents Sea

Now that the fight for Lofoten appears to have been won, environmental activists are turning their attention elsewhere. The next likely target for the oil companies is the Barents Sea.

However, news this week reveals that none of the exploratory wells that have been drilled in the Barents Sea along Norway’s maritime border with Russia have met expectations.

Greenpeace, one of the most vocal opponents of exploration near Lofoten, told Bloomberg it’s getting increasing support from the public.

“Oil games around the unsettled Lofoten issue have kept a lot of other important environmental debates pending. I look forward to focus fully on reducing emissions and protecting other areas as soon as Lofoten is permanently protected,” said a spokesperson.