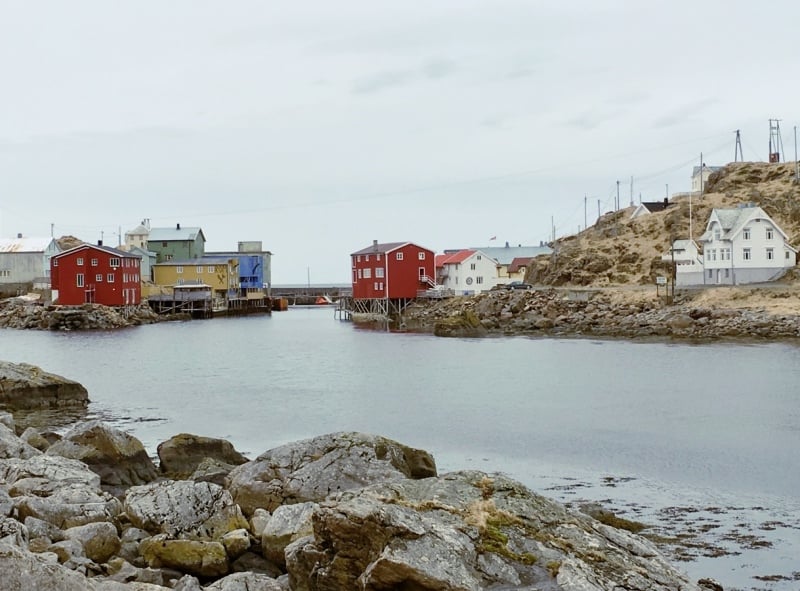 Ignored by many in favour of Lofoten, the nearby Vesterålen archipelago has a quiet charm. Come take a look on this photo tour of these remote islands.

On my recent Moon Norway research visit to Lofoten, I took an unplanned detour north to the Vesterålen islands. And I'm so glad I did! It would have been a crying shame not to include these islands in the book.

They are unknown by many presumably because of their much more famous big brother of Lofoten. Yet the Vesterålen islands offer a similar experience, just without the crowds.

While the peaks are not as ragged and the scenery not quite as dramatic, the islands are no less enjoyable. What's more, they are absolutely perfect for a meandering road trip. Won't you join me for a quick tour? Let's go!

Where is Vesterålen in Norway?

Lofoten is easy to spot on a map of Norway. Once you've found Lofoten, it's easy to find Vesterålen! Just look for the strip of islands sticking out of the western edge of northern Norway.

Whereas Lofoten juts out to the west, Vesterålen is to the north. The largest town, Sortland, lies at 68.4 degrees north. The northernmost point on the islands, Andenes, lies at 69.12 degrees. As with Lofoten, getting to Vesterålen is a bit of a challenge. But, that just makes the journey there part of the experience!

One of the first towns you come to (assuming you take the Melbu-Fiskebøl ferry from Lofoten) is Storkmarknes, the historical home of the famous Hurtigruten shipping company. 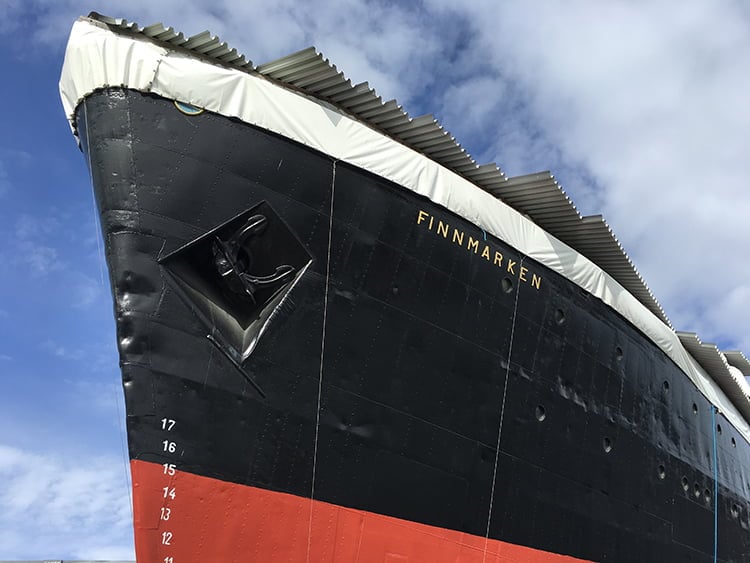 Stokmarknes is a typical small Norwegian town with not a lot to interest the passing tourist. The one exception is the Hurtigruten museum. However, this is much more than a room full of dusty old passenger manifests and uniforms!

Today one of the original passenger ships, the MS Finnmarken, forms the base of the impressive museum. Trust me, you can't miss it! The plans for an improved museum in the future look spectacular, too.

The blue town of Sortland

Similar to many small north Norwegian towns, Sortland is an ordinary looking place that simply provides accommodation and services in an area of outstanding natural beauty.

There's never been much to see in the town itself, until one local artist decided to turn his home town into a three dimensional artwork using a blue colour palette. Read the full story here. 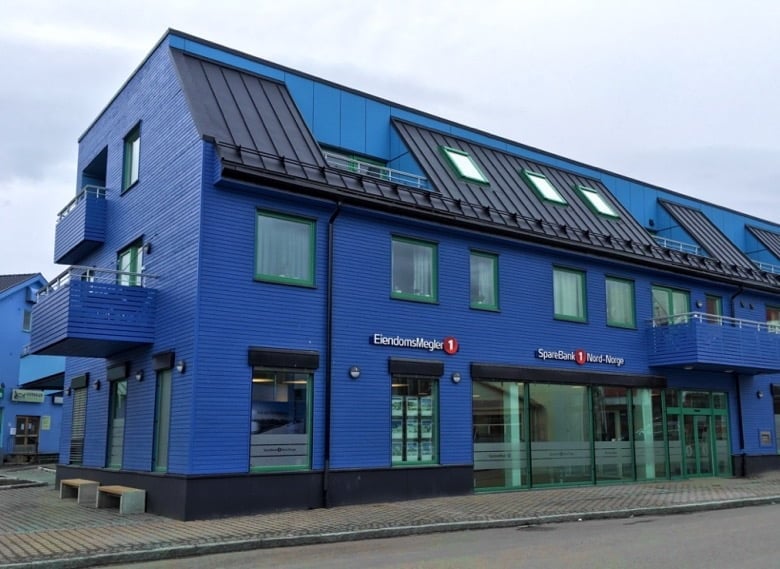 As the largest town on the island, Sortland is a handy place to stop and refuel. That goes for your car and your bodies too! There are a few hotels, supermarkets and a shopping centre so you can stock up before heading out into the more remote parts of the islands.

By the way, although it's the largest town on the islands, the population is barely more than 5,000. That means even if you stay here for a night, you won't be ruining your peaceful island experience too much!

Nyksund, the ghost village no more

Just over an hour's drive north of Sortland is this curious fishing village. Abandoned in 1970 when the local fishing industry shut down, the village has recently enjoyed a fresh start with a number of entrepreneurs opening lodgings, galleries and cafes.

It's still an exceptionally quiet place, so it could be just the ticket if you're looking for a peaceful getaway. This is especially true outside the summer. The drive along the coastal access road is quite the experience, too!

It's a long drive through a great deal of nothing to get to Bleik, but it's worth it for the spectacular beaches and scenic coastal walks. This particular picture was taken on an April morning. It's hard to believe I'm in the Norwegian Arctic, right?

Despite its small population of just a few hundred permanent residents, Bleik is a relatively popular stop on Andøya island. That's partly for its beach, but also for the campsites in the area. 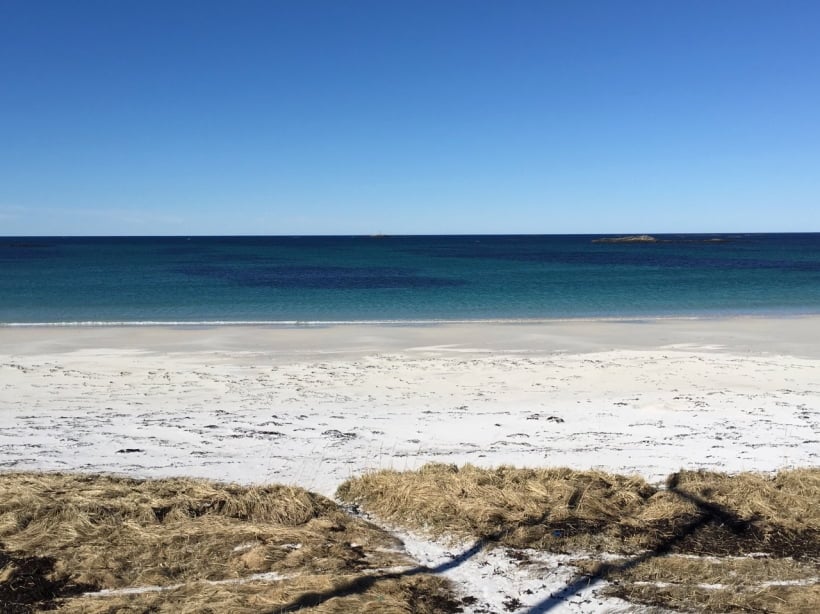 A little north of Bleik is one of the more curious attractions in all of northern Norway. The Andøya Space Centre conducts serious space research working with organisations like NASA and the European Space Agency, but it's possible to visit too. The visitor centre called Spaceship Aurora has recently been expanded.

The distinctive red lighthouse of Andenes at the most northerly point of Vesterålen is now a protected site and a real symbol of the town. It marks the end of your journey, or perhaps more accurately the half-way point.

Built in 1859 and automated in 1978, the lighthouse emits a light that can be seen up to 21 nautical miles away. The lighthouse is only in use from August to April, because of the midnight sun. 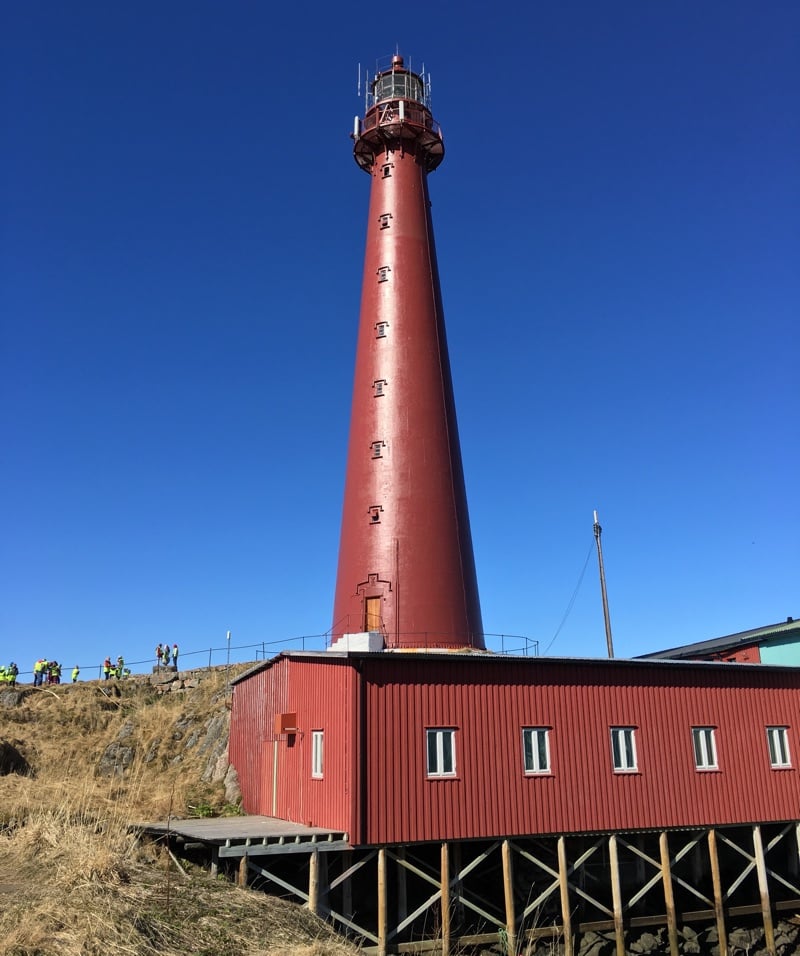 You may be surprised to find a relatively large town in such a remote spot. Around 2,500 people live in Andenes year-round, so the town has services such as supermarkets, restaurants and cafes. There's a couple hotels too.

One of the reasons the town is sustainable is the local airport, which has come under threat in recent years. Economically, the town has always been dependent on fishing. Today, tourism is an important element to the economy. Several companies offer fishing trips and whale-watching trips at certain times of the year.

Dverberg is a small residential village on the eastern side of Andøya. There's not much to persuade drivers to pull over in the village itself, but there is just to the north of the village. 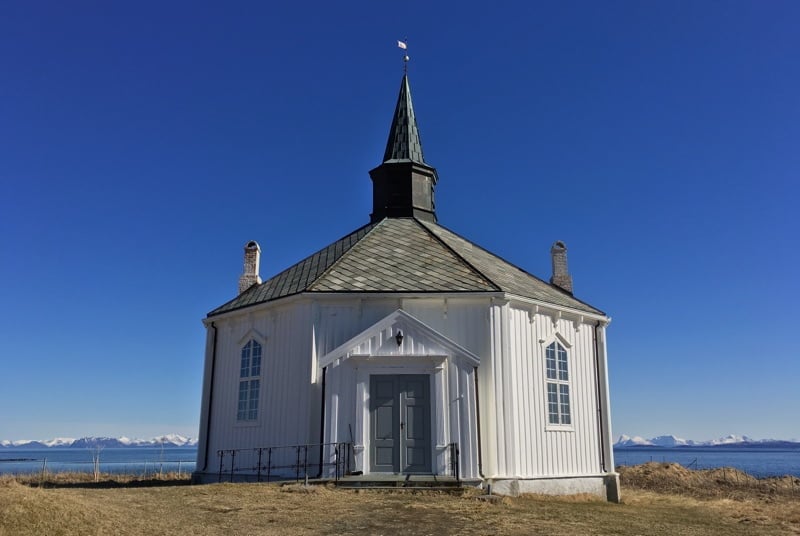 This old octagonal wooden church overlooks the water and beautiful beach at Dverberg. It's easy to see and pull over from the main road. It's unlikely the church will be open as there is a more modern church in the village itself for regular use. However, it's still a stop for photos and a wander.

Given the mountainous terrain, most of the roads around Vesterålen are inevitably along the coast. That's why this is such a good area for road trips! There's so many random places to stop the car and enjoy the scenery, take pictures, or just relax with a picnic. 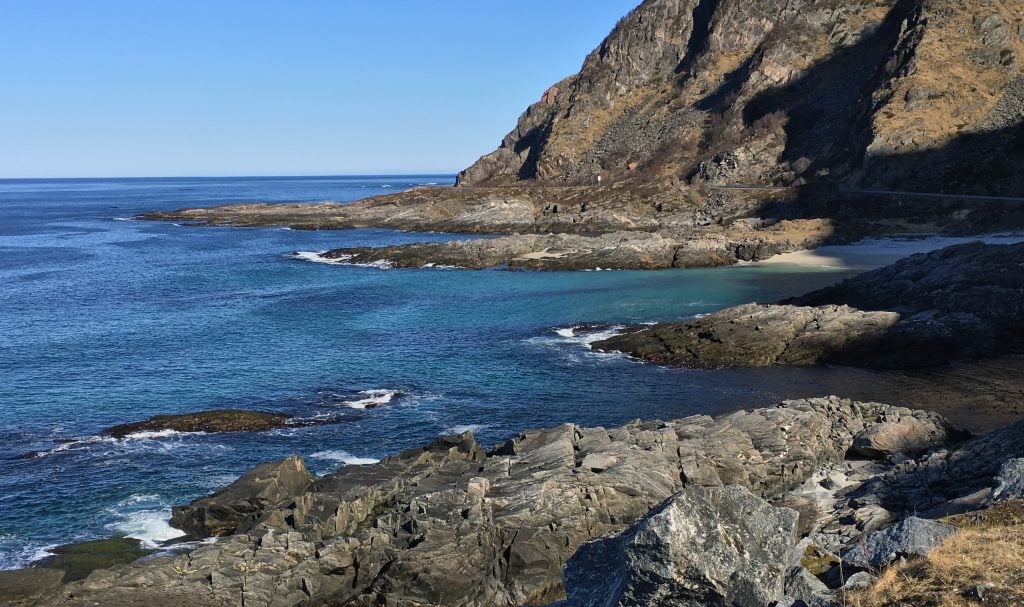 The road on the western side of Andøya island is one of Norway's 18 National Scenic Routes. This means the road has received investment in better rest stops and maintenance. The routes are overseen by an Architecture Council including an architect, landscape architect, and visual artist, while an arts curator helps ensure that internationally valuable works of art are part of the driving experience.

The Andøya Scenic Route follows the cultivated land sandwiched between mountains and open ocean. Depending on the time of year, it's a great place to see wildlife, both in the air and in the ocean. Since achieving national scenic route status in 2012, the Andøya road trip has been increasing in popularity. But that doesn't mean it'll be busy!

One last piece of advice: don't rush this drive! You can easily cover the distance in an hour, but that's not the point. You'll want to allow plenty of time to stop and enjoy this beautiful coastline.

Have you been to Vesterålen? What's your favourite spot? 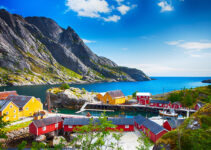