Learning to fish on a lake and prepare rakfisk is one step journey on the road to typisk norsk!

I am currently enrolled in an adult learning program to learn the Norwegian language. One of our reading prompts is “Typisk Norsk”. To quote one sentence from the prompt, Norwegians “gå på tur i allslags vær” (go on trips in all types of weather

To the family cabin

This sentence alone brings back the feeling of my 2nd week living in Norway. My girlfriend’s family and I headed up to her parents’ fishing cabin. It is a small cabin in Jotunheimen.

After packing our clothes and toiletries, the four of us hopped into the car and pulled out of the farm’s driveway. Without a word, I knew her dad was excited to go because he pulled out of the driveway eyes set on the road ahead not hesitating to accelerate the vehicle.

I’m used to the nice wide highways of the United States so as we passed Skåbu the drive started making me feel nauseous because of all the twists and turns. After about an hour and 20 minutes we got to the cabin. 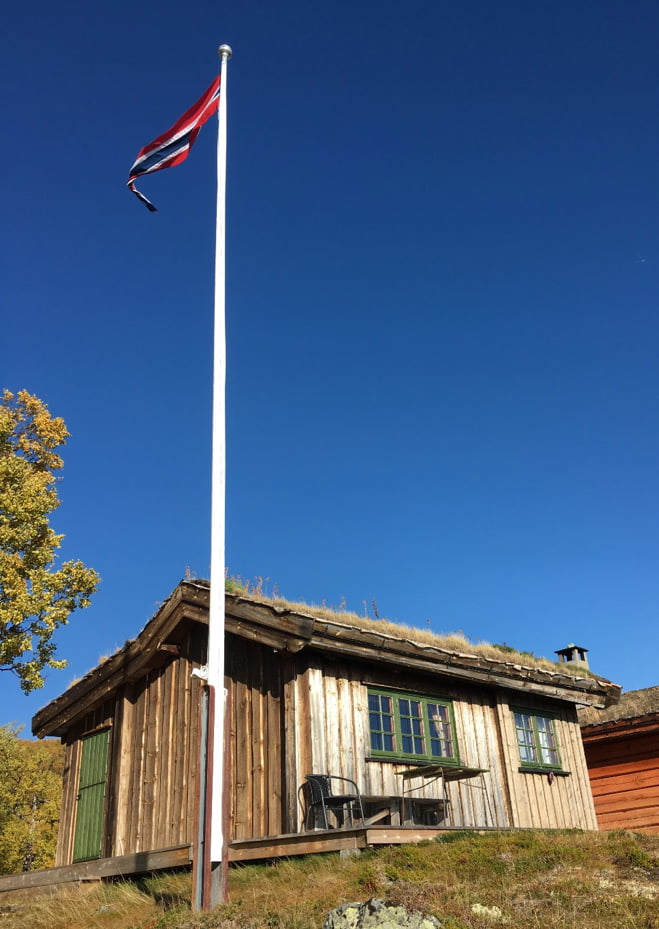 After we set our belongings in their place, we got dressed, and headed out to set the fishing nets. Day 1. I wore long johns, snow pants and a snow jacket. Being the end of September, it was cold out on the lake, so, it was necessary. Over top of the snow apparel we wore rain/fishing gear. Boy was I glad to have that on.

Out onto the water

We climbed into the traditional wooden boat. My girlfriend and her father estimated it to be about 60 years old. It was left in the water to keep the wood swollen as to not cause leaks.

Heading out, we took to our first spot they directed me to hold the net with the wooden pin and to setting the nets in the water. After 20 nets were set in 3 different strings along the lake, we headed in. Not too bad!

The next morning was overcast. We layered our fishing clothes back on and head out to see what we caught. The work to bring the nets back in was much more difficult because they were wet.

My girl brought the first net in to show me and when a fish appeared up to the surface, she handed the net and wooden pin to me. She untangled the fish from the net and gave it a good hit on the head. She tossed it in the bucket. Our first fish!

This process continued for about three hours. In total we caught 8-10 trout. There was one different fish from the trout called a sik. Her dad said someone introduced the fish to the lake years back, (“trash of the lake”) as he called it. A professional fisherman is hired to clean them up, but this takes a long time and it is difficult mitigating them completely.

After we brought in all 20 of the nets, we proceeded to set them out in different spots preparing for the next day. 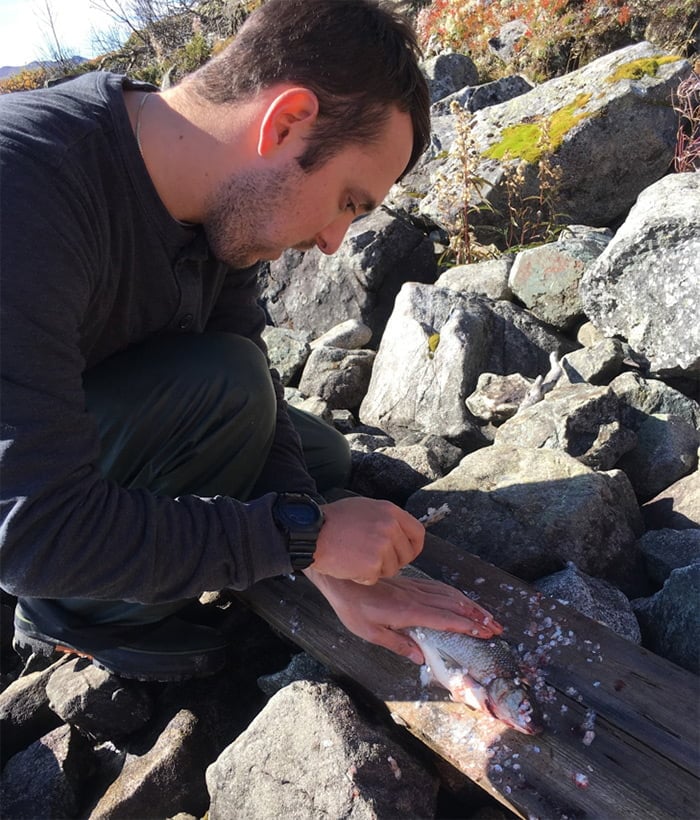 We took our catch back to the dock to clean them up and prepare them for Rakfisk. I have never in my life taken something from a lake an immediately ‘worked’ on it before. The point was to prepare the fish as soon as possible to keep it fresh.

My girlfriend told me to take a fish in my hand and create an incision from rear fins up the belly to gills. I still felt like the fish was alive and I was ending its life this way. Luckily it never flinched. Looking inside, there was a small belly, intestines and heart. Those would be removed and fed to the birds.

Some of the fish were pregnant and had an egg sac in their belly. We cut out the egg sack and placed it aside. This will be eaten for dinner that night. My girlfriend being daring ate a few eggs right out of the fish! My hands were covered in blood and cold; we knew we were not done with the preparation.

When all fish had been cleaned, we took some coarse salt and sprinkled it into the belly of the fish to help preserve it. The goal was to add enough salt to slow the decay of the fish but not so much as to not allow the fish to ferment. 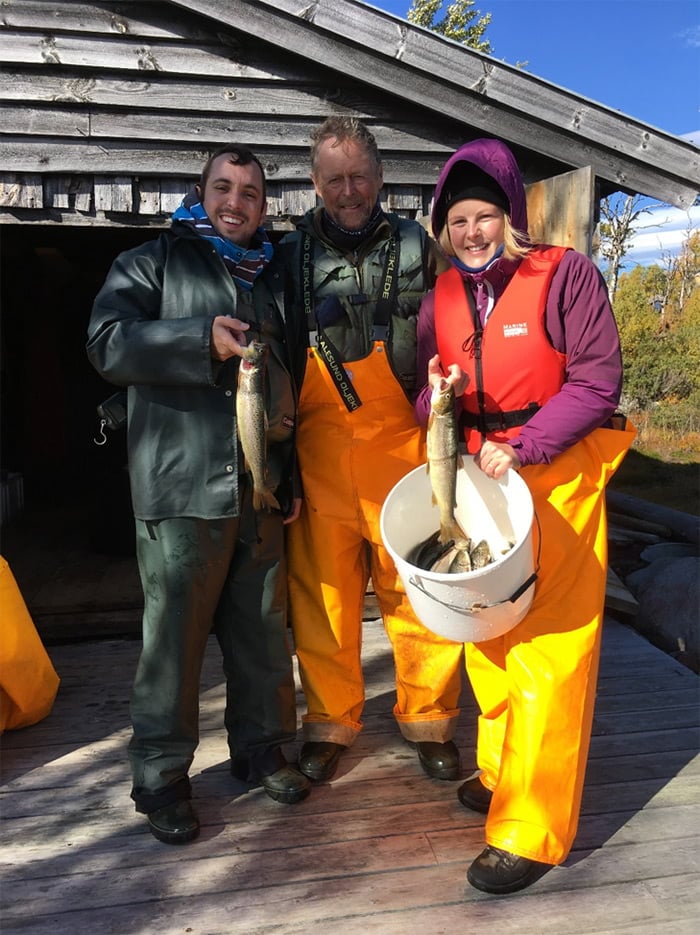 We stacked the salted fish about 4 or 5 in a bucket and sprinkled some more salt on top (seasoning…jk). After we filled the buckets with clean, salted water and sealed them shut. This is the final resting place for the trout. It will be opened and eaten throughout the coming year.

Finally, it's ready to eat

Come Christmas time we opened the bucket and cut the fillets off the fish. Now fermented you can eat the fish with lefse, butter, some green onions and of course aquavit on the side.

The experience gave me a complete view of how this traditional Norwegian food is fished and prepared. It was a great lesson for me of what traditional food is in Norway and why it is still important.

This is a food Norwegians could keep and eat throughout the winter. The real MVP is the fish and of course a lot of salt. It showed me that using the resources available can make some pretty great food. Overall, I can’t wait to put that fishing gear back on and do the same thing next fall!

A graduate from the University of New Haven in the USA, Derek moved to Norway in September 2018 and is job seeking in the areas of HR and Organizational Training.

1 thought on “My First Rakfisk Experience”