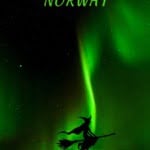 Finn-Kirsten Iversdatter was the last person to be executed for witchcraft in Central Norway, but her story was mostly forgotten. Until now.

When thinking of witch trials in Norwegian history, the case of Lisbeth Pedersdatter Nypan and her husband Ole often springs to mind. The case was brought to international attention with the publication of Rossell Hope Robbins’ Encyclopedia of Witchcraft and Demonology (1959).

A threat of magic

The story of the wise woman Lisbeth and the drunkard Ole, who threatened his enemies with his wife’s magical powers until the law caught up with them, is dramatic (as witch trials always are), but was not unusual compared to other cases in the country.

The ageing couple, who owned a farm at Leinstrand in the modern day municipality of Trondheim, had their estate confiscated and were both executed in September 1670. Then the case was closed.

However, the memory of Lisbeth Nypan has survived in the public imagination, and she is something of a Norwegian ‘national witch’, surrounded by numerous myths and stories.

In recent years fictional tales, local historical and genealogical books, yearbooks, and encyclopaedia articles have told her story; in 2005, she was even memorialised with her own statue in front of Nypvang primary school in Trondheim.

In my ongoing studies of witch trials in Central Norway, I have come across numerous cases that go far beyond the Nypan trial, in terms of their content, shape, and form. The comprehensive prosecution I will detail here is the trial against a Sami woman known as Finn-Kirsten Iversdatter.

The case has been almost completely absent from Norwegian history, despite the fact that it caused an uproar at the time. It was the talk of the town in Trondheim, between the remote villages from the south to the north of Trøndelag, and even all the way to Nordland.

The story itself, and the characters that emerge from the court records, could easily be from the pages of a fantastic and macabre novel. The trial against Finn-Kirsten started in the isolated mountain village Støren in 1674, and rumbled on until 1677.

After that, it disappeared into the darkness of history. Finn-Kirsten Iversdatter was the last person to be executed for witchcraft in Central Norway, with over thirty people from all levels of society at risk of the same fate throughout the trial.

The primary sources for this witch trial are mainly Trondheim Court of Appeal records 1671–76. Additionally, there are relevant judicial records from the Overhoff court (the Norwegian supreme court) and the King’s court (the common Norwegian-Danish supreme court).

Various lower local court records from pre-1675 are unfortunately lost, but there is also much relevant material in the county financial statements from the same period.

On trial in Trøndelag

In the mountain village of Støren in the south of Trøndelag county, a poor Sami woman was put before the local court in 1674. She was due to be interrogated by the local bailiff Jens Randulf on charges of harming people and animals in Gauldalen, striking them down with illness and misfortune using malicious witchcraft.

The court was crowded; all the farmers wanted to see and hear her explanation. The vagrant woman had roamed the villages, irritating the locals with begging, and threatening them in order to get food.

When denied, she mumbled dangerous curses, vowing that the farmers would no longer enjoy their prosperity. Afterwards, horses would fall dead, cows would not give milk, and inexplicable diseases would afflict the farming families.

The repulsive woman had drifted down into the village communities from the savage mountain, where the southern Sami people roamed. The woman was of the Sami people and her name was Kirsten Iversdatter, but she was more commonly known as ‘Finn-Kirsten’.

The farmers had for several years bumped into her in their villages, but no sooner was she standing in one of their doorways, than she would suddenly disappear. No one knew where she came from or where she went.

A common view of Sami people at the time

The woman frightened the farmers, because everyone knew the Sami people were in contact with wild chaotic forces, demonic energies neither priest nor Our Lord himself could tame.

The Sami were infamous for being great witch masters. They could summon the spirits of their ancestors and gods of nature with their magical drums (the so-called ‘rune-drum’), enabling them to both see the future and divine news from distant places. Their percussive magic could find lost items and influence fortunes in life and business.

Historical sources tell us that Norwegian farmers would pay the Sami for such magical services, but that one should be wary of their company. If one incurred the wrath of a Sami, so the Norwegians believed, the Sami could release a gand, an evil spirit and/or a physical object, which had the power to strike a man dead, even to split mountains.

On 18 February 1674, the bailiff’s assistants, the peasant sheriffs in Støren, arrested Finn-Kirsten. She was placed under lock and key to await trial, during which she vehemently denied performing any evil witchcraft. However, the chaplain of Støren, Peder Schjelderup, and the local villagers could all testify that the frightening vagrant had not sought the church on a regular basis, as all subjects of the kingdom were obligated to do.

Moreover, Finn-Kirsten would roam with two daughters, one twenty years old and the other just two, and neither could be shown to have been born in wedlock as required by law.

Even with a confession to witchcraft – often crucial for securing a guilty verdict ­– missing, one could at least determine that the children had been ‘bred in sin’. Finn-Kirsten was convicted for her sacral sins and for fornication, and was sentenced to die ‘from her neck’, i.e. to beheading.

After the judgement, she was placed in the custody of the local bailiff Jens Randulf, a man with experience in both accusing witches and in getting such ‘devil disciples’ to talk. After some time as his prisoner, she finally confessed ‘to have given herself to the Devil’. She identified herself as an apprentice of Satan, and claimed that he used to come to her in the shape of a dog.

Met the devil in the mountains

She said that she and others had met the Devil in the mountains encircling Støren on regular basis. Finn-Kirsten’s case now changed from being a church disciplinary matter to a full-blown witch trial.

The new confession would be punishable under the Danish-Norwegian criminal code for ‘real witches’, a law that demanded death by burning for anyone ‘in league with the Devil’.

After this new confession, the case was transferred to Trondheim Court of Appeal. Finn-Kirsten was detained in ‘Kongsgården’ (the King’s royal palace) in Trondheim city – today known as the Archbishop’s Palace – under the custody of the county governor Joachim Vind.

After torture and interrogation by Vind and the public officers of Støren, she named more than thirty people as accomplices, ranging from both wealthy and poor in Trondheim to prominent farmers in the valley of Gauldalen.

Amongst other things, Finn-Kirsten ‘confessed’ that the son of Inger Rognessen had visited Hell three times; she claimed that another woman called Inger (who lived by the city bridge) had levitated through air with her, and that she knew both white magic and sorcery.

Finn-Kirsten also claimed that Inger was eager to become an apprentice of the Devil, but that she refused her the same ‘honour’ as she had only served Satan for two years. Guri, a carpenter’s wife, was alleged to have been ridden into the mountains to meet the devil twice, but Finn-Kirsten could not say if Guri was the rider or if someone rode her!

Sentencing and the subsequent witch-hunt

This was the end for Finn-Kirsten. Her punishment was increased from beheading to death by burning, as the statutes against witchcraft allowed; she was executed outside the city gates 12 October 1674, with a huge crowd present.

Even after her death, the accusations against her alleged ‘accomplices’ in witchcraft demanded investigation, tying up the judicial system in Trøndelag for years to come. The witch trial was the talk of the town, both in the city and the surrounding villages. Gossip was everywhere, and the scene was set for an intense witch hunt in southern Trøndelag.

The aftermath of the case lasted until 1677, and many people were at times in danger of suffering the same fate as Finn-Kirsten. However, she was the last woman burned as a witch in Central Norway.

The circumstances of this trial and those that followed in its wake are told in my 2014 book The Last Burning of a Witch in Trondheim: The Witch-Trial Against Finn-Kirsten. The book is in Norwegian and is based on the original documents.

This article was first published by our friends at Gemini Research News, and has been republished here with permission.