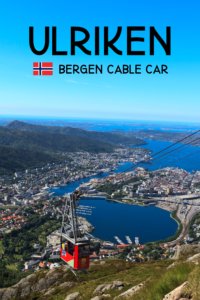 Ready for an unforgettable view of Bergen? Here's everything you need to know about the Ulriken cable car.

Among other nicknames, Bergen is known as the city of the seven mountains. Hiking these peaks is a popular activity with locals while visiting them gives tourists a fantastic perspective on the city and its surroundings.

Bergen's Fløibanen funicular railway is well-known and much-loved by tourists. But it's the Ulriken cable car that provides an even more spectacular view of Norway's second biggest city.

Perhaps one of the reason the cable car is less-known than the funicular is its location. The lower station is away from the city centre and required a bus trip. But the recent opening of Bergen's second light rail line has made it easier to access than ever before.

If you're visiting Bergen on a cruise ship, I understand you have limited time and so Fløibanen is a sensible option. But if you're visiting for a day or more, I'd urge you to consider a trip to Ulriken instead.

Ulriken stands taller than any of the other mountains in the immediate surroundings of Bergen. At a height of 643 metres (2,110 ft) above sea level, the view from the summit is absolutely wonderful–on a clear day, of course!

The mountain is so dominant in the city that the Bergen line railway runs right through it in a lengthy tunnel. On rainy days, the summit is often obscured by clouds.

The cable car means that Ulriken is a popular destination for hiking in Bergen, although you don't need to take it to enjoy the trails. More on that later.

Ulriksbanen, branded as Ulriken643, is an aerial tramway from city level up to the summit of Ulriken.

By the way, I use “cable car” as it's the most commonly used term in British English, but aerial tramway is another correct term and you might prefer that! Just bear in mind that most Bergen people will use the term “cable car” when speaking English.

Soaring to the summit in just seven minutes, the cable car takes you twice as high as the Fløibanen funicular.

Whereas Fløibanen is great for a lofty view of downtown, the views from Mount Ulriken set the city in context with its stunning natural surroundings.

The individual carriages are brand new following a recent renovation of the entire system. Tickets are not cheap at NOK 345 for a return trip, but there are departures every five minutes. Still, you should be prepared to wait at busy times.

At the summit, you'll find a drop-in cafe with a traditional Norwegian menu, snacks, drinks, ice-creams and what the cafe claims is a “renowned” Ulriken bun.

If you prefer to try the seasonal menu in the formal restaurant, you'll need to make advance reservations. Both the cafe and restaurant are closed on Mondays.

How to get to the Bergen cable car

First things first, don't set your plans in stone. Ignore the pushy sales tactics from the downtown street vendors and don’t book your trip in advance.

Instead, wait until the morning of your planned visit and make a visual check of the weather. If it’s cloudy on the mountains to the southeast of the city or if there are high winds, don’t make the journey. You won't see anything from the summit!

Those same vendors will try to sell you the trip on a brightly-coloured historic double-decker bus. While you might want to pay the NOK 100 for convenience, you can also get there relatively easily under your own steam.

To make your own way there, take the bus or light rail to Haukeland sjukehus (Haukeland Hospital). If you are taking the light rail, be sure you are on the new line 2 and not line 1 which goes to the airport. From the hospital stops, it's a relatively short walk to the Ulriken 643 station.

To really get an understanding of the Norwegian outdoors lifestyle, you should hit the hiking trails. Ulriken is a favourite spot for many.

Feeling active? Join some locals and walk up Ulriken instead! The trail begins at the lower cable car station.

After a turn, the sherpa steps appear. 1,400 steps later, you're at the summit. You should allow 60-90 minutes to complete the journey. Of course, you could choose to take the cable car up and walk back down instead!

The hike from Fløyen to Ulriken is a classic Bergen hike, albeit a challenging one.

Allow up to 6 hours to complete the 18km hike, bearing in mind you will cover a lot of open, high mountain terrain. You can take the Fløibanen funicular and cable car at either end of the hike.

Local guides advertise “panorama hikes” from Ulriken. These can be booked with the cable car company.

Have you ever been to Ulriken? Let us know what you thought of the experience in the comments below.