Word order is a tricky thing to get to grips with when learning any language. Norwegian has a particular quirk shared with many Germanic languages. Here's what you need to know about the V2 rule.

The Norwegian language has some peculiarities, and the V2 rule is one of them. As the Norwegians themselves say, it’s all about ordstilling (word order).

So, whether you’re in the process of learning Norwegian or just want to hear about one of that language's many quirks, join us as we dive into the strange and wonderful world of Norwegian grammar.

The V2 rule is not unique to Norwegian. In fact, it applies in almost all the Germanic languages. You'll find it in Swedish, Danish, Icelandic, Faroese, German (obviously) and Dutch.

Weirdly—but not unexpectedly, since we're writing this article—it doesn't exist in English.

Why V2 is important

Respecting the V2 rule is important because it's one of those things that comes naturally to native speakers. Not respecting the rule immediately identifies you as a foreigner.

If you're learning Norwegian, and if it's your first time learning a foreign language, you may easily fall into a common language learner's trap.

This trap is to question the logic of the language you're learning. Some may even refuse certain “illogical” rules and persist in not learning them.

Questioning the logic of a language is tempting. After all, if you translate Norwegian sentences literally, they do sound a bit silly in English. Why are the rules what they are? Who decided this? Why doesn't it make any sense?

If you think about it, English doesn't make much sense either. Through, though and thought don't rhyme, despite being almost the same word (at least in the way they are written).

Questioning the logic of a language you are learning is about as productive as questioning the order of the alphabet. You just have to accept that the language exists as it is, that it's not always based on pure logic, and move on. Not doing so will greatly impede your progress.

The V2 rule dictates that the verb must come in the second grammatical place in the sentence. This is applied pretty much always, although as with all language rules there are exceptions.

The rule is best explained with examples.

Let's say that you want to tell your friend that you made dinner. In English, you'll say: I made dinner. The sentence is structured in a very familiar subject (I), verb (made) object (dinner) order.

In Norwegian, the sentence follows the same subject-verb-object structure: “Jeg laget middag” (where jeg means “I”, laget means “made” and middag means “dinner”.

So far so good, right? The verb takes second place. Complicate the sentence a bit more, though, and that's when things start getting weird.

Where V2 comes into play

Suppose you want to specify that you made dinner yesterday. In English, you will say: Yesterday, I made dinner. The V2 rule prohibits you from following the same word order in Norwegian.

The correct way to compose that sentence in Norwegian is “I går laget jeg middag”. Literally, that translates as “Yesterday made I dinner”.

You'll see that the subject and verb are reversed, to ensure the verb takes the second position in the sentence. Note that this isn't always the same thing as the second word. In this case, “i går” means “yesterday” and takes the first grammatical place as an adverb. “laget” takes position two as the verb, meaning the subject “jeg” must come third.

If you say the sentence in Norwegian with the normal English word order “I går jeg laget middag”, people will immediately know that you're not Norwegian.

What if you want to have “yesterday” at the end of the sentence, I hear you ask. Is that allowed? It is! But the V2 rule still must be respected.

“I made dinner yesterday” becomes “Jeg laget middag i går”. Did you notice anything? The word order is the same as in English. Because the verb comes second, V2 is respected and the sentence sounds more “normal” to an English speaker's ears.

But what about questions?

One of the confusing aspects of the V2 rule for native English speakers is that it makes sentences sound a bit like questions. How can you tell then if a sentence is a question?

Here's an example of this ambiguity:

Yesterday, you were tired: I går var du trøtt. The word order in Norwegian is “Yesterday were you tired”. It does sound exactly like a question. And confusingly, “Var du trøtt?” is exactly how you would ask a Norwegian if they were tired.

How can you tell if it's a declaration or a question? There are two ways: first, if Norwegians put the “yesterday” at the end and say “Var du trøtt i går?” there is no ambiguity. It's definitely a question. More often than not, that's how they'll phrase the question.

The difficulty of explaining your own language

Another thing that makes the V2 rule difficult is that it's really not easy to explain, for a Norwegian. Think about it: when you grow up with a certain grammatical structure, it just feels normal and natural, and you don't question why things are the way they are.

So, while a Norwegian may correct you if you make a V2 mistake, they may not be able to explain to you why what you said was wrong. It's entirely possible that they've never heard about the V2 rule. They simply follow it intuitively.

If that's difficult to understand, flip the situation the other way around. How would you explain to a Norwegian that it is incorrect to say “Yesterday made I dinner”?

Are you learning Norwegian? Do you struggle with the V2 rule? Are there any other peculiarities of the Norwegian language that make your life difficult? Tell us in the comments! 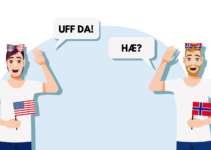 4 thoughts on “The V2 Rule: Word Order in Norwegian”