The temperature in Vardø, Norway’s easternmost town, is rising. This means mainland Norway will soon have no towns remaining with an official polar climate.

Svalbard has hit the headlines in recent years as one of the places in the world with the most visible impact of climate change. Yet the effects are being felt down on the mainland too.

Vardø is Norway’s easternmost town, farther east than Saint Petersburg, Kiev, and Istanbul. It’s home to less than 2,000 people, who mainly rely on fishing-related industries for their living.

The town is best known for its 17th-century witch trials and Vardøhus Fortress, but there’s an interesting climatic quirk too.

It has a tundra climate and even in the warmest month of the year the average temperature is less than 10C. That makes Vardø Norway’s only town with an arctic climate, although that classification is at risk due to global warming.

Vardø is warming up

On average, the number of days with an above average temperature in Vardø has increased from 32 to 59 in the last 150 years.

The average temperature has risen by one degree since the 1970s, but one researcher predicts a rise of up to a further three degrees by 2050.

While that may not sound like much, experts say that’s more than enough to influence climate systems. The issue is about far more than numbers, however. Vardø itself is changing.

The new gardens of Vardø

One local told NRK that she notices the changes in her garden. For one thing, there never used to be many gardens in the town. Now, there are.

She first used plants and flowers that blossomed early in her home county Troms. They would flourish in the middle of the summer in Vardø, but now there is no difference. “What I previously thought would not bloom here because it was too short a season is actually flourishing now,” she said.

Hans Olav Hygen from the Norwegian Meteorological Institute told NRK of his concerns. The institute exists to help protect life and property by providing weather forecasts and warnings for private individuals, emergency planning authorities and government agencies, among other things. 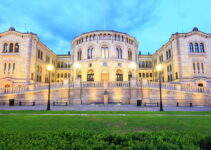