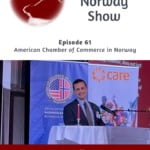 Life in Norway Show Episode 61: Jason Turflinger of the American Chamber of Commerce in Norway joins the show to talk business culture in Norway and the US.

Today I’m joined by Jason Turflinger, Managing Director of the American Chamber of Commerce (AmCham) in Norway. Jason has lived in Norway for more than 20 years and has a huge amount of insight into the business world.

We talk about the purpose and work of the AmCham organisation, and whether the stereotypes are true about the difference in working culture between Norway and the United States.

Jason also offers up some tips for Americans looking to move to Norway and find work. Happy listening!

Jason moved to Norway more than 20 years ago almost by accident, following his studies that would have taken him to Moscow. Economic trouble in Russia meant he instead settled in Norway following a visit to a former college roommate.

Today, Jason works as Managing Director of AmCham in Norway. The Oslo-based AmCham is a non-profit business advocacy, services and networking organisation comprised of leading US, Norwegian, and international member companies operating across 22 industries.

Jason explained the difference between AmCham and a more typical Chamber of Commerce in a city:

“Most of our members if not all have already decided to do business in Norway. We are trying to facilitate business for them and make things easier, and hopefully make it easier to attract additional investment into their Norway operations.”

Business culture in Norway and the US

We chatted a little about the stereotypes of business culture in Norway and the US, and whether those stereotypes are grounded in reality or not.

“When an expat director arrives, I can tell you early on if they're going to have a hard time here or a good run during the leadership of their organisation. A lot of that comes down to whether they are vocal in their opposition to what they perceive their employees' work ethics to be.”

However, Jason believes that while Norwegians do tend to leave work earlier, they don't necessarily do less work: “It seems that Sunday evening is the new Monday morning.”