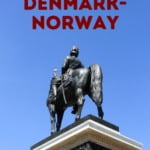 Norway and Denmark share a long history but the historical facts are not known by many. Here you get the history behind the union Denmark-Norway.

Scandinavian history is a long and complex one. For example, Norway was a part of Denmark for hundreds of years.

The separation was the biggest loss of territory in the history of Denmark. Even so, the historical event has a surprisingly small awareness in the mind of a modern Dane.

Denmark's role in the history of Norway

According to the Danish historian Rasmus Glenthøj, Denmark plays a major role in the history of Norway. Norwegians with big festivities celebrate Constitution Day on the 17th May marking the end of Norway-Denmark and the birth of Norway as an independent state.

The loss of Norway in 1814 was not the only headache for the Danish kingdom as Denmark lost Schleswig-Holstein in 1864. This national trauma is well processed in Danish history, literature, politics and arts.

The separation with Norway perhaps got less attention both due the lack of professional history writing at that time and because the loss was very embarrassing for the Danish King Frederik VI. As with a bad break up he did his very best to forget all about Norway.

“He introduced censorship, banned Norwegian newspapers and got the officials to publish pamphlets wording the separation was a blessing for Denmark because Norway was an economic burden. But that was a lie,” said Rasmus Glenthøj to the Danish science website Videnskab.dk in 2012.

Norway has perhaps been trivialized in Danish history, but both the union and separation have in many ways shaped the two countries. Here is what happened and what let to the end of Denmark-Norway also known by the name “Twin Kingdoms”.

Good or bad times for Norway?

The period between 1380 and 1814 is popularly referred to as “the Danish time” in Norway as Denmark was more or less the leading kingdom in the north and eventually also the governing state of Norway.

Some historians describe this period as bad for Norway because of the loss of political governance and national identity.

Other historians emphasize that although Norway lost its own political governing, the population grew and the economy improved under the Danish period.

The Kalmar Union of Scandinavia

In the beginning the union was actually a united Scandinavia. For over 100 years, the countries of Norway, Denmark and Sweden – which at the time also included much of modern Finland – were united under a single crown known as the Kalmar Union.

The three kingdoms had formal status as independent kingdoms under a common king. Even though the countries in formalities were on equal footing, Norway was becoming a little brother in the union during the 1400. During the middle ages Denmark was the strongest political and economic power in the North.

The Kalmar Union stood from 1397 until 1523. A bloody massacre – known as the Stockholm massacre –  began only four days after King Christian II of Denmark and Norway was crowned as king of Sweden 4th of November 1520.

During two days 100 opponents were executed by the new king and his followers. This was an attempt to silence the new King's opponents and strengthen The Kalmar Union. It didn't go as planned. Actually it ended as a big backlash for Christian II.

The Swedish nobleman Gustav Eriksson (Vasa) led a new uprising and swept the new king Christian II out of Sweden in 1523. Sweden declared its independence and elected Gustav Vasa as its monarch. The end of Kalmar Union.

In 1536, King Christian III of Denmark and Norway and the Danish royalties decided that Norway should be ruled under Denmark's crown and therefore couldn't be called a kingdom of its own.

Norway had since 1380 shared the king with Denmark but had its own governing institution in the shape of a state council. The members of the council were chosen by the king. Not all members were fond of the idea of a total loss of sovereignty to the Danish kingdom.

The chairman of the council and archbishop Olav Engelbrektsson was a strong opponent of Christian III. At this time the archbishop was Norway's most powerful man. He was fighting for Norwegian independence and a Crown under the Catholic church.

King Christian III was influenced by Luther’s idea and already the year after he forced the Reformation by military power when he decided to abolish the Catholic Church.

Olav Engelbrektsson tried to prevent this but didn't succeed and he had to flee Norway. Catholic Church property and the personal property of Catholic priests were confiscated by the Crown during the Reformation. The decline of Norway was indicated by the abolition of the Norwegian state council.

Why did Norway become a part of Denmark?

Many have questioned why Norway gave up its sovereignty with the end of the Kalmar Union. One idea proposed is the impact of the plague. After the plague, there was no longer an elite in the country that could maintain the Norwegian state, according to some historians.

After the epidemic, the population in Norway was approximately 150,000 people and this was probably halvation from before the Black Death arrived.

However, no research suggests that Norway should have been more hit by the plague than other countries. According to some historians the Black Death can therefore not explain why Norway became a province under the Kingdom of Denmark.

Another reason why Norway, in contrast to Sweden, became subordinate to Denmark, may have been the link between the Norwegian council state and Catholicism, others suggest. When the Catholic uprising failed against the Reformation and the Danish Crown it led to the loss of sovereignty.

So it’s not really clear why Norway lost its independence. Nevertheless, the time during 1537–1660 did not mean a complete incorporation of Norway under Denmark, but the previously relatively free position in the union was severely limited.

Norway's time under the Danish kingdom

The Danish language had over time became the language of the elite, the church, literature, and the law in Norway. For more than three hundred years the written language was Danish in Norway. People still talked in dialects but wrote Danish.

It was not only the Danish language that influenced Norway. Much art, literature, theater and music came from Denmark or via Denmark.

Higher taxes and the end of Norway-Denmark

Over time, Norway eventually grew in wealth and strength to become a more equal partner in the union with Denmark. The feudal, agrarian economy of Denmark and the ‘modern’ industrial economy of Norway complemented each other well. Trade within the twin kingdoms was high and each was pulling its own weight.

Standing on the losing part in the war eventually the armies turned their attention to Denmark, and it didn’t take much persuasion to get King Frederick to hand over Norway to Sweden.

On January 18th, King Frederick VI of Denmark issued a letter to Norwegians releasing them from his rule. In 1814 Denmark-Norway was officially over.

Before 1814, there was a fluid transition between Norwegian and Danish. It was not unlikely that a Norwegian could see themselves as a Danish citizen. But after the separation many Norwegians had a desire to get rid of Danish things. Denmark was no longer looked on as an ideal but more as a suppressor.

The nationalistic movements in Europe gave rise to this powerful desire for self-determination. One thing was to create a separate Norwegian language. The cultural struggle between Danish and Norwegian is also the reason why Norway today has two official written languages.

As for Denmark, the separation was a step on the way towards democracy and self-perception as a small state.

Today both countries have a close relationship. We have our differences but Danes would say that Norwegians are the people we are the most alike.

Michelle lived and worked as a journalist in Denmark before she moved to Norway for the adventure and mountains areas. She now lives in Oslo and works as a freelance journalist and translator.