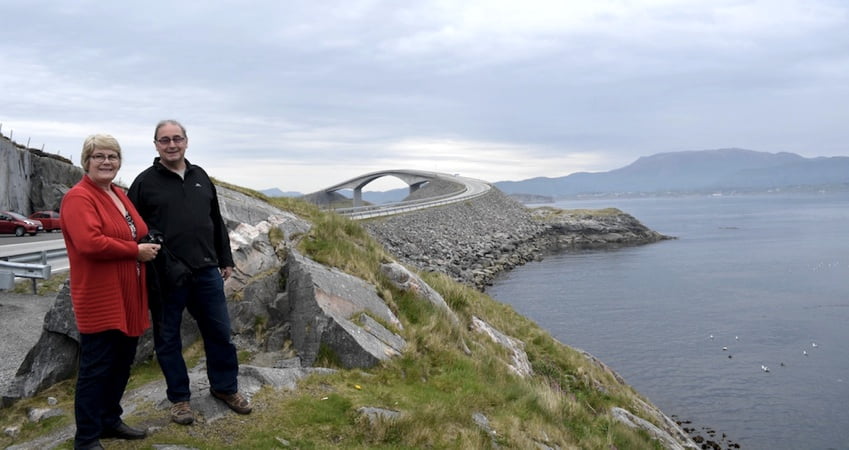 Uh, it's been almost three weeks since my last post, how did that happen? Sorry everyone!

One of the reasons is I've been playing host to my parents the past 10 days. Last week we took a trip to the coast, reminiscent of my Norwegian road trip with Gerry and Chris last year. One of the lessons I learned on that trip was not to try and do too much.

Distances in Norway are further than they appear on a map: getting stuck behind trucks on mountain roads, just missing a ferry and having to wait half an hour (or more!) for the next one, skirting around entire fjords, and stopping for much-needed breaks, are all contributing factors. Plus, coastal Sør-Trøndelag and Fjord Norway are too beautiful to rush!

This time, I'd planned a trip to the Atlantic Road for my Dad and a night in a waterside cottage on Averøy for my Mum.

Having been to the Atlantic Road before I wasn't expecting much from my point of view, but that's before we accidentally stumbled into a major Norwegian TV production!

Last time I was here, the weather was terrific. This time it was cloudier, raining, and the atmosphere was far more moody (although still a long way from the famous stormy Atlantic Road videos!)

As we explored the area, we came across a whole bunch of classic cars readying themselves for a parade. Needless to say, my car-loving Dad was in his element! 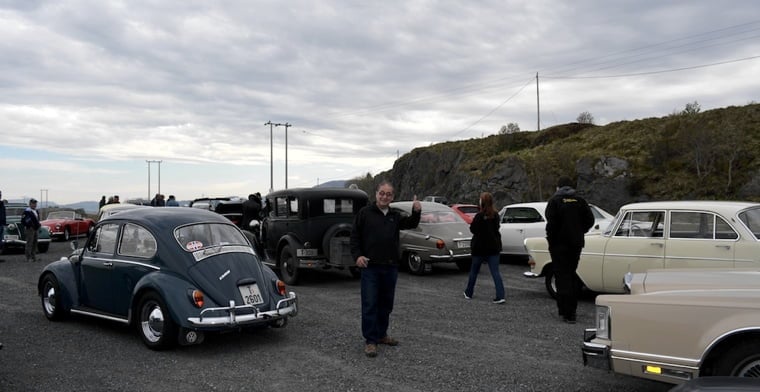 We jumped in our car and found a great spot at one of the Atlantic Road's many lay-bys for a prime view of the rally.

All of a sudden, a helicopter came into view, seeming to follow the cars and swoop down towards the famous bridges where a few Norwegians were dressed up in formal dress and waving flags: at the time I just thought this was for an engagement photo 🙂

It was only on reaching charming Ålesund that we realised what it was all for, thanks to Elise for helping piece together the puzzle! 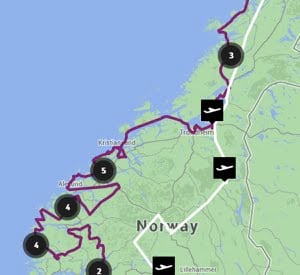 Fly Med Oss (Fly With Us) appears to be TV2's attempt to rival NRK's Slow TV but in a bite-size format. Fast Slow TV, if you like! The premise of the show is simple – a TV2 helicopter flies over towns and famous landmarks in Norway recording a film. That's it!

The route and timings are announced online and fame-seeking locals put themselves in prime place to be recorded. Some are more extreme than others, climbing some of Norway's most challenging peaks and waving a Norwegian flag.

One stunt even showed a mountain climber stood atop a precarious looking rock before being picked up by the helicopter!

Most of the landmarks get featured for just a few seconds, but TV2 chose to feature Atlanterhavsveien for over five minutes, and although you wouldn't know it was us, we can be seen standing in the lay-by, my Dad watching the cars and me taking photos of the helicopter. These photos!

For those of you in Norway, the show is still running every evening on TV2 and is well worth checking out. Click “Klipp” on the website to watch some of the highlights. Here's the coverage of the Atlantic Road (video quality isn't great)