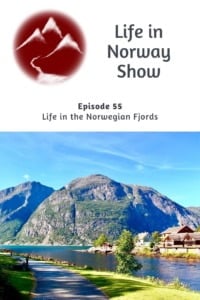 Life in Norway Show Episode 55: An introduction to Norway's fjord region with Victoria from the Norwegian Nature Centre Hardanger in Eidfjord.

The Norwegian fjords are Norway's number one tourist attraction, and with good reason. Some of them are even recognised by UNESCO for their unique natural and cultural value.

Today I'm sharing a conversation from my recent visit to the Norwegian Nature Centre Hardanger in Eidfjord. It serves as a visitor centre for Hardangervidda National Park, and is a popular stop for anyone visiting the Hardangerfjord region.

Today's guest Victoria is the front desk manager of the nature centre. Originally from Berlin, Germany, Victoria was drawn to the Norwegian fjords from an early age and now calls the area her home.

Introducing Eidfjord and the Hardangerfjord

Eidfjord is part of the Hardanger region along the Hardangerfjord. “It's called Norway's fruit basket because we grow most of the the fruit here, especially apples, but also cherries and pears. In recent years, cider has become a very big thing,” said Victoria.

“Eidfjord is all the way at the end of the Hardangerfjord. It's a tiny community, with only 900 people living here throughout the year. You wouldn't maybe expect it but there is a really nice, socially active community here.”

The Norwegian Nature Centre Hardanger has been opened since 1995. It was opened by Queen Sonja who loves to hike in the area.

At first the focus was mainly on the Hardangervidda mountain plateau as it was one of two visitor centres for the National Park. “But in 2018, we changed the name and the content of the exhibitions and broadened the focus to Norwegian nature in general,” explained Victoria.

One of the things you'll learn at the visitor centre is how the fjords were shaped many thousands of years ago in the last Ice Age.

There are also several exhibitions about the diverse wildlife you'll see, down at fjord level and high up in the Norwegian mountains.

Victoria's love affair with Norway began on a family vacation as a 14-year-old. “I remember one evening sitting down by the fjord looking out over the water at the mountains and being totally fascinated.”

Victoria also talks about how best to see the fjord region. Sailing down them is one option to understand how different they are from rivers or lakes, but that’s not the only way.

The Eidfjord area offers plenty for tourists, from the Norwegian Nature Centre to the spectacular waterfalls of the area such as Vøringsfossen.

I hope you enjoy the show! If you did, why not share it on Pinterest so others can do it too? We have the perfect pin for that. Just hit those social sharing buttons.