Skip to content
Home » History Blog » Norway in 1900: Living by the Nordfjord 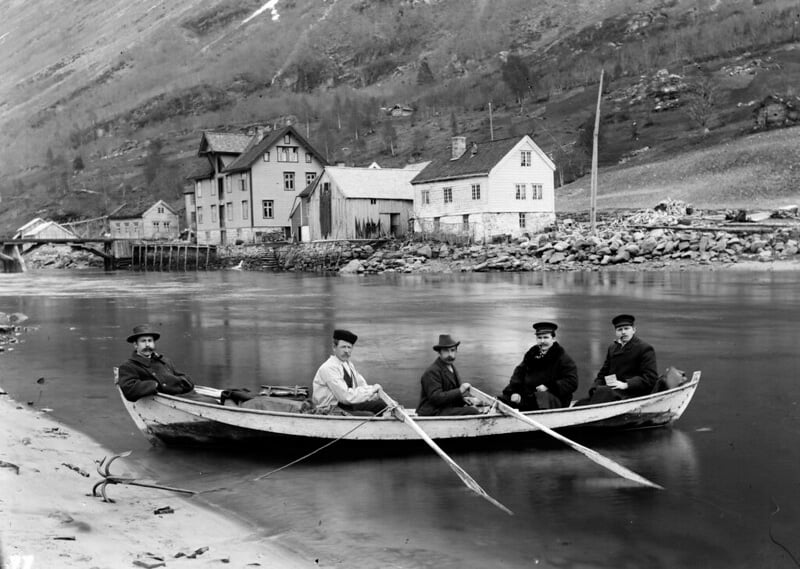 These old photos from around the year 1900 reveal what life used to be like living near one of Norway's most famous fjords.

Norway's Nordfjord is a popular tourism spot with locals and international visitors. Cruise ships visit the fjord throughout the summer. With the help of the county archives in Sogn og Fjordane, we present this outstanding collection of archive photography.

Jens Knudsen Maurseth was born in Hornindal in August 1863. After completing his training in photography in Bergen, he setup business in Nordfjordeid around the year 1885. Five years later, he moved his business to the tourist hotspot Stryn.

Maurseth worked for the tourist trade, taking photos of hotels, cruise ships and landscapes around the Nordfjord. A skilled photographer, he also took portraits and worked at weddings in the local area.

Maurseth died in 1927 and as he never married, his possessions were auctioned off. His large 18x24cm glass plate negatives went unsold and were stored in his house for many years.

Having almost been destroyed, the plates were recovered and donated to Stryn library in 1970. More than a thousand more smaller plates from Maurseth's portrait archive were also later recovered. In 1992, all the surviving negatives were moved into safe storage at the Sogn og Fjordane county archive.

Archive photos from the Nordfjord

Now thanks to the archive, we can bring you a selection of truly fascinating images. If you ever wondered what life was like in Norway several generations ago, these pictures will give you an idea.

Scenery wise, not much has changed! But the communities and boats give away the age. The image below dated to 1910 shows a view of Loen from the fjord. The ships visible include the SMY Hohenzollern, the warship Hamburg and the boat Raksjekta. 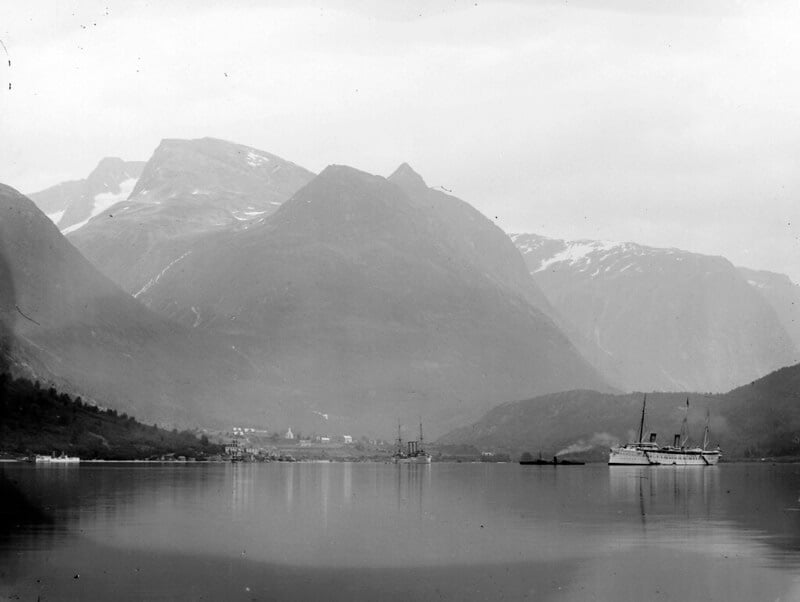 The next picture taken around ten years earlier shows the village of Olden. This was also taken from the Nordfjord. The large building at the centre is Yris Hotel, built in 1893. 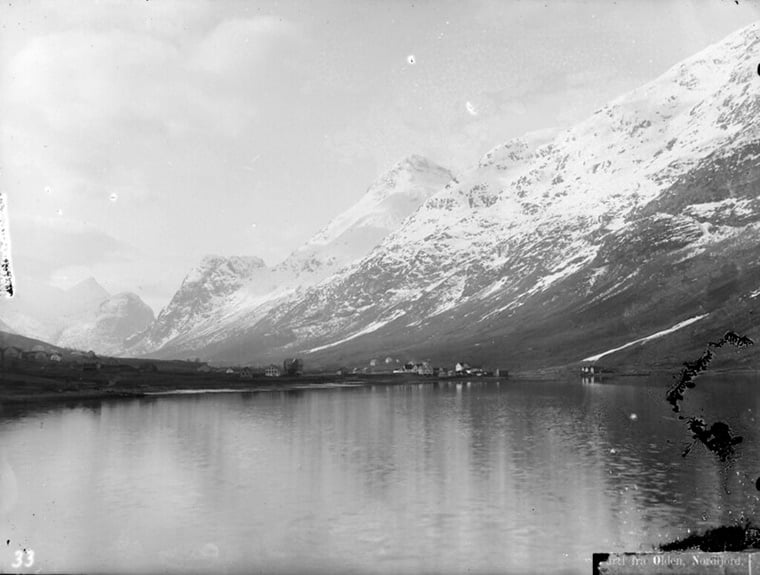 While the fjords themselves haven't changed much, the people have. Among the Maurseth archives were many slides and photographs featuring local people.

People of the Nordfjord

These give a glimpse into Norwegian family life, rural life, typical clothing (although people doubtless wore their best for the photographer) and hint at some of the occupations.

The first picture shows a group of seven people with the village of Loen providing the backdrop. It's not known who the group is although there does seem to be an air of familiarity amongst them. Note the three men are all positioned lying on their side while the four woman share a straighter pose. 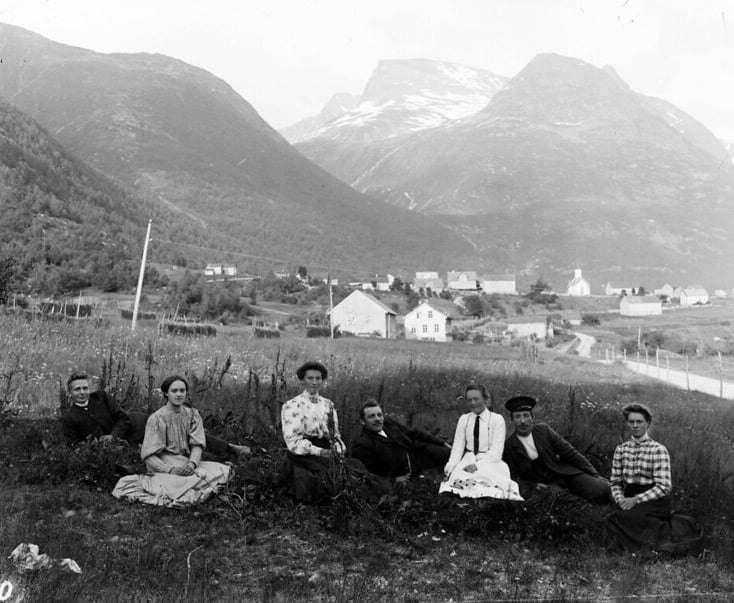 The picture below is a family portrait of the Meland family in front of their home. The family lived at Meland in Oppstryn and the photo was taken in 1910. How lovely is their house!? 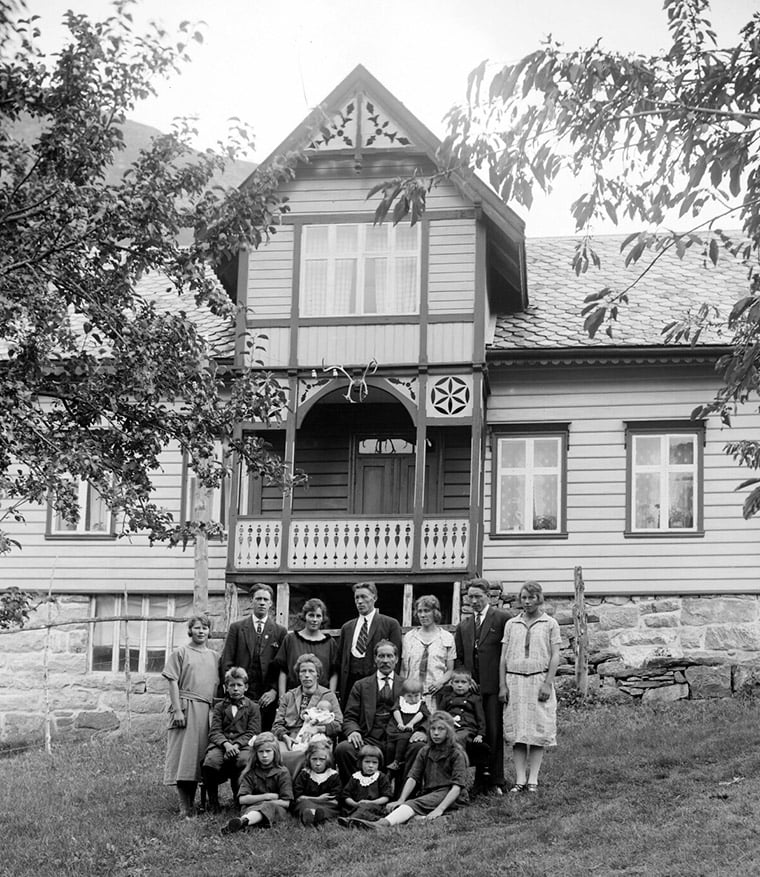 While Stryn itself was small, there were many other small settlements dotted around the fjords. Many of these no longer exist. The next picture shows a gathering in Stryn of local youth associations (ungdomslag) from across the region, dated to around 1910.

The banners are reminiscent of those carried by schools and associations in Norway's National Day celebrations to this day. 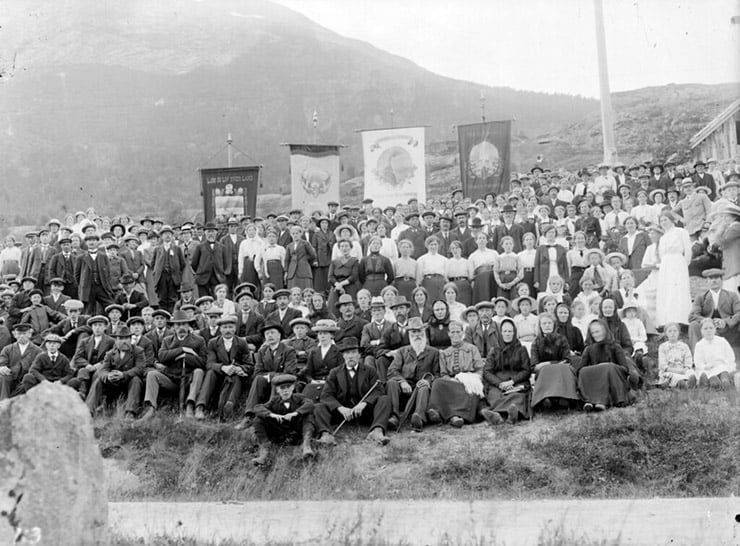 Another occasion that drew people out in great numbers was a Royal Visit in 1906. The next photo shows crowds in Olden waiting for the arrival of King Håkon and Queen Maud following their coronation in Trondheim. If you look closely there are a couple of umbrellas visible, and at least one other photographer hoping to capture the scene! 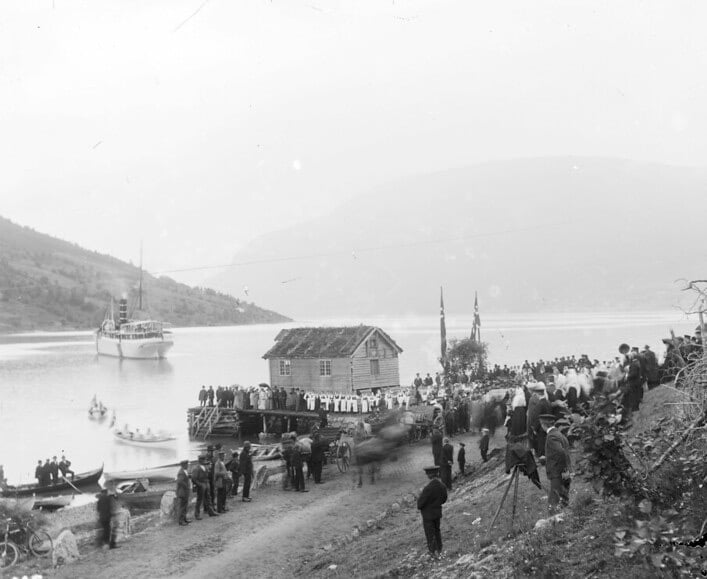 The next photo is a group shot of the Hjelledalen gymnastics troop. Not much else is known about the photo other than it was taken in 1910. Presumably given the pristine nature of the young men's uniforms, most of their activity took place indoors! 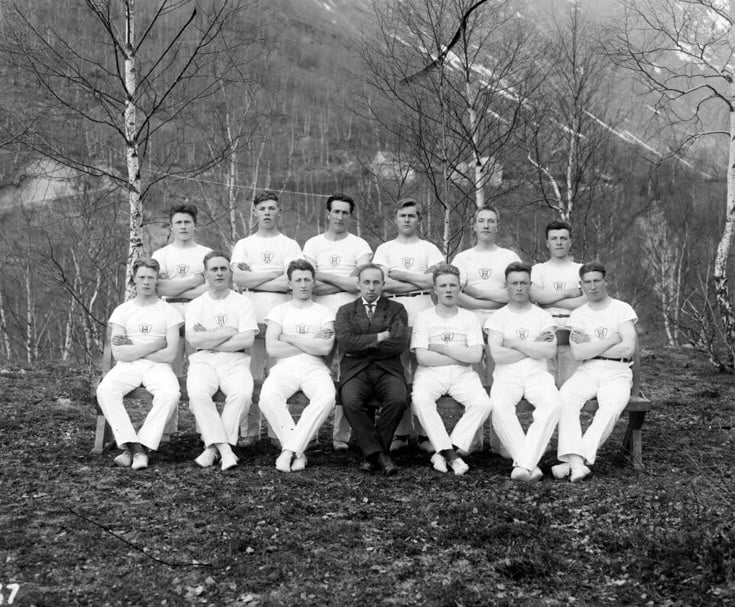 The final photo in this section depicts the bride, groom and wedding guests at a wedding reception. Unfortunately not much else is known about the photo such as the names of the happy couple nor the location. Still, it's fascinating to see the unique way of staging a wedding photo. Was this common in 1910? Who knows! 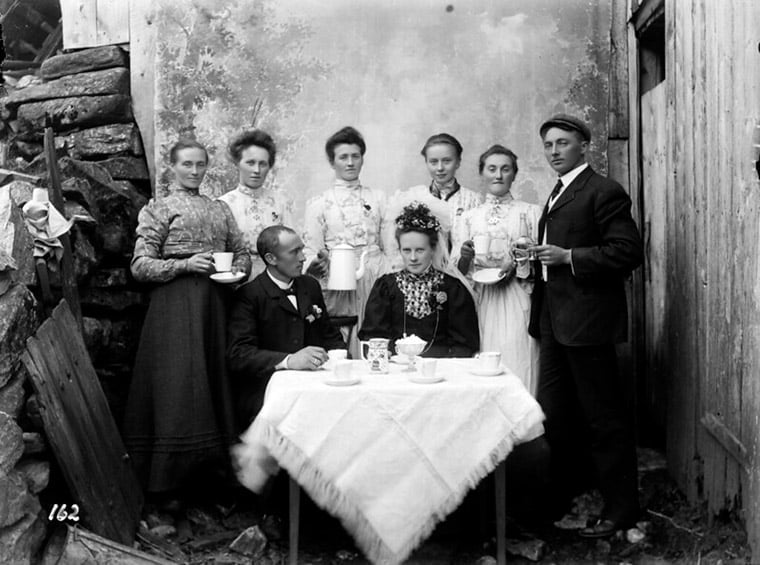 So far we've seen a few boats making an appearance. But don't make the mistake of thinking everyone got around by boat! There were several other transport options too, as Maurseth's archive captures.

Transport around the Nordfjord area

The next photograph shows four people in a horse and carriage. According to the archive notes, the carriage stands at Per-hus-tunet in Stryn, although the men are from Hornindal. 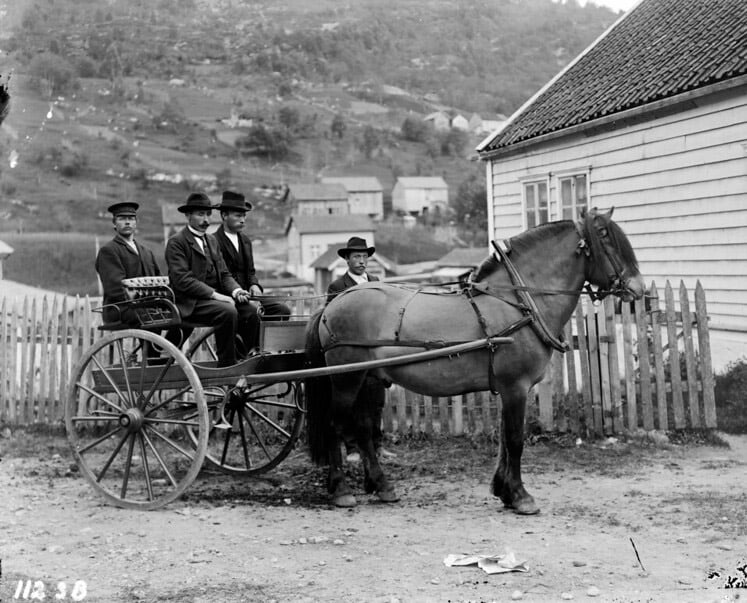 How quickly transport changes! Taken less than ten years after the above, the next image shows a car in Stryn. To be fair, this was a wedding procession and therefore a special occasion! According to the archives, Jenny Arnes and Olav Osnes were the bride and groom. 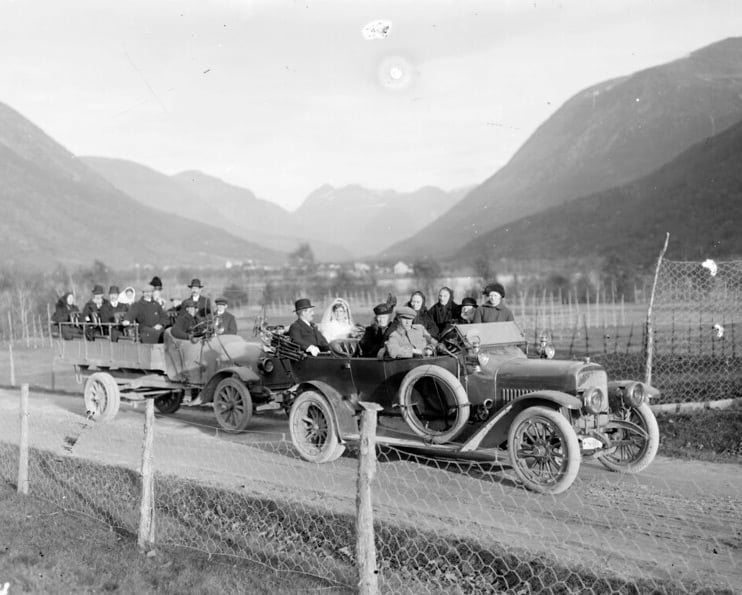 And of course, there were also bicycles! Using these basic bikes to get around the steep terrain would have been a challenge. Although the photo was taken in 1910, the precise location is unknown. 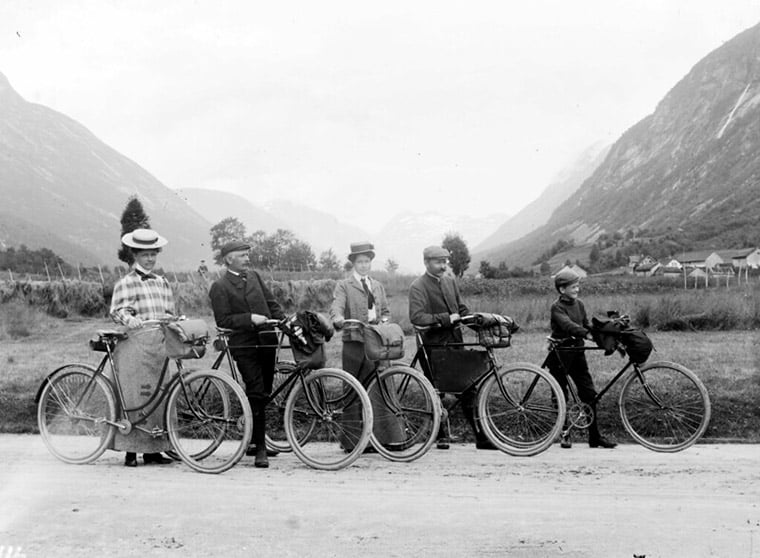 That brings our latest look through Norway's vast photo archives to a close. Are you enjoying this series? I hope so, as we've plenty more to come. If you have any specific requests, let us know in the comments. We'll do our best to find archive photography from different parts of the country.

Don't forget to join our weekly newsletter. You'll be the first to find out about new articles on all things Norway.