The Norwegian government is planning a proposal to force businesses in Norway to accept cash payments. Here's what you need to know about the proposal, and why it might be happening.

Anyone living in Norway or who has visited recently will know that the country is on the verge of becoming a cashless society. Many see cash as useless, with some businesses refusing to take it.

However, that may be about to change. The ministry of justice has sent a proposal out for consultation that would force all Norwegian businesses to accept cash.

Most locals in Norway pay for everything with credit cards or digital payment solutions like Apple Pay. The Norwegian app Vipps has proved wildly popular to pay for small items and to share costs among groups of friends.

Some smaller shops have stopped accepting cash altogether. I understand why. Dealing with Norwegian currency as cash adds complexity to a business, adding admin overhead and of course, the risk of robbery.

Even some recent nationwide fundraising initiatives have stopped accepting cash. But there are downsides too. Not everyone is comfortable with digital solutions.

There have been issues with payment systems going down in recent years. And of course, there are issues for tourists who do not have access to all the digital payment systems.

While the government has watched as the country sped towards digital, it now wants to apply the brakes.

Led by the justice minister Emilie Enger Mehl (Center Party), the minister of justice has proposed to strengthen consumers' rights to pay with cash in Norway.

The government believes that the current law—which does suggest businesses have to accept cash—is vague when it comes to which payment situations the consumer has the right to pay in cash.

The ministry's proposal would strengthen consumers' rights to pay with cash “in all staffed places of business where goods or services are sold.”

The justice minister highlighted the potential for problems when electronic systems are interrupted. This happened the day before Norway's constitution day earlier this year.

Consumers stocking up on champagne, beer and food for the big day were forced to use cash in some places, or miss out. Mehl said that experience “showed us that the ability to pay with cash must be preserved.”

Her words are backed by Kim Hamre from the organisation Ja til kontanter (Yes to cash). He said companies not accepting cash are discriminating against the elderly and other people who may struggle with digital solutions.

“Cash is also important in the event of a cyber attack, natural disasters or other events that could knock out digital banking and payment systems,” Hamre said.

A help for tourists

Guaranteeing the right to pay in cash would also be a major win for incoming tourists. While many tourists do rely on their debit and credit cards, it's not always enough.

Some remote attractions that are more popular with Norwegians only accept payment by Vipps. For example, kiosks selling coffee at events or non-staffed parking areas near popular hiking trails.

As helpful as Vipps is to Norwegians, it is not available to visitors because of the requirement to link a Vipps account to a Norwegian bank account.

The hearing process on the proposal runs until 19 December. Its timing surely raises its chances of being adopted.

The country is currently under a raised level of national preparedness given the situation in Ukraine and the political uncertainty involving Russia. As part of this, officials recently urged everyone in Norway to keep some reserves of cash with them, in case of emergency. 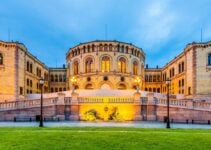