Skip to content
Home » Living in Norway » Norway & the EU: The Relationship with Europe Explained 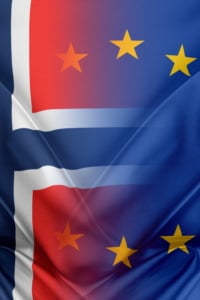 Norway's relationship with the EU is complex. Here's what you need to know about how Norway interacts with Europe.

Join us as we try to demystify this intricate relationship, what it means for Europeans and Norwegians today, and the historic reasons for today’s situation.

Troubled beginnings between Norway and Europe

Norway applied for membership in the European Economic Community (EEC) in 1962. The EEC’s aim was to bring about economic integration among its member states, and it later evolved into what we now know as the European Union.

Norway’s 1962 application ended up not leading anywhere. Not because of Norway itself, but because France rejected a similar application by the United Kingdom.

In a sort of domino effect, negotiations with countries that had strong economic ties with the UK (Norway, Ireland and Denmark) were suspended. The next attempt would come in 1972, and be associated with a referendum.

The 1972 EEC referendum in Norway

Norway, Denmark, the UK and Ireland’s second attempt to join the EEC would come in 1972. All except the UK decided to submit the plan to a referendum.

In Norway, arguments for joining were that it would secure peace between old enemies, increase cooperation and ensure economic growth. Arguments against joining were that it would undermine Norwegian sovereignty, create a new power bloc that could weaken NATO (a very important consideration, at the height of the cold war), and endanger the fishing and agriculture sectors.

The “No” camp ended up winning, with 53.5% of votes, and prime minister Trygve Bratteli (Labour) resigned. The next attempt would come two decades later.

The 1994 EU referendum in Norway

The second referendum was held on November 28th, 1994. By that time, the EU had been created and had 12 member countries (it now has 27).

Gro Harlem Bruntland’s Labour government, which backed Norway’s membership, decided to strategically hold the referendum after Finland’s (in October) and Sweden’s (earler in November), in the hopes that a Yes victory in those countries would sway undecided Norwegians.

The plan did not work. Despite both the Finns and the Swedes voting to join, Norwegians voted No in a proportion of 52.2%.

A huge difference between the two referendums is that by the time the 1994 vote took place, Norway had already joined the European Economic Area (EEA). This meant that access to a common European market was no longer on the Yes side’s list of arguments, since that market would be accessible regardless of the referendum’s results.

By now, if you’re confused by all the acronyms (EEC, EEA, EU), you’re not the only one. Many ordinary Europeans would be at a loss trying to explain them. But let us have a go at it.

The EEC was the European Economic Community. It's what came before the EU, and has now morphed into the EU. Norway has never been a member.

The EEA is the European Economic Area. It is a common market that includes all EU countries and three EFTA countries (Norway, Iceland and Liechtenstein), and ensures the free movement of goods, services, capital and people within its area.

The EFTA is the European Free Trade Agreement. It includes Norway, Iceland, Liechtenstein and Switzerland and means these countries can trade freely with each other. Although Switzerland is a member of EFTA, it does not take part in the EEA.

The Schengen Area is a border control agreement. In essence, it means that you only deal with immigration officers when entering the Schengen Area; not when crossing borders between countries within the area.

What it all means

One of the reasons why Europe is so complex is that countries have mixed and matched which of the different agreements apply to them.

Switzerland is part of the EFTA and Schengen, but not the EEA, the EU or indeed, the eurozone.

Where does the UK fit in all this?

The UK is now part of none of these agreements. Before Brexit, it was part of the EU and the EEA, but neither of Schengen nor the eurozone.

How Norway and Europe work together today

Norway being part of the Schengen Area means that visas that are valid for Schengen countries are also valid for Norway. Norways is also part of the EEA and the EFTA, which gives it access to the single market.

Crucially, the EEA does not include agriculture and fisheries, which means that trade affecting those areas is regulated by separate agreements.

This is one of the most visible impacts of Norway not being a fully-fledged member of the EU, and one of the biggest reasons for the agriculture and fisheries sectors being so opposed to EU membership.

Norway’s much needed access to the common European market is not free. Norway has to make substantial contributions to the EEA EFTA (which in turn contributes to the EU budget) to maintain it. Membership in the EEA and EFTA means Norway has to follow around 20% of EU laws.

These European laws, whenever they result in “significant new obligations”, have to be approved by the Norwegian parliament. This is often done unanimously, and most other times with a broad majority.

Norway also participate in many of Europe’s programmes, bodies and initiatives, including the Horizon Europe research and innovation fund, the European Defense Agency and Europol.

This has some Norwegian EU opponents saying that Norway is essentially a de-facto EU member, with all the obligations that such membership entails, but without representation at the EU parliament. What most people agree on is that Norway is as close as can be to being an EU member without actually being one.

Could Norway join the EU in the future?

Joining the EU is still controversial in Norway. The two largest parties (Labour and the Conservatives) are pro-EU, but some parties and unions are against even EEA membership, let alone joining the EU.

People involved in fisheries and agriculture are still largely opposed to Norway joining the EU. These people often support the Centre party, which is one of the two parties forming the current government (the other being Labour). As such, any change in the status quo seems very unlikely in the short term.

Much of the establishment being pro-EU has resulted in the current situation, where Norway contributes to the Union as much as if it were a fully-fledged member, and enjoys much of the same benefits.

Formally joining the EU at this point would have few practical consequences, aside from participation in EU parliamentary elections. On the other hand, it would be very controversial and highly symbolic.

Opinion polls have consistently shown that a majority of Norwegians are against joining the EU, but in favour of remaining in the EEA. In short, people support the status quo.

1 thought on “Norway & the EU: The Relationship with Europe Explained”