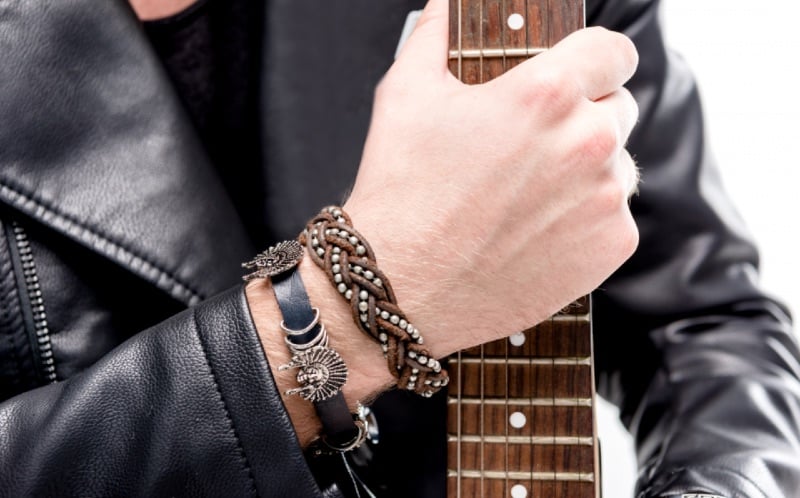 There's more to Norway than oil and seafood. One of the country's biggest ever exports is an entire genre of music, but it’s not to everyone’s taste.

What comes to mind when you think about Norwegian music? Is it the cheesy ‘What Does the Fox Say’ of Ylvis or the 1980s stylings of pop-royalty a-Ha’s’ Take on Me’? Perhaps it’s the modern synth-pop of Aurora?

For many, all of this is irrelevant and Norway’s only worthwhile music is something altogether more… niche. Today it’s time to talk about Norwegian black metal.

Content warning: this article touches on themes such as self-harm and suicide.

An overview of heavy metal

Metal fans can skip this section! Before we delve into the specifics of Norwegian black metal, it might be useful for the uninitiated to take a quick dive into the overall genre of ‘heavy metal’. 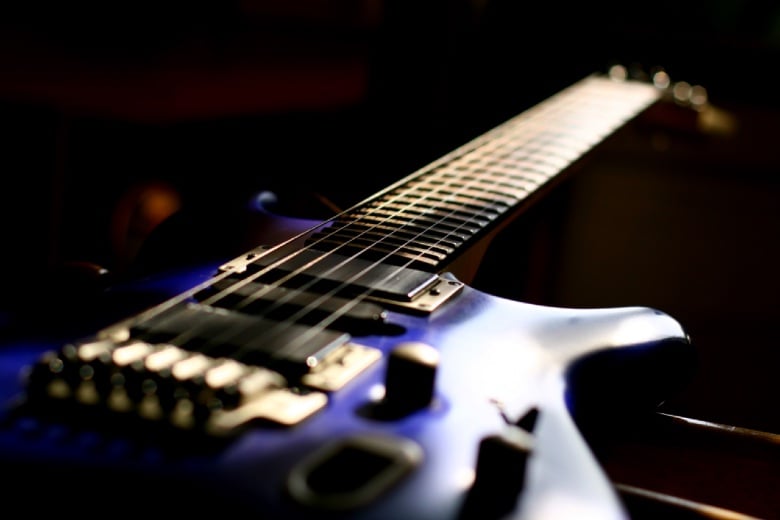 The lyrics deal with the darker side of life. Topics such as loneliness, isolation, social inequality, and death are frequent. In turn they will often have a visual style that fits with the music.

Each of the many different sub-genres of metal will emphasise or de-emphasise different aspects of this core. Death metal, as the name suggests, concerns itself with death, destruction and the afterlife. Detuned guitars, played fast, with low, growled vocals. Black metal? Well…let’s take a look.

What is Norwegian black metal?

Black Metal is primarily focussed on the occult. Themes such as satanism are commonplace and it is often billed as an anti-religious movement. Rather than low-growled vocals, Norwegian black metal generally has higher pitched, vocals more akin to shrieking.

In terms of production, this is also a key thing. It’s deliberately lo-fi. The music was originally intended to be solely for the people on the scene and was recorded on primitive equipment.

Even as the genre grew and made money, the bands would spurn polished production techniques.

One underpinning word that comes up in almost anything you read about black metal is ‘authentic’. Perhaps more than any other music genre, its artists strive to stay true to the roots of the music – by the fans, for the fans – and avoid corruption by commercial interests.

One final feature is that almost all of the black metal musicians, certainly in the genre’s early days, went by pseudonyms. 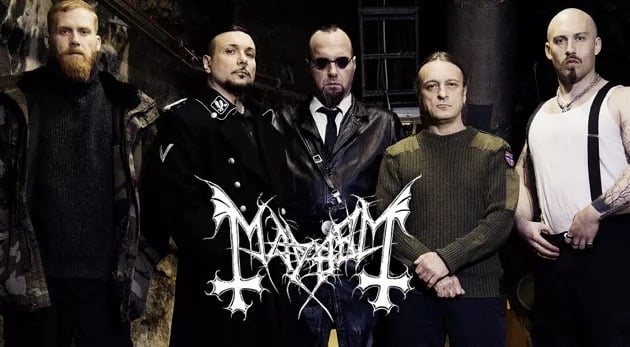 Like all musical genres, there are always disputes about the origin. Different bands will claim to be the pioneers and fans will take sides.

Black metal originally grew in the 1980s out of speed, death and thrash Metal. The name was coined as the title of Venom’s 1982 second album. Though that album is not considered Black Metal nowadays, the name is at least traceable to it.

When we talk about ‘True Norwegian Black Metal’ most people refer to the ‘second wave of Black Metal’. This grew out of something called The Black Circle, or the Black Metal Inner Circle, in the early 1990s and heavily involves the bands Mayhem, Emperor and Burzum.

This Black Circle was effectively kicked off by the suicide of Mayhem’s vocalist, Dead (Per Yngve Ohlin). His stage appearances, in which he wore corpse paint, often included butchering of dead animals and self-harm. He slit his wrists before shooting himself in the head.

He was found by Mayhem guitarist Euronymous (Øystein Aarseth) who rearranged the scene to take photos before calling the police. Euronymous also made necklaces out of bits of bone that he claimed were from Dead’s corpse.

A month or so later, Euronymous opened a record shop called Helvete (Hell) and a record company (Deathlike Silence Productions) in Oslo.

Helvete had black walls bedecked with medieval weapons and band posters. It soon became a focal point for the growing black metal scene and those who gathered in the shop and its basement became the Black Circle.

This was a group of young musicians who hung around the shop who believed in Euronymous’ ideals. They are often presented as being a satanic cult, though many members deny that it was anything real or serious. Rather, they say, it was a name Euronymous made up to convince the outside world that it was a real thing.

Their ideology was anti-society and violently opposed to organised religion, especially Christianity. They believed that Norway should not be a Christian country.

They also attacked the Church of Satan for being ‘too humane’ and said that they sought to spread hatred, sorrow and evil. It’s hard to tell how much of this was bluster and image and how much was serious but most of the former members claim the latter.

The dark side of the black metal scene

Claims to this ideology being all talk start to fall down a little in light of a number of real-life crimes perpetrated by members of the Black Circle. In 1992 alone, 8 churches were burned. 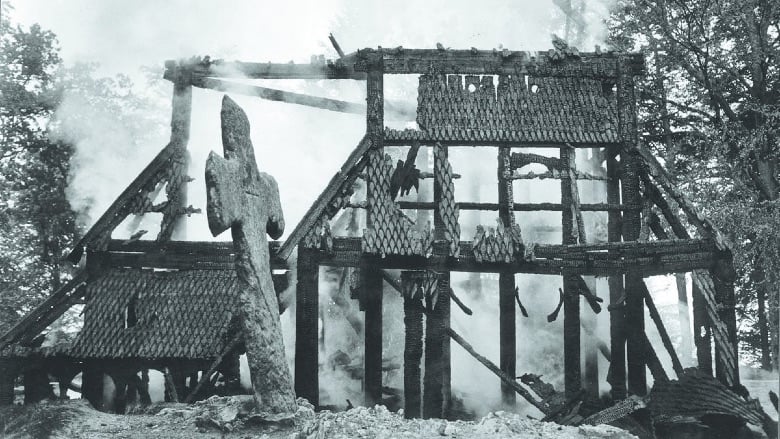 Count Grishnackh (Varg Vikernes) of Burzum was convicted of three and suspected of more. Faust (Bård Guldvik Eithun) of Emperor and Jørn Inge Tunsberg of Immortal were also convicted.

These convictions came about when Vikernes gave an anonymous interview to Bergens Tidende claiming he knew who did them. By the time the article was published, police had already arrested him. Later Vikernes would claim that the church arsons were done in revenge for the desecration of Viking temples and monuments.

In 1992, Faust was walking home one night when he claims Magne Andreassen propositioned him in the Lillehammer Olympic Park.

Faust stabbed him 37 times and kicked him repeatedly in the head. The police had no suspects and it wasn’t until 1994 that he confessed and was sentenced to 14 years. He was released from prison in 2003.

In 1993, Grishnackh and Euronymous’s relationship became increasingly acrimonious. Euronymous closed Helvete and Grishnackh believed that it meant the few weeks he spent in prison for the church arsons was pointless.

One night in August, Grishnackh was driven to Euronymous’ Oslo apartment by Blackthorn (Snorre Ruch) of the band Thorns. After a confrontation, Grishnackh stabbed Euronymous to death before fleeing the scene, stopping only to dispose of his blood-stained clothing.

No one knows exactly what happened that night, or rather, no one really believes Grishnackh’s side of the story. Grishnackh claims that Euronymous had a plan to stun him and then murder him on camera. Euronymous supposedly lured him to the apartment under the pretence of signing a contract.

Grishnackh claims he intended to sign the contract and leave but that Euronymous panicked and attacked him so he killed him in self-defence. Faust believes Grishnackh fully intended to kill Euronymous on that night no matter what.

Grishnackh was sentenced to 21 years for the murder, plus the church burnings that he finally admitted to and also possession of 150kg of explosives. He was released in 2009.

The events surrounding Mayhem, the Black Circle and the birth of the Norwegian black metal scene are the subject of the book Lords of Chaos: The Bloody Rise of the Satanic Metal Underground by Michael Moynihan and Didrik Søderling.

Lords of Chaos has been hailed as “the most thrilling non-fiction book since the Old Testament” and an “exhaustive resource regarding the seamy and Satanic side of pop music and culture”.

Count Grishnackh claims the book provides no insight into the real story and fails to understand what black metal is about. Instead, the authors have “managed to fill the heads of a generation of metal fans with lies”.

Lords of Chaos on the silver screen

The book was made into a film in 2018 by Grammy award-winning music video director Jonas Åkerlund. The adaptation starred Rory Culkin as Euronymous, Emory Cohen as Varg Vikernes and Jack Kilmer and Dead. Critical opinion of the film is divided, with some proclaiming the film ‘frequently unpleasant but oddly compelling’ (Indiewire), ‘provokes both awe and revulsion’ (Hollywood Reporter) and ‘tremendous fun’ (Variety).

On the other hand, ‘the film’s understanding of the scene is more like contempt’ (The A.V. Club), ‘It’s not fun. It’s not sad. A lot of the time it’s not even all that interesting’ (Rolling Stone) and ‘never establishes a coherent or interesting point of view’ (New York Times).

I saw the film when it was on release in the UK and I have to say I enjoyed it tremendously. It’s not an easy watch if you’re squeamish (apparently one audience member feinted and another vomited in its first screening!) but I agree more with the first set of reviews than the second.

Regardless of how you feel about the truth of the subject material, the movie is well put together by Åkerlund and is well worth a watch…if you’ve got the stomach for it!

In terms of sound, it’s often stated that Bathory’s first four albums, released between 1984 and 1988, laid the groundwork for the second wave of black metal. Also important was a new style of guitar playing pioneered by Euronymous of Mayhem and Blackthorn of Thorns.

Unlike most metal, which used power chords made up of two or three notes, they instead used all six strings to create what you might call a more melodic form of dissonant noise!

Ironically, Mayhem’s first full album, De Mysteriis Dom Sathanas, the only one featuring Euronymous and Vikernes, was only released after Euronymous’ death and in the same month of Vikernes’ trial for his murder.

Darkthrone, another of the great Black Metal bands actually started out in death metal. They ‘found their way’ and became an influential sound in black metal for the next 15 years before morphing once again into a more primitive thrash band.

Emperor might be a controversial name among some black metal purists but there’s no doubting their place in black metal history. They were in the Black Circle after all. But some feel that their use of symphonic elements and greater technicality and musicianship were antithetical to black metal.

Dimmu Borgir are also slightly controversial for putting out records that are actually easy on the ear! For All Tid was lo-fi but symphonic and Stormblast was much more polished. What sets them apart, however, is that the vocals are much better than pretty much all of their contemporaries.

There are many other bands we could mention, and their fans would no doubt proclaim them to be the best. Immortal, Satryicon, Thorns, Gorgoroth, Ragnarok, Carpathian Forest… All of these names will feature in someone’s top ten list along with many others.

If you’re not already a fan and you fancy giving the genre a try, then you can search for these names and dip your toe in the water. As always, let us know how you get on in the comments!

5 thoughts on “The Story of Norwegian Black Metal”