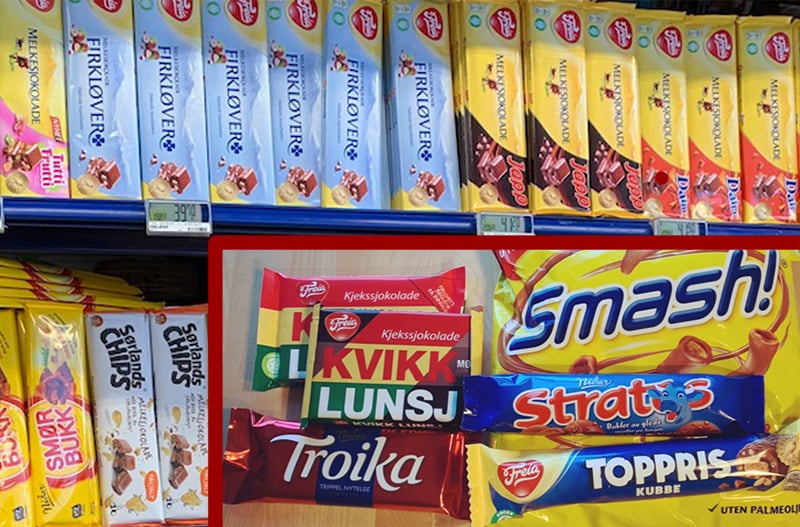 NSFD: Not Safe For Dieters! The Norwegian chocolate to look out when visiting a supermarket in Norway.

I can't quite believe I've been running this site for so long without looking in detail at chocolate!

The vast majority of chocolate on sale in most Norwegian stores comes from just two companies: Freia and Nidar. Of course, major brands like Mars, Twix and Kinder are also available on the shelves in Norway, but that's not what this article is about.

Nidar is the big rival to Freia and is based out of Trondheim in central Norway. The company began in 1912, with Christmas and Easter marzipan the first notable products.

In 1980 the company merged with a Bergen-based company to create ‘Beregene Nidar' but 17 years later, the Nidar name was restored and all Bergen production moved to the Trondheim facility. Today the company is part of the giant Orkla corporation.

Many Norwegians prefer to buy their chocolate in large bar form to share or keep for a while. They're super easy to spot in the supermarkets, and are often found with a discount.

The most popular is Freia's Melkesjokolade, a creamy, sweet, milk chocolate. Simple, but a classic. I know several readers of this website like Walters Mandler, which adds in chopped, caramelised, salted almonds into the standard milk chocolate bar.

The Freia bars with pieces of Kvikk Lunsj (more on that later) are also popular. Just recently we discovered a new variant from Freia: Tutti Frutti. This delightful variant includes tiny pockets of fruit jelly buried inside the milk chocolate. I’m really hoping this one sticks around for good!

These salty-sweet tornadoes are my absolute favourite Norwegian chocolate! Smash from Nidar are simply corn chips covered in chocolate. 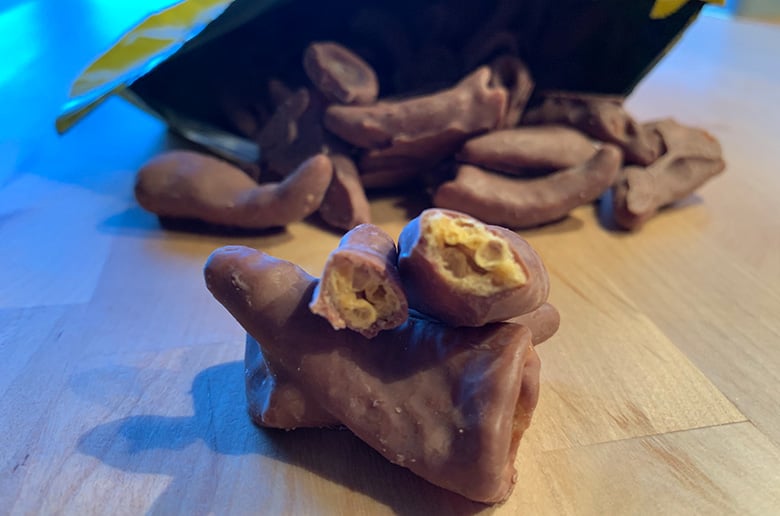 Most commonly sold in bags, Smash is also available in bar form. That's simply a regular chocolate bar containing bits of Smash, rather than being one big Smash bar!

I will have caused outrage among my Norwegian readers for not starting with Freia's Kvikk Lunsj, the most iconic chocolate in Norway. It has such status because it's synonymous with the one true love of all Norwegians: the outdoors. 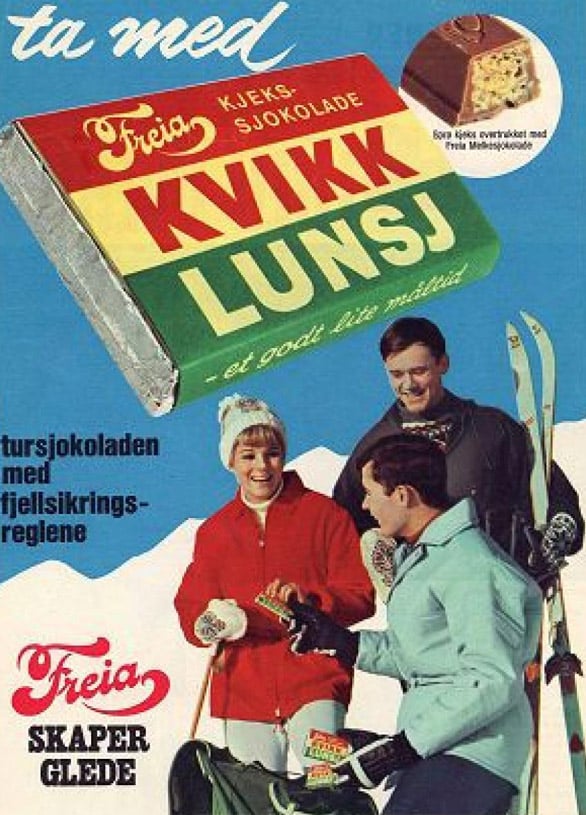 Nestle, maker of KitKat, has argued in European courts since 2002 that it has the right to trademark the shape. The courts disagreed as KitKat isn't commonplace cross the continent. Freia couldn't buy that kind of publicity.

Because of the court cases, interest in Kvikk Lunsj has increased outside of Norway too. British newspapers the Guardian and Independent both rated the Norwegian bar higher in blind taste tests. They key? The chocolate-to-wafer ratio is higher in the KL. 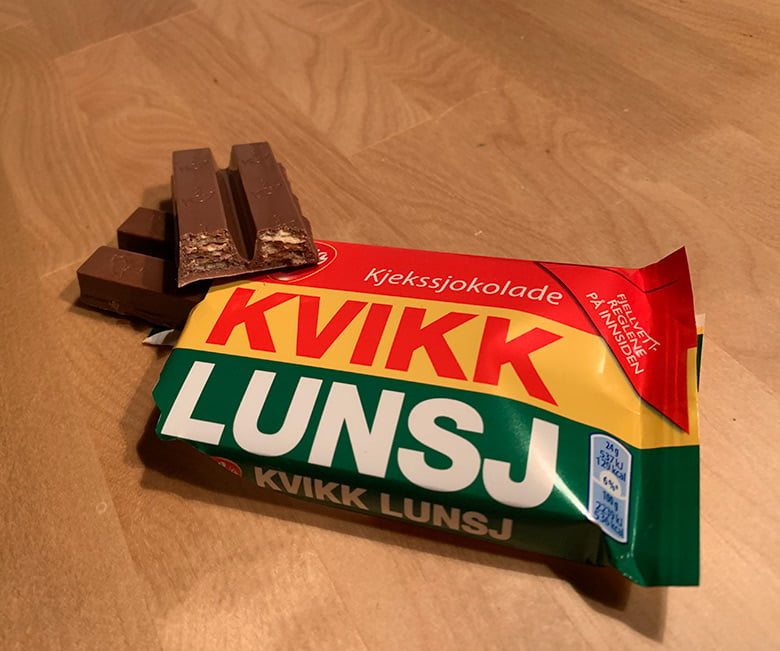 Freia has introduced a dark chocolate version of the Kvikk Lunsj that is just as tasty, albeit a few kroner more expensive. It goes great with a black coffee.

The history of Stratos is so long and varied that its maker Nidar has a webpage dedicated to it. The short version: Nidar launched Stratos in 1936, a year after the Aero. It cost 25 øre, which is a quarter of one krone!

It was engineer Jørgen Holmsen who discovered the ‘airy' Aero chocolate bar at a trade fair in Germany, and returned to the Nidar factory to try to create something similar. 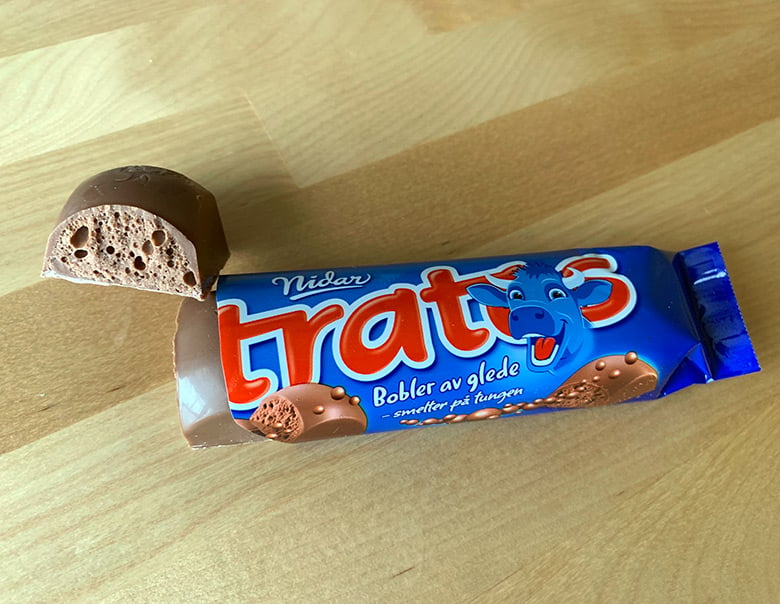 While the chocolate itself has stayed fairly consistent over the years, the size of the product and design of the packaging have changed a lot.

These days, Stratos is best known for its commercials featuring the bright blue happy cow you can see on the wrapper. Just look at those udders go…

Launched in 1969, Freia's Toppris Kubbe is similar to the Toffee Crisp or Lion Bar. This chocolate bar is filled with light toffee and rice, so it's chewy with a slightly crispy texture to it.

It reminds me a little of the rice crispy cakes I used to make as a kid (definitely not as an adult though, no, not, definitely not) 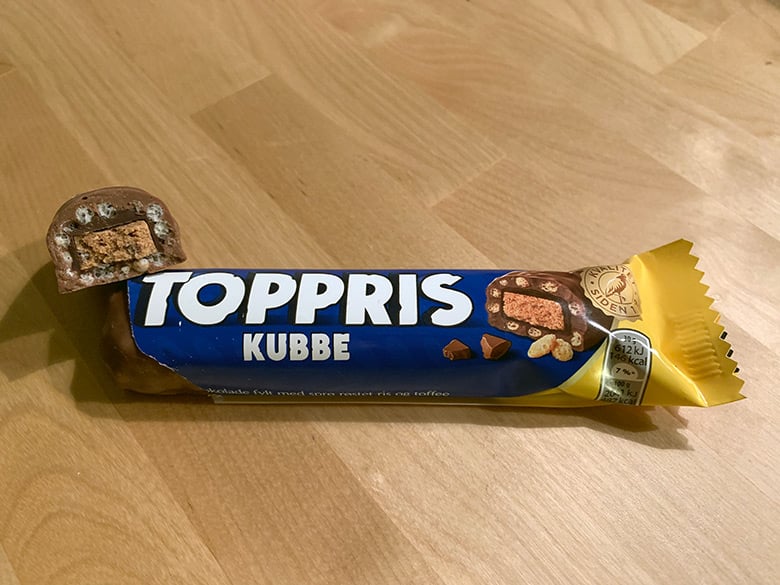 There has also a peanut version round and about called ‘Peanøtt Kubbe' although I haven't seen it for a while. The peanut taste is much more overpowering than the rice of the original. However, I'm not sure whether that's because that's the genuine taste, or because I really don't like peanuts very much!

I've never quite been able to make up my mind about Troika. There's a lot of flavour packed into the three layers of soft raspberry jelly, truffle and marzipan, all coated in dark chocolate, but to my taste it's a somewhat strange combination.

I'm told some people nibble away the chocolate and other layers leaving the jelly to the end. Now while I used to do the same with Jaffa Cakes, I can't imagine doing that with Troika. I'd love to know if any of you do! 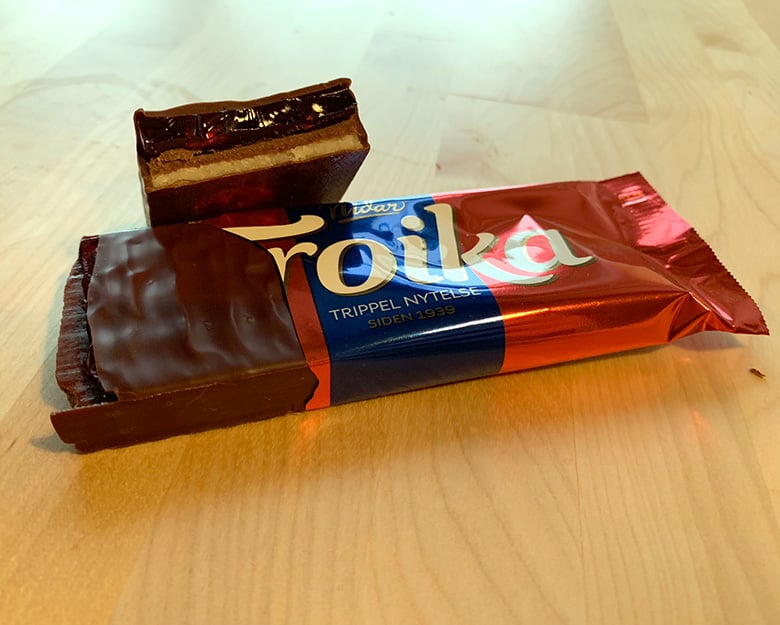 At the moment an orange edition is available in stores, which replaces the raspberry jelly with an orange jelly.

Of course, it would be wrong to stop just with the big two. Norway has its fair share of entrepreneurs trying to make it in the chocolate world. Up in Bodø, British chef Craig Alibone has made quite the name for himself with his premium chocolate brand and shop. Read this interview with him to find out more.

Located inside a former boathouse, the cozy Geiranger Sjokolade café serves rich hot chocolate made in the factory downstairs. The store sells nicely packaged sets of chocolates that make great gifts. For a unique flavor, try the famed blue cheese chocolates, or a bar flavored with sweet berries from the region’s valleys.

On my recent trip to Svalbard, I stumbled upon Fruene cafe which did a roaring trade in its homemade chocolate. I did my bit for the cause and tested out a couple. My favourite? The creamy white chocolate bar complete with polar bear print!

This has been without doubt one of the most enjoyable posts I've ever researched for Life in Norway. Now though, if you'll excuse me, I need to call my dentist.

19 thoughts on “Norwegian Chocolate Bars You Must Try”