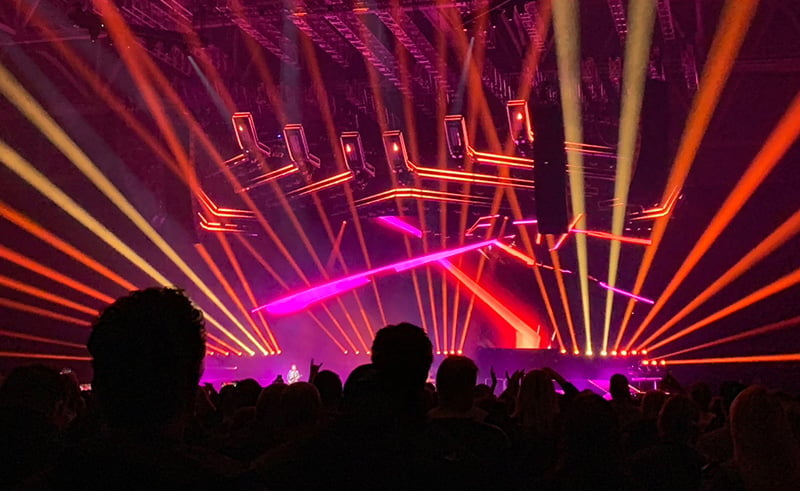 Are you planning to attend a concert at the Telenor Arena? You’re probably full of questions, so let’s answer them.

When touring bands or other major events come to Norway, there’s really only a couple of venues in the country capable of hosting such a major event. Located at Fornebu just outside Oslo, the Telenor Arena is one such place.

A major venue for the Oslo region

The multipurpose arena has hosted a multitude of events since its opening in 2009. The arena has hosted events as diverse as top-flight Norwegian football through to the Eurovision Song Contest. These days, it is mostly used for major concerts and various consumer and business shows.

The venue has a capacity of 15,000 for sporting events, and up to 23,000 for concerts. If you're planning to attend an event or work nearby and are just curious, read on!

The short history of Telenor Arena

Despite its current use, the facility was actually built primarily to host football matches. In the early 2000s, Stabæk continued to play their home matches at the outdated Nadderud Stadium, which was well below standard for the Norwegian Eliteserien. 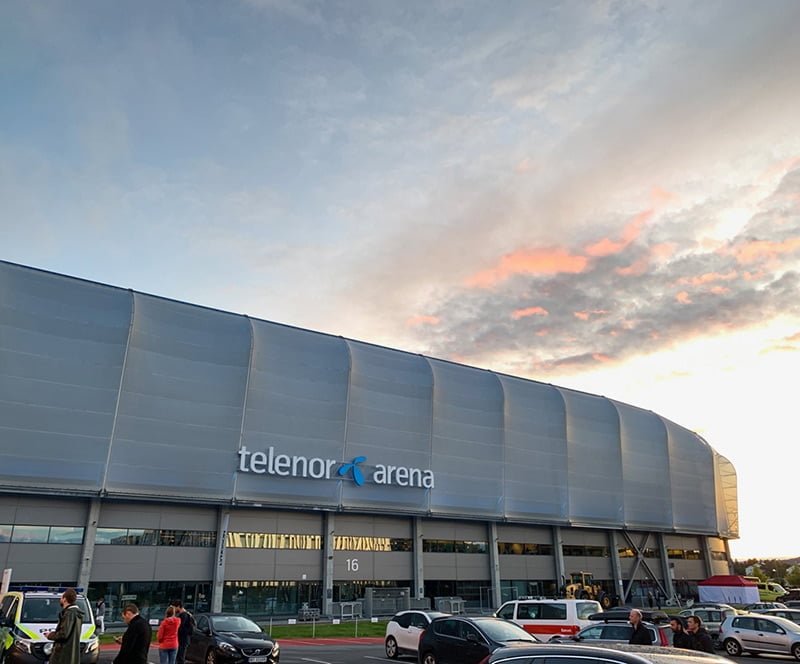 As the Fornebu area was (and still is) undergoing redevelopment, a plot for a sports arena was secured after years of negotiations and public grants.

The arena cost NOK 585 million to build, and more than half of that was for the sports element. A cousin of Queen Sonja, Kjell Christian Ulrichsen owns the arena through a series of companies. He also had a financial interest in the club during the negotiations.

Once the arena was built, Stabæk signed a 40-year lease. However, the arena holding company hit financial trouble almost immediately and tried to end the lease with the football club in order to free up the calendar for more lucrative events.

Stabæk was offered the option to take over the responsibility for the arena, but ultimately refused to accept the risk and chose to move back to Nadderud.

Hva skjer? What’s on at the Telenor Arena

Sports are still played at the arena on rare occasions. This year the women's Norwegian Cup Final in football will be held there, and the Norwegian Handball Federation has also tested out the venue. However, it's primary use now is split between business/consumer shows and concerts.

This isn't the place to list who is set to play at the venue, for these things are always changing! New announcements can be made at any time of the year. However, most concerts at the arena are for major acts and therefore the tours are announced well in advance. 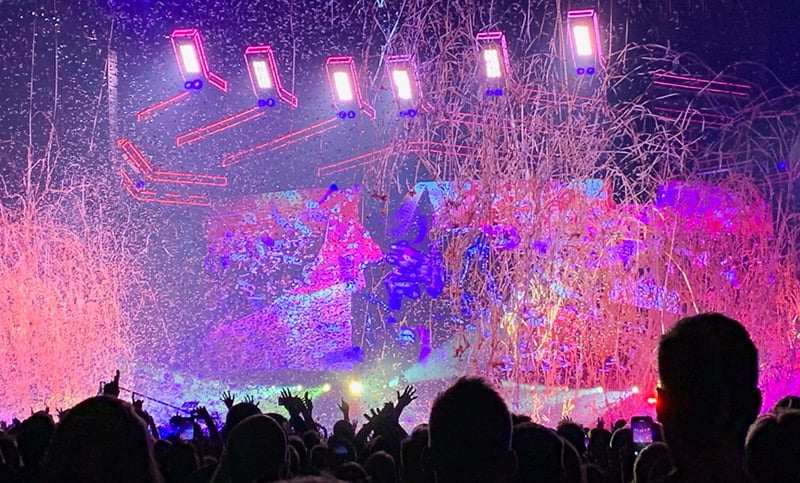 The same goes for business and consumer shows. Some of the popular events hosted at the venue include the Oslo International Horse Show, the property exhibition Boligmesse, and the Norwegian travel industry fair TravelXpo.

How to buy tickets for events

Arrangements for tickets are always published in advance on the arena website. Typically sales are done online via Ticketmaster, but there are exceptions so check to make sure.

Some concerts will not sell out with tickets available up until the last minute. On the other hands, concerts for the likes of Justin Bieber or Lady Gaga sell out within minutes. So when a concert is announced, look for the date and time tickets go on sale.

When you arrive in the vicinity of the arena, you pass through a security pat-down before entering the outdoor pre-event space. Here you'll find food trucks and merchandise stalls, depending on the event. There are toilets available, but the queues are big. If you can wait until you enter the arena, do so!

Once you're ready to enter the arena, you need to check the entrance number (felt) on your ticket. The turnstiles are automated and require you to scan the barcode on your ticket. This works the same whether it's a paper ticket, a PDF on your phone, or the Ticketmaster app.

There are three levels of tickets available for concerts: VIPs, seating, and standing. The two ends of seating when the arena is used for sport are not used for concerts. The stage covers one end.

I've only ever stood at events here, so I can't comment on the experience of the other options. The standing area allows you to get much closer to the stage, and of course makes moving about during the concert much easier. However if you don't like the idea of standing for hours, the standing tickets might not be the right option for you.

At the back of the hall, you'll find a bar, merchandise stall and the bathrooms. The bar moves fairly quickly and there are several entrance/exit points to keep things moving.

I was curious to see the venue offer an app, which it claimed would enhance your experience. Functionality included the ability to order and pay for drinks and queue in a shorter queue. This is similar to how the Vipps payment option works at the Intility Arena for football games, so I thought I'd give it a try.

But no matter how hard I looked, I couldn't find a way to add credit card details without placing an order first. From a usability point of view, this is beyond absurd.

Before or during an event, the arena (at least the standing floor) is dark. Fumbling around for a credit card to enter the details into the app in the darkness? Hardly a positive user experience! I'm not at all surprised it had such abysmal ratings and reviews in Apple's AppStore.

There was some other useful functionality such as the ability to buy shuttle bus tickets, but otherwise this is a completely unnecessary app. If you're thinking of downloading it, don't bother.

How to get to the Telenor Arena

Traffic during events is a major problem, because there is just one road in and out of Fornebu. Venue management strongly encourage the use of public transport because parking is extremely limited and queues to get out of the car parks can be long. Here are your options:

Local bus: Oslo bus 31 is a high frequency route between Fornebu and downtown Oslo. This runs around every 10-12 minutes during the daytime and weekday evenings. Frequency can be reduced on weekend evenings, but is often increased for major events. Look for bus 31X which are additional limited-stop buses before and after events.

However, the local buses can get extremely crowded for popular events. This is a particular problem when leaving the arena, no matter how many extra buses are laid on. Check Ruter for timetables.

Shuttle bus: The arena puts on special shuttle buses for major events, which will be advertised in advance. These run from downtown Oslo directly to the arena and do not stop on the way. Tickets need to be purchased separately for these services and are usually priced at 100kr for the return journey. As with the local buses, queues can be long after major events.

Lysaker station: This major railway station is just a 15-minute walk from the venue. It's my preferred option as trains serve the National Theatre, Oslo S and Oslo Airport. The Airport Express train also leaves from Lysaker. Bear in mind that engineering works can often disrupt the rail services late in the evening, especially on weekends, so do check.

The walking route isn't signposted as well as it could be. Simply cross the road (with the bus stops) outside the station and take the steps/lift up to Lysaker Torg. If you can't find your way from here, ask a local, use Google Maps, or simply follow the crowds!

Taxi: I know several people who prefer to take the local bus to the arena and then splash out on a taxi home. This is a good option if there is a group of 3-4 people and/or you live away from central Oslo. There are plenty of taxis waiting outside the arena and the rank is signposted. Once again, except to queue.