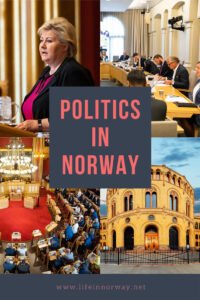 Learn about the political parties in Norway with this introduction to the parties represented in the Norwegian parliament.

When I moved to Norway a year after the 2010 British General Election, Norwegians had many questions for me. One of the most curious was why British people had such a problem with the notion of a coalition government. That's because in Norway, it's the norm.

One of the biggest differences between politics in Norway and in the U.K. (and for that matter, the U.S.) is the number of parties that consistently win seats in the Norwegian parliament.

The form of proportional representation used means that one party winning an overall majority is almost impossible. In fact, coalition governments in Norway often consist of three or even four parties to secure a majority.

With the 2021 election fast approaching, we take a look at the main political parties in Norway. But first off, it's important to understand more about how the elections work.

How parliamentary elections work in Norway

Elections take place using a form of proportional representation in multi-seat constituencies. The method use is a modified Sainte-Laguë method. Its principle is that the number of seats a party gets should be as close as possible to the number of votes received. However, there are some important exceptions, most notably the 4% rule.

Levelling seats, also known as the 4% threshold, resolves situations in which a party receives significant support but not enough in any single constituency to win a seat. Levelling seats are granted when a party earns more than 4% of the vote.

This means that obtaining 4% of the popular vote is the number one goal for all smaller parties. To understand why, look at the 2017 results. The Green Party received 94,788 votes, which was 3.24% of all votes, and received one seat. However, the Christian Democrats who only received 122,797 votes, just 4.2% of all votes, received 8 seats. As they were above the 4% threshold, they were entitled to levelling seats.

There is also an overrepresentation of rural constituencies, to prevent members from urban-dominated areas always being able to outvote members from rural areas when in parliamentary votes.

Now, here are the political parties in Norway that have representatives in the Norwegian parliament as of 2020:

Labour Party. Despite being the biggest party in the Norwegian parliament throughout the period, the Labour party has been in opposition since 2013. Although taking a traditionally left-wing perspective, there are two parliamentary parties that sit to the left of Ap.

In their words: “The Norwegian Labour Party is a social democratic party committed to liberty, democracy and social justice.It is a reformist party that believes in partnership and cooperation on national as well as international level. By acting together rather than just as individuals, we can make a better society for all.”

Conservatives. The party of the current Norwegian prime minister, Erna Solberg. Norway's Conservative party are a right-leaning party that gained 25% of the vote in the 2017 general election, enough to continue their coalition government.

In their words: “The Conservative Party will pursue a conservative progressive policy based on Christian cultural values, constitutional government and democracy to promote personal freedom and social responsibility, co-determination and ownership rights, and a binding commitment to national and international cooperation.”

Progress Party. FrP is Norway's farthest right mainstream party, having gathered momentum throughout the 2000s and early 2010s. In 2013 the populist party entered government for the first time as part of Erna Solberg's (H) first coalition.

In their words: “The Progress Party is a libertarian party that believes in freedom for the individual, lower taxes, prosperity and a limited government that empowers people.”

Centre Party. Despite the name, Norway's Centre Party is hard to define by modern political terms. Over their life they have joined both left- and right-leading coalitions. They have their roots as a farmers' party, and campaign primarily on issues of protectionism and decentralisation.

In their words: “Good services close to people provides security and predictability in everyday life. The Centre Party believes that proximity is the answer – not the problem. We live in an elongated country where proximity has played an important role. It has created vibrant local communities in the north, south, east and west and has been a success story for our country.”

Socialist Left. Formed out of a coalition of smaller socialist parties and independents, SV is a mainstream democratic socialist party that pitches itself to the left of Labour. Campaigns typically revolve around a strong public sector, stronger social welfare programs and increasingly, environmentalism. SV were part of Norway's coalition government from 2005 to 2013, led by Jens Stoltenberg.

In their words: “The differences between the financially privileged and most ordinary people are increasing. While those who are impoverished or sick are being hit by welfare cuts and the help available is being eroded, right-wing politicians are constantly cutting the taxes paid by the elite. If these unfair differences are allowed to continue the society of tomorrow will be a colder place.”

Liberal. Despite the name translating as ‘left', Norway's Venstre takes a centrist stance. Left refers to the social-liberal stance of personal freedoms under an active state. The party takes a pro-immigration stance and is one of the more vocal supporters of European cooperation. However, the party stops short of advocating EU membership. Venstre have supported the Erna Solberg's governments since 2013 as either full members or on a confidence-and-supply basis.

In their words: “Liberal policy is made with the individual at heart. We crave fair solutions that would bring freedom to everyone. We believe that everyone should have the opportunity to use their abilities to the best for themselves and the society.”

Christian Democrats. KrF combines a socially conservative stance with centre-left economics. Christian values remains its core distinction. Former leader Kjell Magne Bondevik served as Prime Minister from 1997 to 2000 and from 2001 to 2005. As with Venstre, KrF have supported (formally and informally) the Solberg government since 2013, although not for the entire time.

In their words: “The Christian Democrats (KrF) has a vision of building an open society based on Christian and humanistic values in which responsible and value oriented citizens serve each other.”

Green Party. While MDG distance themselves from the traditional left and right blocks in Norwegian politics, the party's policies place them firmly on the left. They advocate green policies and social progressivism.

In their words: “The Greens want to create a society where we have good lives without destroying others. Norway stands at a crossroads, where long-term security, freedom and welfare for all are at stake. We have to deal with the goal of constantly producing more to buy and throwing more away. The Greens say no to the exploitation of people and the environment current politics.”

Red. Norway's farthest left party with a representation in parliament, Red believes in the creation of a classless society, replacing capitalism with socialism. They entered parliament for the first time in 2017, winning a single seat.

In their words: “A society based on equality is healthier, happier, and more socially just than a society based on capitalist competition. Community works. Cooperation works. Solidarity works. That’s why the fight against the increasing gap between the wealthy and those who struggle to make ends meet is Rødt’s priority.”

The biggest party (in terms of votes in the last general election) not to win a parliamentary seat were Pensjonistpartiet (PP), the Pensioners' Party. They received 12,855 votes, but for context, the number of blank/invalid votes was 23,681.

Norway also has a Sami Parliament, located in Karasjok. The 39 representatives are elected every four years from 7 constituencies, which cover the whole of Norway. 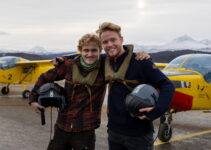 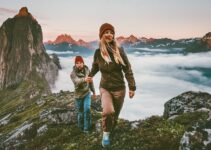 2 thoughts on “Political Parties in Norway”