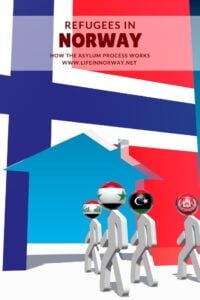 Facts and figures about the number of refugees in Norway and how the asylum process works.

Immigration to Norway has increased significantly in the past few decades. There are two principal reasons for this: European economic migration and the increase in refugees seeking protection.

Today we'll look at the situation of refugees in Norway and the asylum process by which they come. This is a controversial topic for many people in and out of Norway, but this post aims to share facts and figures, rather than opinions.

How many refugees are there in Norway?

Official data reveals that 4.4% of Norway's population has a refugee background. This amounts to 238,281 people. This breaks down as follows:

There have been 173,524 principal applicants for asylum, with an additional 64,757 applying because of a family connection to a refugee.

Of the principal applicants, 115,080 were direct applicants through the asylum process and 40,676 came via the European resettlement programme.

There has been a notable drop in the number of asylum seeker applications in Norway since the height of the European refugee crisis in the mid-2010s.

In 2020, the global health crisis resulted in a much lower number of applicants, although exact numbers are not yet available.

The asylum seeker process in Norway

You can apply for protection (asylum) if you are persecuted or if you fear persecution or inhumane treatment in your home country. Applicants must apply at the Norwegian border after making their way to Norway.

The only exception to this is for resettlement refugees, which will be discussed later.

When granted a residence permit, refugees and their families are obliged to complete an introductory programme, offered by local municipalities. The programme begins as soon as possible and usually runs for two years.

The introduction programme can be individually adapted and is designed to provide a pathway to further education or into employment. Much of the programme is based around Norwegian language training and social studies.

The number of resettlement refugees, also known as “quota refugees” that will be accepted each year in Norway is decided by the Norwegian government. In 2019, approximately 3,000 quota refugees were accepted.

Where do refugees live in Norway?

Once granted a residence permit, refugees may be located in any Norwegian municipality. Big cities are seen as synonymous with immigration, but many refugees are initially settled in rural municipalities.

A recent study from SSB looked in detail at the migration behaviour of refugees once they are settled in Norway. The report found that while refugees and their families do tend to move to big cities once settled, the proportion doing so in less than previously.

The history of refugees in Norway

While immigration for reasons of protection is seen as a modern development, there have been several previous examples.

People came from Hungary seeking protection in the 1950s. In the 1970s, people came to Norway from Chile and Vietnam. The 1980s saw arrivals from Iran and Sri Lanka, among other countries, while those fleeing war in the Balkan region came in the 1990s.

Since the turn of the century, groups of asylum seekers from countries including Iraq, Somalia and Afghanistan have dominated the asylum process.

Things changed significantly during the European refugee crisis of the mid-2010s. This period was characterised by the high numbers of people fleeing from across the Mediterranean Sea or overland through Southeast Europe.

Due to the potential risk of freedom of travel and open borders among member states, an EU/EEA-wide response was agreed. This ultimately led to the quota refugee system described above, to ensure any single country is not overwhelmed.

Norwegian attitudes towards immigrants and immigration

There has been a positive trend in attitudes among Norwegians in recent years. According to the latest Statistics Norway data, 78% agree that most immigrants make an important contribution to Norwegian working life.

From refugees to citizens

Refugees who are approved to become residents of Norway have the opportunity to become permanent residents and citizens in due course.

This matters, because those in Norway under the asylum process are offered protection for as long as it's required. If the situation in their home country changes, they can be required to return.

As with other groups of immigrants, citizenship is possible after seven years. This requires the successful completion of a citizenship test among other requirements.

1 thought on “Refugees in Norway: The Asylum Process Explained”