Archaeologists in Norway were stunned to find traces of a pagan temple, likely to date from the Viking Age. Never before has such a discovery been made in Norway.

Archaeological discoveries in Norway are nothing new, but this one is truly special.

A historic settlement in western Norway

In recent weeks, archaeologists from the University Museum of Bergen have worked on an excavation of approximately 8,000 square metres at Ose farm in Ørsta, western Norway. Located just south of Ålesund, Ørsta municipality borders the Hjørundfjord.

A large area of ground has been excavated, revealing traces of an Iron Age settlement, including several longhouses.

However, the most truly spectacular discovery is a building at the western end of the site. The 14m x 7m building is supported by sturdy wall posts, showing a bow-walled structure with a rounded end.

The interior of the building lacks the typical double rows of roof-supporting posts in its construction, commonly observed in the contemporary three-aisled longhouses. Instead, the inner centre is comprised of four large posts situated 3 x 3.5 meters apart.

There are just a handful of buildings with almost identical construction characteristics from the Late Iron Age in Scandinavia. These include the pagan temple sites Uppåkra in Southern Sweden and Tissø in Denmark.

While the Ose settlement is much smaller than those, this building must also be interpreted as a pagan temple, say archaeologists.

“It is a fantastic discovery,” researcher and field archaeologist Søren Diinhoff from Bergen University Museum told NRK. He is an expert on Norse buildings and has taken a prominent role in the excavation project. 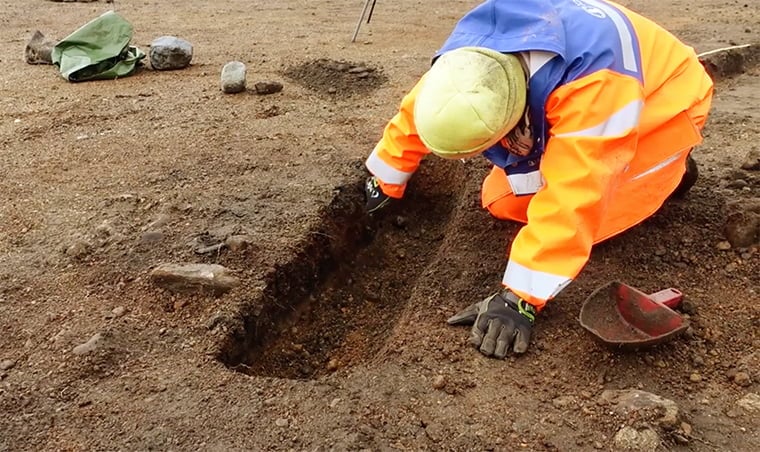 “It is unique in the Norwegian context. Throughout Scandinavia, traces of only a handful of such buildings have previously been found. We actually had to look at it for several days before we dared to believe what we saw,” added Diinhoff.

Diinhoff also said they believed the site was used for large religious gatherings at the summer and winter solstice, and that “sacrifice to the gods has clearly happened here.”

A ritual Norse sacrificial feast probably involved the blood of sacrificed animals splashed over walls, statues of gods and participants.

Faith in the Viking Age

Viking culture is intertwined with stories of the Norse Gods. Yet it was also the travelling northmen that began the introduction of Christianity to Norway.

Beginning more than 1,200 years ago, the Viking Age was a time of religious change across Scandinavia. The story is long, complex yet fascinating. It's also full of questionable facts.

For example, most researchers now dismiss the depiction of the earliest Vikings as Christian-hating pagans. While they did hold pagan beliefs, the Vikings' attacks on churches had nothing to do with religion. To the Viking, churches and monasteries were simply buildings full of riches, with weak defences.

6 thoughts on “Sensational Find of Pagan Temple Remains in Norway”