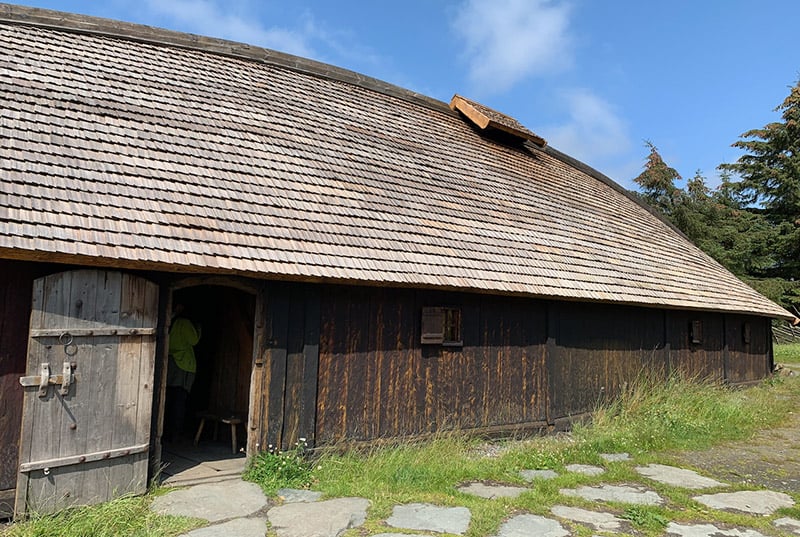 Forget the raids and battles for now. Step inside a Viking longhouse to understand what everyday life was really like.

You might have the impression that Vikings were constantly either sailing away to find new lands to pillage and plunder or engaged in epic battles. The truth of the matter is that most of the Vikings were living a fairly mundane existence as simple farming folk.

There were few towns worthy of the name, where Vikings lived, in small town houses, and traded at the marketplace. Most Vikings, however, lived a rural life in tiny villages of half a dozen large farms. The centrepiece of the farm was the Longhouse, or Turf House.

Longhouses would vary in size based on the importance of the owner. They were around 5-7 metres (15-25 feet) wide in the middle and from 15-75 metres (50-250 feet) long. No matter the size, the basic construction was the same.

Two rows of wooden columns ran the length of the house supporting the high points of the roof. Roofs would either be wood, thatched or turf. The walls were made of either clay, wooden planks or wattle and daub.

The walls were usually built bowed giving the overall shape of a boat. Where timber was scarce, such as in Iceland, the walls would be made from turf and sod, giving rise to the Turf House.

There were rarely any windows so light would get in through vents built to let out smoke, or through the gaps in the thatching. Some longhouses would have had proper chimneys, but this was very rare.

The two rows of supporting columns served to divide the house lengthways into three. The central section served as a sort of corridor. The house would be sectioned, ether to the sides of, or including, the corridor.

Fires for cooking and heating would be lit in this corridor. Some houses had a central fire pit that served the whole house while others would have had small individual fires in each room or section. The ashes from the fires would be spread out on the packed-dirt floor to absorb moisture and smells.

Along the walls of the longhouse were wooden benches, providing structure and a place to sit or sleep. One section of the house was usually reserved for animals in winter, for homestead where there were no separate outbuildings or stables.

As there were no formal chimneys, houses could get smoky but careful design and fire placement could reduce this. Smoke could escape through the gaps in the thatching or through special vents that could be opened to let smoke escape and to let in light.

A certain brand of Scandinavian design is famous nowadays for having to build it yourself. The same was true in the Vikings’ day! But rather than visiting a store and choosing what they wanted, they visited a forest. There, they would choose and chop down a tree, forge some metal and make the whole thing from scratch!

So, as you can imagine, furniture was pretty sparse. Most of the inhabitants would have had a storage box or trunk, possibly with a rudimentary lock, to keep their few possessions such as clothing, bedding and tools. These also doubled as seats.

Each home would usually have tables for dining. These were likely collapsible and stored in the rafters and brought down for mealtimes. Beds as we know them were uncommon, though in wealthy households the owners might have one. Everyone else would sleep on the benches at the side of the house.

Bedding was mostly layers of animal hides such as sheepskin and some would have had pillows filled with chicken or duck feathers. Very wealthy families might have been able to afford cotton or silk sheets from overseas traders but this would have been rare.

Most longhouses would have had a loom of some kind for weaving clothing and rugs. Wealthy families might also adorn their walls with tapestries and rugs.

Let there be light

As you might imagine, a house with no windows could be very dim. On the contrary, many reconstructions have shown that if you place a couple of smoke holes in the right place, you can let in enough light to work by.

Likewise, some homes had a gap between the walls and the roof that were covered in animal skins that could be rolled up to let in more light. Once the sun went down, the Vikings would normally eat, and tell tales around the fire so the need for light in the evenings was quite low.

Fires would also provide some light and, in the cold Northern climate, these would likely be lit for most of the time throughout the year. Lamps made from pots with simple reed wicks to burn cod liver oil, or if available seal or whale oil, were pretty common and these provide surprising amounts of light.

Candles were not unheard of but would have been uncommon in longhouses due to their expense. At the time, most mentions in the sagas were of priests who used them in their services. Affluent households may have opted for candles but, as it was much cheaper, they’d likely just use oil.

Life in a Viking longhouse

Each longhouse would contain a number of families – or a large extended family – living together in close quarters. The agricultural lifestyle meant early nights and early mornings. The younger, fit, working-age Vikings would be up when the cock crowed to start tending the animals and working the land.

The elders who were no longer able to work the land would work inside doing whatever they could. The children would help also and the whole house would have been a hive of activity. The longhouses would have been busy, noisy places.

With large numbers of people living under one roof, and animals living there too, finding peace and quiet would have been impossible. There would have been almost no privacy in the longhouse either. Everyone cooked, ate, worked and slept all together in close quarters so everyone would have known everything about everyone.

Outside of the growing season, there was still plenty of work to be done. The animals still needed tending and the house would need repairing to get it ready to survive the harsh winter months. With nothing but yourself, your skills and whatever natural resources were available, it’s full-time work just keeping the household running!

One of the obvious problems with houses made from wood and earth is that they rot away rather nicely. All that’s left of the wooden structure is a dark stain in the soil where the columns and planks would have been.

Some archaeologists have found evidence that, just as Vikings were cremated, so their houses were cremated too, with burial mounds placed on top. There are theories that the Vikings had a belief in a connection between the human body and the houses they lived in, so it’s a natural extension that they would wish to see the house given a formal send off.

As such, remains of the structure and the like are rare. Instead, we have many sites where all that remains are stone hearths, with weapons and tools. The longhouses we have today are the best reconstructions we can make from the information in the sagas and from what we know of the natural resources they could have accessed.

Tales from the Norse sagas

A lot of what we know about longhouses comes from the Icelandic sagas and eddas. These were written down after the fact as, for most early Norwegian history, events were passed down as stories rather than written down.

From the Grettis saga we find out a few things. When Grettir was out fighting off some other Vikings, his wife lit a light that was visible so that he could find his way back home. We also find that on one occasion, the house was so dim that when Auðun entered, he could see and Grettir could surprise him by tripping him.

One other tale from that sage illustrates the lack of privacy. One night Grettir was swimming from his hideaway to Reykir. He arrived after everyone was asleep, bathed in a hot pool and went to sleep naked. During the night his bed clothes fell off and in the morning he was found by the owner’s daughter and a servant-woman.

The servant apparently remarked “Grettir the Strong is lying here, naked. He's big-framed, all right, but I'm astonished at how poorly endowed he is between his legs. It's not in proportion.” and the two commented and laughed at Grettir until he awoke.

There are a number of great examples of reconstructions that people can visit to get a sense of Viking life. The Lofotr Vikking Museum in Lofoten has a reconstruction of a chieftain’s longhouse that stands over 80 metres long. There’s also a blacksmith’s forge and various other Viking reconstructions.

Elsewhere in Norway, the Avaldsnes Viking Village has several reconstructions. Actors play out the roles of a family while you are guided around the farm.

Denmark also has a number of reconstructed Viking longhouse structures. Trelleborg has a nicely reconstructed longhouse and Hobro has the ring castle Frykat, which is either a Longhouse or a Mead Hall.

Iceland and Greenland also have a number of good examples of longhouses or turf houses. Eiríksstaðir was the home of Eiríkr Þorvaldsson also known was Eric the Red. Eric was the father of Leif Erikson, the likely first European discoverer of the Americas. The Turf house at Eiríksstaðir has been reconstructed and a museum established nearby.

Also related to Leif Erikson there’s L’Anse aux Meadows where archaeologists have discovered evidence of eight buildings that may have been the Vinland settlement that Leif Erikson established on his initial landing in North America.

The discovered remains are on display and a model of the settlement shows how the various buildings were arranged.

Have you visited any of the reconstructed longhouses? Let us know in the comments.

15 thoughts on “Viking Longhouses: A Glimpse of Everyday Viking Life”