The three Storegga slides were among the largest ever known submarine landslides. They caused massive tsunamis that permanently changed the map of Northern Europe.

When talking of tsunamis in and around Norway, many people know of the Tafjord tsunami. The 1934 incident provided the inspiration for the movie The Wave, which is itself based on a genuine risk in the Geirangerfjord.

But if we look back in time a few thousand years, a far greater wave struck the coast of Norway and the United Kingdom. It was caused by a series of underwater landslides known collectively as the Storegga Slide.

Unlike the devastating Indian Ocean tsunami of 2004, there were no cameras to record the incident. Only 8,000 years later have we found the evidence on the landscape that geologists, palaeontologists and archaeologists have been able to interpret.

It's hard to comprehend what it must have been like. The sight of a seven-storey high wall of water racing towards land at more than 100kph must have been truly terrifying.

“The loss of stores, infrastructure, and tools must have caused serious problems. Many survivors may have succumbed during the first winter,” explained Knut Rydgren and Stein Bondevik, the authors of a 2014 study.

Where did the incident occur?

In total, the slides are estimated to have involved a length of shelf up to 290km. The total volume of debris is estimated at 3,500 km3. The resulting tsunamis impacted the entire North Atlantic Ocean.

What caused the Storegga Slide?

As it happened so long ago, no-one is 100% sure what triggered the event. But there are two leading theories.

Firstly, an earthquake could have triggered a catastrophic expansion of methane clathrate. Catastrophic, because just one cubic metre of clathrate can expand to 164 cubic metres of methane.

A different theory suggests that melting glaciers from Norway carried so much sediment to the edge of the Norwegian continental shelf. Something then triggered this sediment to collapse into the deeper sea.

The impact on coastal communities

A new research project aims to shed new light on the impact of the disaster.

Funded by the Research Council of Norway, LAST will examine how coastal communities in the Old Stone Age were built up, how people interacted and what happened to society after the disaster.

“A tsunami is a disaster in as much as it entails large-scale loss of lives, property and livelihood, but it is also a social phenomenon interrupting historical contingency,” explains the project website.

“As a disruptive event, we will examine whether the tsunami was an accelerator for social processes driving societies in new directions, opening social systems up to change, or transforming social order.”

Could the Storegga slide happen again?

In short, yes, there is a theoretical possibility. Of course, without knowing the precise cause it is difficult to say when, where, or how likely such an event would be.

Norway considers tsunami risk in its national disaster planning strategy, so the risk of such an event is taken into account in planning decisions.

One example is the Ormen Lange gas field. It's located on the Norwegian continental shelf approximately 120km northwest of Kristiansund in Møre. During the planning process, the risk of a Storegga-like event was deemed ‘negligible'. 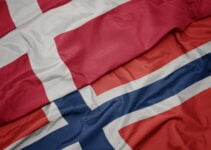