Today is Ascension Day, a Public Holiday in Norway, so I am still in bed at 8.49am with a coffee, writing my blog instead of being at work, huzzah!

I am also not required to work tomorrow as it's classed as a bridging day (extra day off between a public holiday and a weekend), meaning it's a four day weekend for me. That'll make up nicely for how annoying it was to be at work on Monday when everyone in the UK was having fun!

Yesterday I finished up a little early at work and met Kathrine, her brother Andreas, and two of their friends at a nice outdoor cafe on Dronningens gate called Bacchus. I had coffee, a burger and a beer. YUM-A TRON!

We then walked up to Kubaparken where there was a beer festival, but at 180kr entry (albeit with quite a lot of beer included!) it was above my current tight budget so I jumped on a bus home. 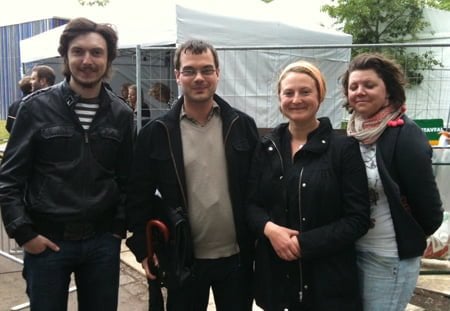 Yesterday marked the end of my first month in Oslo. It's flown by, yet it also feels like I've been here so much longer.

In just one month I've established myself at work, found an apartment, made a few friends, learned a little (and I stress, a little!) Norwegian, got to grips with getting around Oslo, and finally completed all the boring bureaucratic stuff like registering with the police and opening a bank account. Now it feels like my adventure can truly begin!

Sometimes I still blink my eyes in disbelief that I have moved to Scandinavia, something many people want to do but few actually manage. I feel privileged and lucky to be living in this wonderful country and I want to make the most of my time here, whether that's a few months or a few years.

In other news, this Saturday there's MusikkFest Oslo, a free multi-venue music festival around the city. I might pop down for a while and listen to some jangley guitars, rhythmic drumming and kazoos. Or something.