Skip to content
Home » Explore Norway » Things To Do In Molde 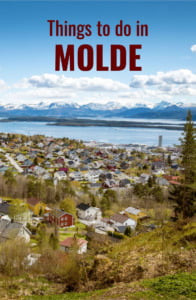 Molde is a small coastal town in Romsdal on the west coast of Norway. Here’s how best to spend your time there.

There are many large villages and small towns along the western coastline of Norway. Many are today regional centres, built on a history of fishing and trading.

Molde is a prime example. This functional town of 26,000 people is an important urban area for Romsdal. It’s not exactly a tourism hotspot, but some people choose to include an overnight stay on a fjord road trip itinerary.

It’s well located for people heading to the Atlantic Road or into the Rauma valley. Many people, including me, have also visited Molde for football games.

Finally, the town is also a port stop for the Norwegian coastal voyage, so some curious passengers may want to explore. Whatever your reason for visiting the town, here are some suggested things to do:

A short (uphill!) walk from the city centre brings you to the Romsdal museum. This is part open-air museum and part indoor exhibition. The indoor rexhibition is housed in a striking modern building and documents the history of Romsdal.

Expect old fishing boats, the local bunad, portrayals of coastal life over the years and photographs showing the bombing of Molde during World War II among other things.

Outside, the attractive town street ‘Bygata’ shows typical Molde houses from the pre-war period next to a quiet park.

While you’re in the area, take a few minutes to walk to the old Molde football ground. It’s still in use today, although the city’s main football team have a smart purpose-built football ground down by the waterfront.

A hike to Varden is popular with visitors and locals alike. From the top at 402 metres above sea level, hikers are rewarded with a panoramic view of Molde and the hundreds of mountain peaks across the water.

As with other Norwegian football grounds, there’s not much to do in advance of the game. On matchdays, home fans gather before the game for a beer (or several) in Sportspuben 1911 on Storgata.

It’s hard to miss the cathedral and bell tower at the heart of Molde. Consecrated in 1957, it’s a double-nave long church in a Gothic style. The 50-metre-high freestanding bell tower is topped with a copper clad pyramid.

While opening hours are limited, it’s worth taking a look inside if you can. The interior is richly-decorated and has impressive stained glass. It’s the third church to be built on the site after the first two fell victim to fire.

Last but not least, there’s other things to see in Molde but none of them really deserving of a listing on their own. However, everything can be seen on a walk around this compact city.

Start out by Aker Stadion, where a coastal path provides nice views across the water and along the city waterfront. As you walk through the city, watch out the cultural centre Plassen. In the summer, roses bloom on the town hall roof.

Organisers of this well-known festival claim it to be the longest running jazz festival in the world. Known as Moldejazz, the festival features more than 100 concerts over a week in July.

More than 60,000 people visit Molde during the festival week, almost three times as many as the town's population! The festival also puts on one-off concerts throughout the year.

Where to stay in Molde

On my previous visits to Molde I’ve stayed in the city’s two Scandic hotels. The iconic Seilet hotel has an eye-catching design but prices are often quite a bit higher than the nearby Scandic Alexandra.

Rebuilt after it was destroyed during World War II, the Alexandra is a little dated but the rooms are a good size and the breakfast buffet is excellent. 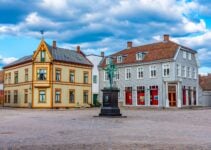 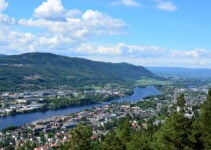