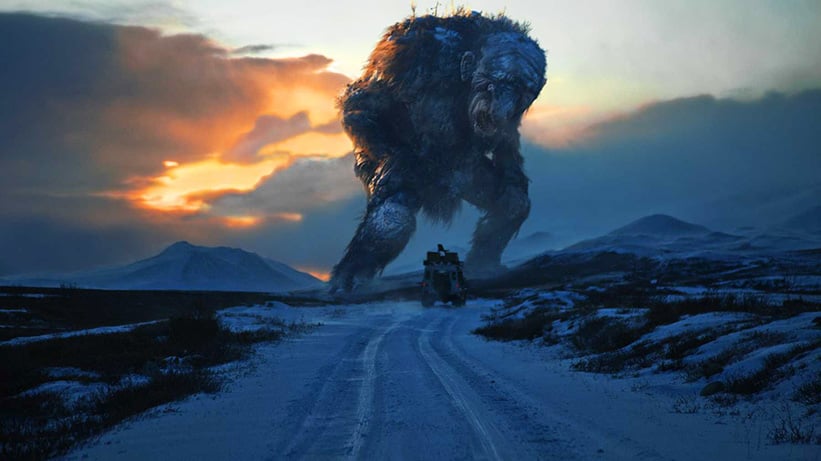 Trollhunter movie review: The 2010 Norwegian dark fantasy film is a found-footage film by a group of young people who encounter Norway's only troll hunter.

OK, so despite its documentary style, Trollhunter (released in Norway as Trolljegeren) isn’t actually a documentary! But that doesn’t mean we can’t learn a few things about Norway’s best-loved mythical beings from the film. Join me as I take a close look at a surprisingly fun film.

While I’ve avoided too many spoilers, they’re inevitable in a piece like this. If you want to watch the film – and you really should if you get the chance – fresh and unspoilt then stop reading now. Otherwise, if you’ve seen it, or don’t care for a few minor spoilers then read on!

The plot of Trollhunter

The film opens with a screen claiming that what you are about to see has been put together from footage provided anonymously:

This film is a rough-cut version of that material. Everything is shown in chronological order and no images have been manipulated.

A team of investigators spent more than a year trying to establish whether this was a practical joke or if the material was authentic.

They concluded it was authentic.”

The film opens with three young people – Thomas, Johanna and Kalle – driving along a rainy road in Norway. A radio story tells us that bear tracks have been found in the woods and hunters expect to find the bear quickly, but they’re concerned about a poacher that has been following them.

We soon find out that the occupants of the car are student filmmakers who are interested in the story of the bear. They interview some of the licensed hunters who, again, express their worries about ‘the guy in the Land Rover’ who is ‘nothing but a poacher’.

Our students eventually track down the poacher, whose name is Hans, and attempt to ask him questions only to have the door of his caravan shut in their faces. Undeterred by his gruff manner, and the massive scratch marks in his Land Rover, they keep following him until they ambush him on a ferry. He again refuses to talk.

Still not taking the hint, our students then pursue him on one of his hunts. They enter the woods where they saw him go and see a series of bright flashes in the sky, then Hans comes running out and shouts ‘TROLL!’ and leads them to safety. 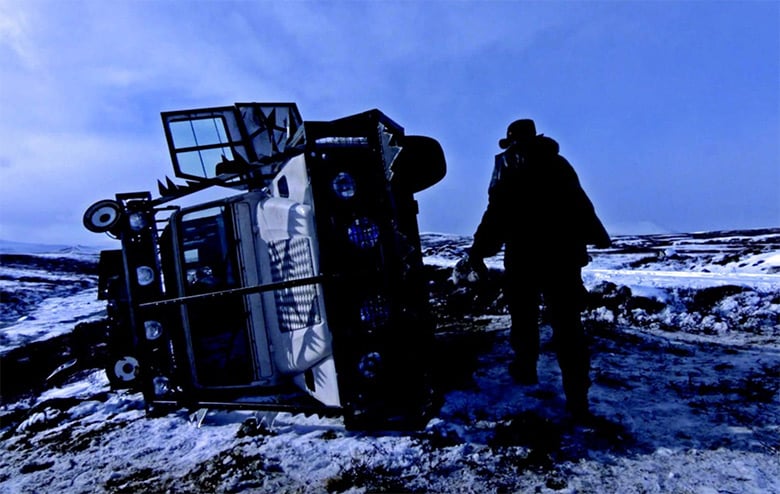 Hans, as you might expect from the title, turns out to be a troll hunter – as we later discover, the only one in Norway. His job is to ensure any trolls that leave their territories and start encroaching on humans are dealt with. He agrees to let the team film him work, so long as they do EXACTLY what he says.

Obviously, our filmmakers are still slightly sceptical because, well, trolls don’t exist, right? It’s not until they’re chased by a large three-headed troll, which the hunter eventually turns to stone with UV light, that they’re finally convinced. Their response to the realisation is jubilant as they understand they have world-changing footage to share.

The next troll they encounter explodes rather than turning to stone and after that we get a pseudo-scientific explanation from a vet about why light is dangerous to trolls and why some turn to stone and some explode.

From there they encounter more trolls, and a question about Christianity that they’d been asked earlier in the film returns to haunt them. Eventually, as you might imagine, through tragedy and thrilling action, they finish with a major triumph over a large foe.

To be honest, if you’ve ever seen any horror type film in the past then you know roughly what’s going to happen – that’s true of most movies you see. The joy, however, is in the journey and the journey in this film is one I found rather enjoyable.

The trolls are well realised. They’re slightly cartoonish in appearance but this doesn’t make them any less threatening when they’re bearing down on our protagonists and uprooting trees. Overall, they fit in well with the style of the film.

Any film where the central idea consists of ‘this thing that you think doesn’t exist actually does exist’ can have a lot of fun with that idea. The film contains quite a few references, both overt and subtle, to the myths of the trolls. 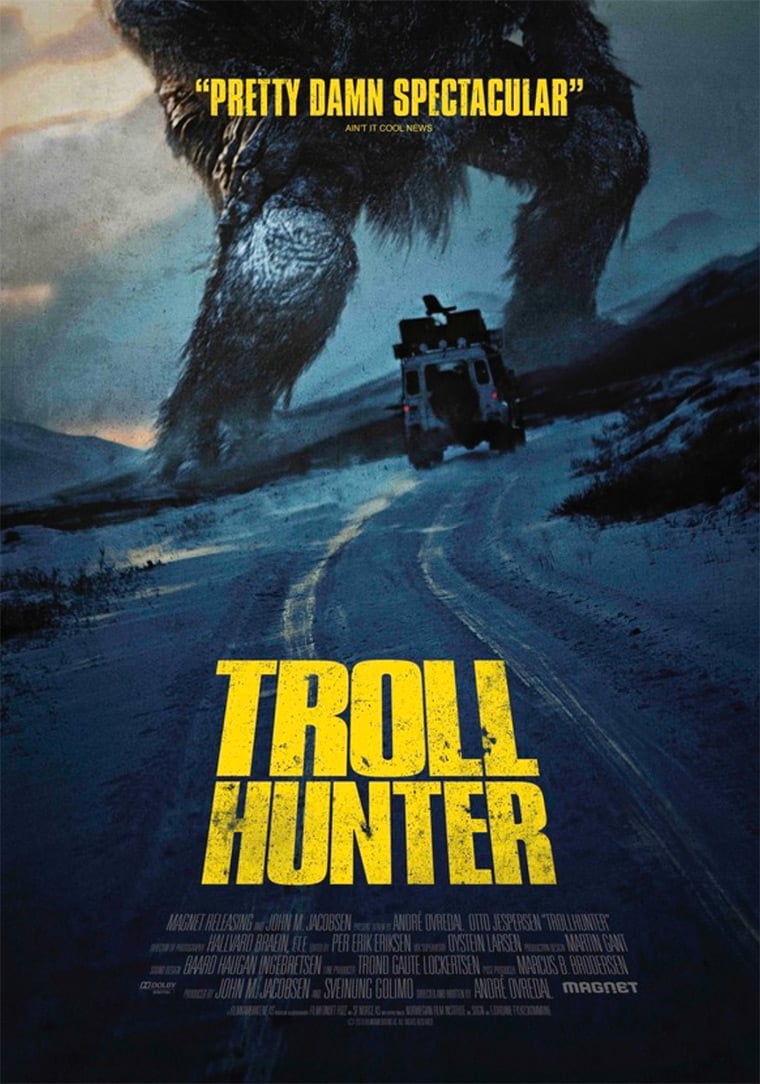 Firstly, at a guess, the troll hunter’s name Hans could well be a reference to Hans Christian Andersen, Scandinavia’s most famous writer of fairytales. I may be stretching here but it’s certainly possible.

Onto the myths themselves and we have explicit reference to the story of The Boy Who Had an Eating Match with a Troll when Thomas asks Hans ‘what you do you when you have to have an eating competition?’ Hans replies, deadpan, ‘Fairy tales don’t usually match reality’!

Some things that do match between what we know from myths and the reality that the film creates include trolls turning to stone when exposed to sunlight. There’s also the ability of trolls to smell the blood of a Christian man, as mentioned in Asbjørnsen and Moe in Soria Moria Castle.

Another scene that’s likely a nod to the fairy tales is the scene on the bridge, when Hans attempts to lure a troll with three goats. This is a clear reference to the Three Billy Goats Gruff, where the goats have to cross a bridge that has a fearsome troll living underneath.

Is it a horror movie?

A lot of people will look at the film and think ‘this is not really horror’. I can sympathise with that view as it’s certainly not a full-on horror film. Instead, it’s a mixture of different elements that combine to create a piece that’s much better than it would have been if it had just been any one of them.

First you have the mockumentary style of film. Giving an illusion of reality, this style has perhaps been overused in recent years, but it works very well here. The style breaks in a couple of places where we get a few establishing shots that are clearly taken from places where the student film crew wouldn’t have been. It’s slightly jarring but it’s not enough to completely destroy the realism, any more than the trolls are!

After that, it’s horror-ish. The scenes with the trolls create tension that feels as real as any other horror film. In one scene, the filmmakers and Hans are trapped by a group of Mountain Kings, with real peril that leads up the film’s main tragic moment.

Above all, however, the film is a comedy. It’s not the side-splitting, laugh-out-loud humour of most comedy films. Instead, it’s a very subtle, dry humour that’s quite typical of Norwegians. To me it’s similar to something like The Office, where the comedy comes from the absurdity of the situation and some of the characters involved.

Most of the actors playing roles in the film are well-known comedians in Norway. Many of the film’s targets are Norway itself and there’s a definite undercurrent of satire running through. 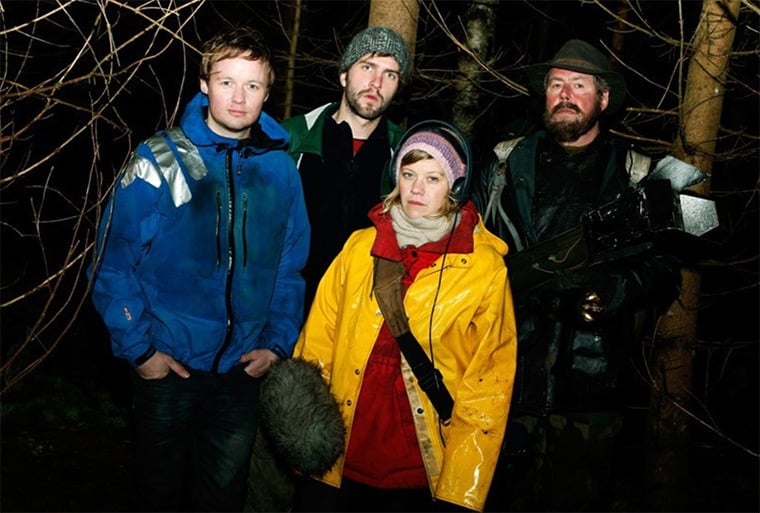 The film pokes a lot of fun at Norway and the stereotypes of its people and government. One of the best for me was almost a blink and you miss it moment where Thomas is in a gift shop and he briefly picks up a troll figurine, raises his eyebrows, smirks and sets it back down again. Anyone who has been to Norway will have noticed that troll-related merchandise is big business!

One of the first things we see is a collection of licensed bear hunters who know that Hans is not one of them ‘cos they all know every other hunter in the country. This is a way of satirising the fact that in Norway, while wild animals attacking livestock is a problem for farmers, it can be very difficult to deal with them due to all of the wildlife regulations.

The bureaucracy evident in many aspects of Norwegian life are brought to life in the character of Finn Hauge, an officious but toothless man who’s trying to keep a lid on the existence of trolls in Norway. It’s his job to set up explanations for any troll attacks by planting dead bears and walking round with fake bear feet to create paw prints!

Another target for the film is immigrants, who are lampooned through the Polish immigrant who finds bears for Finn Hauge. He is portrayed as only speaking in broken English and being very happy to do whatever the government asks of him without asking any questions.

Finally, we have the question of powerlines, which are often a source of conflict between a need for electricity and a desire to protect the environment. The scene with the power station boss is, for me, one of the best in the film.

Hans explains to Thomas that the power pylons are actually a sort of ‘electric fence for trolls’ and as one has obviously escaped, they head to the power station to investigate.

Thomas asks the boss whether he thinks it strange that the power lines circle right back to the power station without going anywhere that needs power and the boss replies ‘Well it does lead in a circle. And in a beautiful landscape.’

Is this Norway’s ‘Blair Witch Project'?

In 1999, a film called The Blair Witch Project opened with the following words:

“In October of 1994, three student filmmakers disappeared in the woods near Burkittsville, Maryland while shooting a documentary.

A year later their footage was found.”

While it wasn’t the first ‘found footage’ film, it was the one that catapulted the genre high into the public consciousness and is the one that everything else is compared to. The comparison between Blair Witch and Trollhunter isn’t all that easy to make.

Being a comedy, Trollhunter loses much of the dramatic tension that makes Blair Witch what it is. Instead, the film seeks not to use some ‘unknown evil spirit’ but creatures of Norway’s mythical past. Whereas the Blair Witch Project, at least at the time, created a new kind of horror in viewers, 11 years later, that wouldn’t have been enough to carry a film such as Trollhunter.

Many found footage experiments since 1999 have tried to retread the same path but the most successful have tried to do something slightly different with the idea. This is what Trollhunter does here and whilst it worked for me, it’s up to viewers to decide whether it worked for them!

Have you seen Trollhunter? Or does this make you want to check it out? Let us know in the comments!