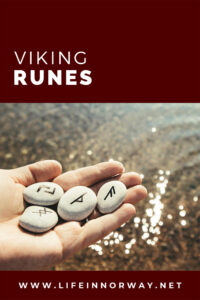 Viking runes were not for everyday use. The Northmen's history was told orally, and runes used only to record moments of great importance. Let's dive deep into the fascinating world of the Viking alphabet.

We’ve talked before about the many remaining runestones of Scandinavia. These magnificent monoliths with intricate imagery litter the landscape of Scandinavia. But how much do we know about what they say?

Let’s continue our look at Viking history and take a deep dive into the runic alphabets.

The exact origins of the runes used by the Germanic people of Northern Europe in the first millennium of the Common Era are up for debate. The characters share similarities with various other writing systems yet none of them match up precisely enough to form a definitive ‘yep, this is it’ for the scholars.

The runes clearly developed from the old Italic scripts used on the Italian peninsula in ancient times, which in turn came from the Greek alphabet.

It’s possible that they came from the Etruscan alphabet, which went on to become the Latin alphabet that English and most Western languages use to some extent today.

How we get from Italy to Scandinavia is also up for discussion! As the runes first appear in Denmark and Northern Germany, there are two hypotheses for how they got there.

We often see the rune systems referred to as ‘runic alphabets’, which is a perfectly acceptable term for most people.

But alphabet comes from ‘alpha beta’ or ‘aleph beth’ the two first letters in the Greek and Hebrew alphabets. The runes don’t start with A and B, they start with F and U, which could lead to some interesting problems!

Instead, scholars refer to the Scandinavian runic systems as a Futhark or Fuþark after the first 6 letters: F, U, Th/Þ, A, R and K. If you’ve ever wondered where the letter Þ (known as thorn) comes from, it’s from the runes.

You’ll regularly encounter it throughout old Norse and Anglo-Saxon literature. It was dropped from the Scandinavian and English languages in favour of ‘th’ but it lives on in Icelandic.

The name rune comes from the Germanic root run- meaning secret or whisper. The word has similar meanings in celtic language although in others it refers to cutting with a knife, speech or miracle. It’s likely that the word does indeed refer to ‘secrets’ as in the beginning, runes were developed by and known only to the elite.

The mystical quality of runes is often cited but is rarely borne out by actual findings. What we do know is that runic inscriptions were typically reserved to remember moments or people of great importance. In the Viking Age, this was no everyday alphabet.

In terms of Viking runes in Scandinavia and elsewhere, there isn’t just one single set. Instead the systems continued to develop. We consider three different Futharks as covering the period: Elder Futhark and Younger Futhark.

There’s also Anglo-Saxon Futhorc which is a development of the Germanic tribes that migrated towards England during the period. It’s called a Futhorc to reflect the changes in sound that happened during this period.

Younger Futhark developed into the medieval runes that followed the Viking Age. These are considered a response to the growth of the Latin alphabet, which was resisted by many at the time.

The medieval runes are probably the runes that people recognise best. There was further development in the 16th century into the dalecarlian runes or dalrunes that were in use in the Swedish province of Dalarna right up until the 20thcentury. For this reason. Dalarna is known as the ‘last stronghold of Germanic script’.

Elder Futhark runes (until around 800CE)

The Viking period kicked off with Norse still using the Elder Futhark, which is the one that most closely resembles the Italic scripts that it came from. There’s also evidence that the travel was not a one-way thing. The 4th century Gothic alphabet, derived by the Greeks to translate the bible, contains two characters than can only have come from runes.

The Futhark consists of 24 runes. Each rune likely had a name, chosen to represent the sound of the rune itself. The names of the runes are preserved in the Old English Rune Poem, which contains stanzas about each character along with 5 from the Anglo-Saxon Futhorc.

The runes were usually arranged into groups of 8, known as an ætt or the ættir. In Elder Futhark we have:

Several of the runes show no variation from the Italic alphabets and how the developed into the Latin alphabet.

The rest of the letters may be either innovations or adaptations of unneeded Latin letters.

The earliest known sequential listing of the Futhark dates from 400CE and is found in Gotland on the Kylver Stone.

The invention of Elder Futhark has been ascribed to a single person or small group. These were likely mercenaries in the Roman Army or merchants who traded in the region. Opinions are divided on the original purpose but most of the early examples suggest that the idea was an artificial imitation of the roman scripts intended to be playful rather than a serious attempt at scripture.

The most important development of runes as far as Vikings were concerned is the Younger Futhark. Oddly, as most other writing systems were expanding at the time, The Younger Futhark is actually a simplified and condensed system, consisting of only 16 characters. This is despite the fact that the number of phonemes, or sounds, in the language was growing!

In contrast to the Elder Futhark, which was known to and used by an elite, the Younger Futhark spread throughout the wider population of the region. This is evidenced by the fact that there are vastly more examples of Younger Futhark that have been found and several of them are of a more trivial, almost casual nature.

The second ætt lost the letters æ and p to become h, n, i, j, z and s. The j sound became an a sound and the z moved position.

At the end of the Viking Age, with the Christianisation of Scandinavia, the Latin alphabet was mostly adopted in the region. But that’s not the end of the story for runes. Many people were determined to hang on to Old Norse and the runic systems that they comprised.

The first development was the addition of dots. Rather than create new runes for the phenomes that were missing, they simply took the existing runes and added dots to make new ones. This is similar in concept to accents in foreign languages. The e rune is simply an i rune with a dot.

Even though the medieval runes were ‘competing’ with the latin alphabet used by the Christian Church, we still have many examples of biblical inscriptions done in runes. Farmers, too, would continue to use runes for marking goods and communicating for many years.

Finally, the runes died out but, as mentioned above, they were in active use until the end of the 20th century.

We know a lot about the runes and how they transliterate to modern characters. Rather more difficult is working out precisely what they meant.

As the Younger Futhark was condensed, so each character could stand for multiple sounds. If you don’t necessarily have the context then it’s impossible to know for sure which of the sounds was meant. For example, the i rune was used for e and I so a word like pick could mean pick or peck.

One other problem is that, as runes became obsolete – the language developed away from certain sounds towards others – so the runes would often simply be reused for a different sound. So, you could end up with a system where, for example, KAT could mean cat or hat or bat depending on when it was written and whether the writer had updated knowledge of the new sounds.

With some runestones it’s easy to tell the context and the translation is relatively straightforward. With others, we will never know exactly what they mean and all we can make is a best guess.

The use of Viking runes today

It’s a sad fact that several of the runes have been co-opted by the far-right, in particular neo-nazis. The most noticeable is the Sowilo rune, which doubled up to become the symbol of the SS. The Eihwaz, Algiz, Othala and Hagal runes also had specific meanings in Nazi Germany. Runes from the Younger Futhark were developed into the Armanen runes by Guido von List

Many of these runes are still used today as subtle symbols of support for far-right and neo-nazi ideology that can be worn as pendants and tattoos without drawing attention. Everyone recognises a Swastika but only people in the know are likely to understand the meaning of, for example, the Othala rune.

Groups of role-players and Viking or runic enthusiasts are actively involved in trying to reclaim the runes from these groups. Clearly, they want to be able to wear and use runes without the negative connotations.

Runes also appear in Tolkien’s The Hobbit as map markers, to emphasise their connection to the dwarves. They also appeared in early drafts of The Lord of the Rings, before being replaced by Tolkien’s own rune-like Cirth script.

The Bluetooth logo, used on millions of electronic devices worldwide, is a combination of the hagall and bjarkan runes. These correspond to the letters H and B, which are the initials of Harald Blåtan, also known as Harald Gormsson with the nickname Bluetooth. Harald was a king of Denmark and Norway in the Viking age.