Viking Stadium in Stavanger has been the home to Viking football since it opened in 2004. Here is everything you need to know if you’re planning to visit the stadium.

We hear from plenty of non-Norwegian football fans interested in watching a football match in Norway. If you're living in Norway or travelling from the UK, Stavanger is a convenient place to catch a game.

Stavanger’s Viking FK play their home games on the banks of Gandsfjorden at the Viking Stadion. For sponsorship reasons, it is currently known as the SR-Bank Arena. It’s a cosy little venue with its own unique atmosphere.

The 16,300-capacity stadium is located in the Jåttåvågen area of Stavanger. It took just one year to build and opened in May 2004. The total construction costs were in the region of NOK 160 million.

The stadium is fully enclosed and covered on all sides. It has two big television screens that relay certain match events to the fans during matches.

In the stand to the right of the main stand, you will find VikingHordene (The Viking Hordes), the club’s most vocal and boisterous fans. This group of enthusiastic fans can really liven up the stadium on a cold and wet November night.

How to get to the stadium

One of the best things about Stavanger is its accessibility as a travel destination. The city’s airport is located in Sola, which is just 15km away from the main centre.

Read more: The most impressive football stadiums in Norway

From the city centre it's easy enough to catch the train to the stadium in Jåttåvågen. It costs as little as 37 kroner one-way and is a short journey that takes just seven minutes. Enjoy the scenic fjord views on the way!

The train station in Jåttåvågen is located right next to the stadium, which is ideal on a rainy day (which is frequently the case in Stavanger). 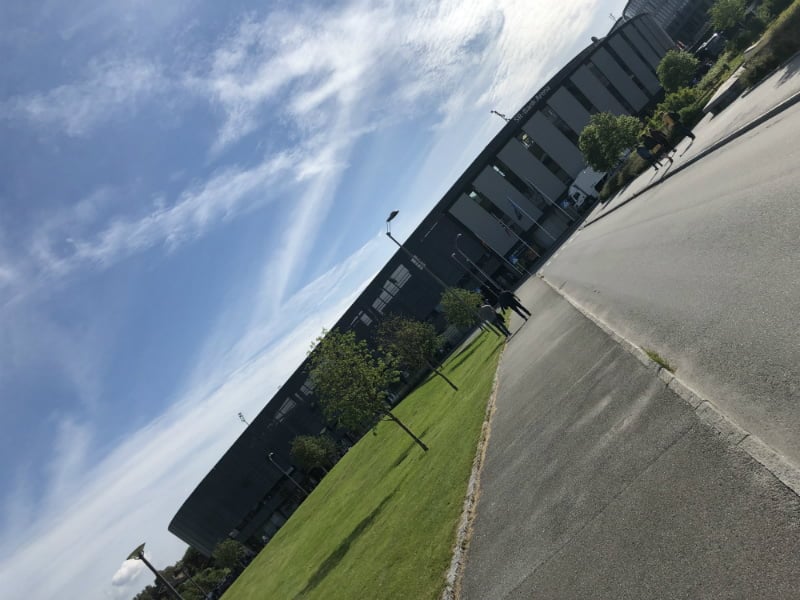 The record attendance at stadium stands at 16,600, a high achieved against west coast rivals SK Brann in June 2007. The natural grass playing surface, which had been in use since the stadium opened in 2004, was replaced with artificial turf at the start of the 2018 season.

Tickets can be bought from the club website: www.viking-fk.no in the section marked Billetter. For some games tickets can be purchased on the day of the match at the stadium. Tickets range from 100 NOK to 499 NOK. There are many affordable seating options for fans to choose from. Click on the link above for further information.

Ticket prices in Norway remain some of the most competitive in Europe, at least for a top tier league. Even national team ticket prices are affordable for all. All of this isn’t bad for a country that is often labelled as expensive and difficult to visit on a budget.

Viking’s former home, the Stavanger Stadium, was located much closer to the city centre. It had a capacity of around 17,555 and hosted many memorable Viking matches down the years. One of those special occasions was a 4-2 win over Chelsea in UEFA Cup back in 2002, a result that knocked the English club out of the competition.

After the Stadium closed in 2004, it was out of use for two years, during which time there was an extensive renovation of the ground. It was turned into a track and field venue for the city, and these days it is used as an athletics stadium in the community.

The decline in attendances

Even before Viking’s relegation to the first division at the end of the 2017 season, attendances were in decline.

After promising early figures between 2004 and 2007, average crowds at the Viking Stadium have seen a drop in all but three of their seasons since 2008.

It is difficult to pinpoint why this is the case but poor performances in the league could be one reason. The Stavanger club’s highest league finish since 2008 has been 5th place, a placing that has been achieved in three separate seasons since the aforementioned date.

Another reason, of course, has been the rise of football on tv in Norway. Not only do Norwegians love football in their own country, they also have a huge passion for European football and in particular England’s Premier League.

Because schedules often clash with domestic fixtures here in Norway, some fans choose to stay at home and watch their ‘second club’ on television rather than their local side.

In 2006, just two years after the Viking Stadium opened its gates for the first time, the decision was taken to increase the capacity from 15,300 to 16,600.

In 2009, a further plan was put forward to add a new upper tier to both the south and south east stands, increasing the capacity to 22,000. However, after a further drop in attendances, it was decided to hold off on the plans, at least until there was an increase in crowd numbers.

The last alteration to the capacity came in 2012, when 300 seats were removed to make way for new big screens. The current capacity of the stadium is 16,300.

The future is bright

Viking have won Norway’s top division on eight occasions and are officially the third-most successful club in the league’s history, behind Fredrikstad (nine) and Rosenborg (26).

The Stavanger club last won the league title in 1991. They have also won the Norwegian Cup five times and finished runners five on occasions.

Viking’s first season back in Norway’s top tier has – so far – been a success. The club are also in the quarter finals a of the Norwegian Cup, a competition they haven’t won since 2001.

Both league and cup form can only boost home attendances for the Stavanger club, which in turn can cheer the team to future success at the SR-Bank Arena.

In time, maybe the new digs would then surpass the warm memories of their old home, the Stavanger Stadium.