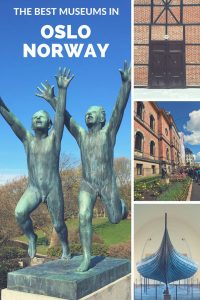 Get a dose of culture in Oslo with our list of the Norwegian capital's must-see museums.

Long gone are the days when a museum visit involved peering into dusty cabinets. The museums of today are fun, interactive experiences for all the family, and that's especially true in Oslo.

Considering the city's relatively small size by global comparisons, it's home to an astonishing number of museums that will teach you so much about Norwegian history and culture. Ready? Then let's get going!

A world in granite and bronze

The world's largest sculpture park made by a single artist, the 200 sculptures of Vigeland Park are open to the public all year round.

Most of the sculptures take human form with an element of fantasy, while the park's most famous sculpture is the 17.3m-high monolith. These photos from Vigeland Park give you an idea of what to expect.

The on-site Vigeland Museum gives a wonderful insight into how the park was put together. Opened after the second world war, the museum houses sculptures in plaster, granite, bronze, marble, works in wrought iron, thousands of drawings, woodcuts and woodcarvings.

How Norwegians used to live

Norway has many open air museums home to preserved buildings and artefacts, but the Norwegian Museum of Cultural History takes things up a notch.

More than 150 buildings and a collection of items from all across Norway are on display in the beautiful surroundings of the peninsula of Bygdøy, Oslo.

Among the museum's most notable buildings is the 13th-century Gol Stave Church, relocated here to save demolition.

The impressive wooden church is one of five medieval buildings at the museum. You can also see a farmhouse from the 14th-century, and a 1865 tenement building relocated from Oslo.

Known best for its Edvard Munch room featuring world-famous works such as The Scream and Madonna, the gallery shows off a good collection of works from French impressionists and also has a Fairy Tale room, in which the art depicts princesses, trolls and other mythical creatures.

A new National Museum will replace the gallery (and several other museums) when it opens in 2022.

Speaking of Edvard Munch, the brand new Munch museum is finally open. It’s five times the size of the former museum, providing space for more of the artist's paintings, drawings and other works than ever before.

A nation of seafarers

A near neighbour to the Museum of Cultural History, the Viking Ship Museum is an ever-popular stop for visitors to Oslo.

Unfortunately the museum is also currently closed! It will reopen in 2025 as the Museum of the Viking Age. However we'll keep this listing here for reference.

Three genuine Viking ship discoveries from across Norway are on permanent display in the purpose-built building. Two of them are in spectacular condition considering they were built in the 9th-century.

Although the ships play a starring role, the other exhibits take you on an eye-opening journey into Viking life featuring everyday objects from the farmsteads and voyages.

Staying with the ocean theme, Bygdøy is home to a further three maritime-themed museums.

Best of the bunch is the Kon-Tiki Museum that tells the story of Norwegian explorer Thor Heyerdahl's 5,000-mile journey across the Pacific Ocean on a raft. The museum houses original vessels and equipment from his expeditions.

While you’re in the mood for expeditions, explore a genuine polar vessel at the neighbouring Fram Museum. The strongest wooden ship ever built, Fram survived journeys to both polar caps. The Norwegian Maritime Museum completes the collection of museums of Bygdøy but is only worthwhile to those with a specific interest in maritime culture and history.

The Zoological Museum displays wildlife from Norway and the rest of the world. See a lifelike replica of a beaver dam, scenes from the Arctic, and exhibits about penguins in Antarctica to chimpanzees and okapi in African rainforests. There are also highlights from the Geological Museum, which is currently closed to the public. Free entry on Thursdays!

Outside the museum, the 150-acre Botanical Garden is a popular tourist destination and an important recreational area. The gardens and two greenhouses together contain 35,000 plants and 7,500 species. Entry is free.

If you are traveling with kids who love planes, trains and automobiles, the Norwegian Museum of Science & Technology is a must-do.

Although the museum tells the story of Norway’s development from agrarian to an industrial society, its all done through bright, colourful and interactive exhibits that are just plain fun. The museum stays fresh by updating its exhibits on an annual basis.

Because of its location north of the city, it’s best to combine a visit here with a walk around the nearby Sognsvann lake or along the Akerselva river.

What's your favourite museum in Oslo?

2 thoughts on “The Best Museums in Oslo”