Skip to content
Home » Explore Norway » Svalbard » When is the Best Time to Visit Svalbard? 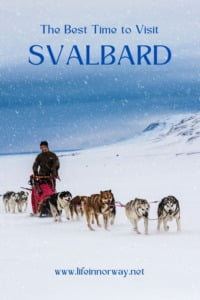 From the endless days of summer to the permanent darkness of the winter. The seasons of Svalbard explained.

Norway’s Arctic archipelago is a truly fascinating place whenever you visit. Yet the experience is wildly different depending on the time of year.

The unique Arctic environment and how drastically the polar latitude impacts the daylight play a significant role in travel to Svalbard.

So, anyone planning a trip should think carefully about what they want to do while in Svalbard to help decide the best time of year to travel. You can of course visit Svalbard at any time of year. But in this article, we take a look at the three main tourist seasons.

October to February: Also known as the dark time and the northern lights season. Simply put, the polar winter is the period when the sun doesn’t rise.

While there is still some daylight (twilight) at either end of the season, expect total darkness from mid-November to the end of January. The only exception is the little light provided from the moon, and the street lights of course.

Take a look at this video (above) to give you an idea of the conditions. This was taken at 1pm (yes, really) in early December:

Things to do in the Svalbard polar winter

The northern lights are a big attraction at this time of year. That’s because the endless night increases your chances of a sighting.

Read more: Things to do in Svalbard in the Polar Winter

This means Longyearbyen is the only permanently inhabited town on earth where you can experience the aurora in the middle of the day, aside from a handful of scientific settlements.

Because of the darkness and low temperatures during the polar winter, taking a northern lights tour is advisable. Other attractions include a unique snowcat tour in and around the town.

There’s also a few indoor attractions to keep you busy when you want to warm up. Svalbard museum is a must visit while a tour and tasting at Svalbard Brewery is highly recommended for beer lovers.

March to mid-May: This relatively short period is a fantastic time to be in Svalbard. As the sun returns, you still have the opportunity to see the northern lights in the evenings (for the first few weeks) and enjoy daytime activities in the sunlight. By the end of the season, the midnight sun has arrived.

Don’t be mistaken by the lighter days though, for this is still very much the winter. There will likely be a lot of snow on the ground and temperatures can be just as low as in the polar winter. So wrap up well!

Things to do in the Svalbard white winter

Svalbard’s tourist industry kicks into gear as the season progresses, with everything from snowmobile tours to dog sled rides on offer.

It’s a great opportunity to get out of Longyearbyen and truly appreciate the remarkable Arctic landscape of this part of the world.

Photographers will particularly enjoy the earliest part of the season when “blue hour” bathes the town in a deep blue light.

Mid-May to August: Svalbard is bathed in the midnight sun during the Arctic summer, leading to endless daylight and milder temperatures. Recent years have seen record-breaking temperatures in Svalbard, but it can still be chilly.

Things to do in the Svalbard Arctic summer

The endless daylight and milder temperatures bring all manner of opportunities not available at other times of the year.

Wildlife spotting is a great example. Birds migrate to the Arctic archipelago in vast numbers to nest, drawn by the plentiful food on offer in the ocean. Walruses, seals and whales are also drawn into the fjords of Spitsbergen.

The summer is also the best time to see some of the species that call Svalbard their home year-round, including polar bears, polar foxes, Svalbard reindeer and the remarkable Svalbard rock ptarmigan.

At this time of year, boat trips are especially enjoyable. A diverse range of trips are on offer from wildlife and photography trips to pure sightseeing. Trips to the Russian settlements Barentsberg and Pyramiden are also popular.

At the end of the summer, Svalbard does enjoy a brief winter period during September. The landscape changes rapidly as the polar night draws in, plants disappear and birds fly south. The golden landscapes are beautiful, but the tourists are few and far between. 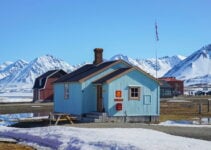