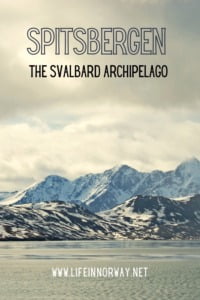 The largest island in the Svalbard archipelago, Norway’s Spitsbergen is a truly fascinating place. Here's everything you need to know.

Welcome to Spitsbergen, Norway. I’m fortunate enough to have visited Norway’s largest island not once but twice, and I’m now planning a third. Here is why this special Arctic island keeps calling me back.

Spitsbergen is often confused or used interchangeably with Svalbard, but they are different. Svalbard is the name of the whole archipelago of which Spitsbergen—the biggest island—is part.

The Norwegian archipelago Svalbard lies between the north of mainland Norway and the North Pole, experiencing endless days in summer and total darkness in winter. It’s home to the world’s northernmost permanently inhabited communities.

Spitsbergen itself is by far the largest island within the Svalbard archipelago. At 37,673 square kilometres (14,546 square miles), the island is easy to see on the west of the archipelago.

Spitsbergen is the only permanently inhabited part of Svalbard. Longyearbyen is the best-known settlement and administrative centre, home to the majority of Svalbard’s population.

That being said, more than 50% of the land is covered in ice year-round. Together with the glaciers, it is mountains and fjords that define the landscape.

Under the terms of its sovereignty (more on that later), Norway appoints a Governor to administer and police the Svalbard archipelago. The Governor’s office is based in Longyearbyen on Spitsbergen.

In addition to roughly 2,500 humans, Spitsbergen is home to a surprisingly diverse animal and bird life, including polar bears, arctic foxes, reindeer and marine mammals.

Spitsbergen officially has an Arctic climate, albeit with higher temperatures compared with other places at the same latitude. Much of the island’s delicate environment is protected by six Norwegian national parks.

There are a handful of human settlements on Spitsbergen, all on the coastline or fjords of the west coast. All were originally focused on coal mining, but tourism along with international science and research play important roles today.

None of the settlements are connected by road. Aeroplanes and helicopters are used year-round, while snowmobiles and boats are used when conditions allow.

The administrative centre of Spitsbergen is Longyearbyen. Although it’s only home to approximately 2,250 people, the town has an international airport, hospital, school, indoor swimming pool, shopping mall, several hotels, bars and restaurants, and even a craft brewery.

The other main settlements on the island include the Russian mining community Barentsburg and the international research community Ny-Ålesund.

Former important settlements include the Russian town Pyramiden and the Norwegian coal mining town Svea. Pyramiden is now largely abandoned and is an occasional tourist destination. There are remains of several other whaling and mining settlements dotted around the island.

If you’ve ever been on a cruise to Svalbard, chances are your ship will have sailed into the waters around Nordvest-Spitsbergen National Park.

One of six Norwegian national parks on Spitsbergen, the park contains glaciers, fjords, warm springs, remains of volcanoes in Bockfjorden and an important birding area. At 80 degrees north latitude, the hot springs are the northernmost known hot springs on the planet.

Polar bears are perhaps the most famous icons of Spitsbergen and Svalbard. It’s hard to pinpoint an exact number as they move around over large areas throughout the year. They occasionally visit human settlements in search of food.

Other marine mammals in Spitsbergen include whales, seals, walruses and dolphins, while Arctic char can be found in freshwater lakes.

Just three terrestrial species inhabit Spitsbergen: the Arctic fox, Svalbard reindeer and the accidentally introduced southern vole. There have been failed attempts to introduce the Arctic hare and musk ox.

Huskies are important companions for humans on Spitsbergen. They are also somewhat of a tourist attraction, with husky-pulled sled rides a popular activity.

The history of Svalbard is a long and fascinating one. In 1596, Willem Barentsz made the first documented discovery of Spitsbergen island while in search of the Northern Sea Route. It’s possible Russian hunters found the island even earlier.

Whaling activity began in the early 17th century. The Danish-Norwegian crown, the Dutch and the English were all early visitors and all laid claim to the territory.

Nominally ruled by the Scandinavian countries, Spitsbergen became a rich source of fishing and whaling waters for vessels from many nations during the 18th and 19th centuries. Many Arctic explorers used the island as a base, including the Norwegian explorer Roald Amundsen.

Whalers knew coal was available on Spitsbergen, but commercial operations didn’t begin until 1899. Several newly-established companies quickly moved in to take advantage of the new opportunities.

In 1920, the Svalbard Treaty finally settled the issue of sovereignty. Originally signed by 9 parties and since expanded to 40, the treaty recognised the sovereignty of Norway while giving the right of residence and economic activity to citizens of any signatory.

In August 1996, Vnukovo Airlines Flight 2801 crashed near Longyearbyen. All 141 people on board died.

How to visit Spitsbergen

With incredible untouched Arctic landscape and fascinating wildlife, Spitsbergen is a popular tourist attraction among outdoor enthusiasts. There are only two realistic ways for foreign tourists to visit the island.

The first is flying via Norway. Regular flights serve Longyearbyen from Oslo and Tromsø. This means that although citizens of many countries can visit Svalbard, you may still require the right to visit Norway in order to reach Spitsbergen.

From Longyearbyen, you can participate in various tours and experiences—including visiting other settlements—depending on the season.

Read more: When is the Best Time to Visit Svalbard?

The second method is via cruise or expedition ship. Several different options exist although the activities of large cruise ships in the waters of Spitsbergen are limited.

Specially-equipped expedition ships are the better choice. Most offer daily excursions via small inflatable vessels, allowing passengers to get a much greater appreciation of the landscapes and wildlife of Spitsbergen.

Many cruises start in Longyearbyen (requiring a flight anyway) although some leave from Norway or even the British Isles.

Have you been to Spitsbergen island? What is your favourite thing to do in the Svalbard archipelago? Let us know in the comments.

3 thoughts on “Spitsbergen: A Complete Guide to the Arctic Wilderness of Svalbard”