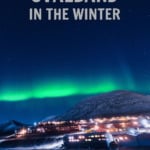 Svalbard is an Arctic archipelago halfway between the north of mainland Norway and the North Pole. The islands are home to the world’s northernmost permanently inhabited communities of humans—and plenty of polar bears.

Many people consider visiting Svalbard in the summer. The permanent daylight is a big attraction as it means you can truly make the most of your days. Springtime is also popular, when the light has returned but snow and ice remains.

However, far fewer choose to visit in the early winter months during the long polar nights. A handful of people do, and of course there's all the people that live there. So, what's Svalbard in the winter like? Let's take a look…

Longyearbyen in the winter

From late October to mid-February the sun stays below the horizon. From mid-November to the end of January, the islands’ biggest community Longyearbyen is in complete darkness aside from moonlight.

Curious about what that is like? So was I! So in December 2021, I packed by bags and headed north for the second time. Check out this video, filmed at 1pm to see just how dark it is in the daytime:

Can you imagine living in those conditions, day by day for weeks at a time? Many people do. Many people also choose to visit at this time of year. Not just me!

Things to do in Svalbard in the winter

For most people, winter tourism is usually based around ski resorts or winter sun destinations. Few people would consider traveling to the extreme northern latitudes where the sun doesn’t rise for months.

While the lack of daylight does limit the activities on offer, it’s a truly fascinating time to visit. Of course, when the daylight returns from February onwards, the later winter months offer different activities.

Svalbard is so far north that the optimum place to see the northern lights is actually a little farther south!

But because of the relatively low levels of artificial light and 24-hour darkness in November, December and January, the archipelago often has ideal conditions to see a display.

As with anywhere, the unpredictable nature of solar weather (which causes the aurora) and cloud cover means a display can never be guaranteed.

All this being said, I wouldn't actually recommend going all the way to Svalbard just to see the lights. It would be easier and cheaper for most people to try their luck in Tromsø.

Get to know the locals

Many tourists visiting Svalbard wonder out loud what kind of people choose to live in such a remote place in extreme conditions.

While Norwegian is the dominant nationality in Longyearbyen, there is remarkable diversity among the town’s population including many Thai people, Russians and native Spanish speakers.

The winter months are the ideal time to meet some of them and find out their stories for yourself.

The cultural centre is a top choice to get to know the locals. The local library is much more spacious than you would expect for a community of just a few thousand, while the cozy cafe offers filling lunchtime sandwiches at reasonable prices.

Svalbard church is open 24/7 and as such performs an important role as a community center just as much as its function as a place of worship. Aside from a Russian Orthodox church at a remote Arctic air base, it’s the world’s northernmost church. Watch this brief one-minute video for an introduction:

Continuing the northernmost theme, Svalbard Bryggeri is the world’s northernmost brewery. The brewery welcomes visitors even during the darkest time when few tourists visit. Tours and tastings are held three times a week, while the brewery’s intimate tap room welcomes all on Friday nights.

The excellent Svalbard museum chronicles the fascinating history of this against-the-odds settlement. From the early days of whaling to the peak of coal mining, the museum does an excellent job of telling the story of how Svalbard has developed.

While you may well see the unique Svalbard reindeer wandering around town, other winter wildlife are harder to spot. The museum profiles the likes of the polar bear, ringed seal, Arctic fox and Svalbard rock ptarmigan so you don’t miss out.

While Longyearbyen’s compact size encourages walking, the low temperatures and icy ground of the polar winter does not. Visit Svalbard offers several options to see the sights by methods of transport perfectly suited to the Arctic environment.

Do as the locals do and try out a snowmobile. It’s the transport of choice for many locals, while tourists can book themselves on to a variety of tours year-round. During the polar winter, a snowmobile tour in search of the northern lights is a popular choice.

Because of the 24/7 darkness, Longyearbyen is one of the few places in the world you can search for the northern lights in the middle of the day, so tours often leave in the late morning.

Husky-pulled sled rides are a perennial favourite whether you want to learn to drive the sled or just enjoy the ride as a passenger. If you don’t like the idea of speed, try out the unique snowcat experience for a guided tour of the town and its surroundings in a truly unique mode of transport.

Living through winter in Svalbard

Even though I’ve spent some time in Longyearbyen in both January and March, I can’t tell you what it’s like to live through the entire winter season. The only people who can are those who have actually done so.

In my podcast interview with Svalbard-based researcher Peter Betlem, he spoke about the very different times of year. But he surprised me by saying the long, dark winter wasn’t his least favourite time.

He explained that the relatively short transition time between the light summer and the dark winter is the most difficult time to deal with. That's because the time of sunrise and sunset is so different from day to day.

Peter also said that life in such a remote place is not always that different: “We have the luxuries of Europe including 10 flights per day going to Norway, and post arriving every day. We have a shopping mall and a dozen or so bars and restaurants.”

“On the other hand,” he added, “someone was killed by a polar bear on the camping ground in the town. So it's a very fine line between the luxuries we have here and still being in a harsh environment. That balance is the most striking thing about living here.”

There isn’t much in the way of species diversity this far north. That said, the species that do call Svalbard their home are truly remarkable ones.

The Svalbard reindeer, Svalbard rock ptarmigan and the Arctic fox have learned to cope with the challenges of finding food. They all build energy reserves during summer and autumn, using a layer of body fat to survive the harsh winters.

Most birds migrate south for the winter, leaving behind only those species adapted to the extreme winter conditions. The Svalbard rock ptarmigan is the sole land-based bird that stays. Among the seabirds, only the common eider, the long-tailed duck and the black guillemot remain.

And then of course there’s the king of the Arctic, the polar bear. Although most commonly sighted on the east coast and northern fjords of Spitsbergen, they roam, and they can roam far.

Have you visited Svalbard during the winter? How was your experience? Let us know in the comments below.