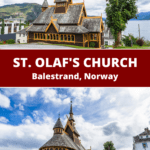 The stunning Norse-inspired St. Olaf's church in Balestrand is a charming stop on a tour of Norway's Sognefjord region. Here is its fascinating story.

At first glance, St. Olaf's Church in the idyllic Sognefjord village of Balestrand looks like one of Norway's handful of remaining wooden churches, albeit with a colourful flourish.

But while traditional Norwegian stave churches were built in the Middle Ages, this one dates back just 124 years. Not only that, it's also an Anglican church. Unsurprisingly, there's an interesting story behind it.

The eye-catching church is a landmark building not just in Balestrand but for the entire Sognefjord region. It even served as the inspiration behind the church in the hit Disney movie Frozen.

Before we did into its history, let's put this on the map. Balestrand is a small fjordside village on the northern side of Norway's Sognefjord. The setting is simply fantastic.

A ferry crossing is available from the southern side of the Sognefjord at Vangsnes, making it easy to incorporate Balestrand into a fjord Norway road trip.

The English connection with Balestrand

With its prime location on the northern edge of Norway's largest fjord, Balestrand was a popular tourist destination for adventurous Brits in the late 19th century.

One of those tourists fell head over heels in love with the place–and a person. Margaret Sophia Green was a keen mountaineer and the daughter of an English clergyman.

She quickly fell into step with the Norwegian way of life and enjoyed the easy access to the mountains from Balestrand. She even married a local, Knut Kvikne, whose family owned the impressive waterfront Kviknes Hotel, which is still in operation today.

Unfortunately, things didn't go according to plan for Margaret. She fell ill with tuberculosis and died just four years after her marriage.

Before her death, she told her husband of her desire to build an English church in Balestrand, as she had never felt comfortable in the Norwegian Lutheran churches.

To honour his late wife's memory, Knut built a church on a plot of land owned by the hotel. It was consecrated just three years after Margaret's death.

Norwegian stave churches are defined by their construction method of using corner posts and a framework of timber.

But many of them also feature fascinating wood carvings of both Christian decoration and Viking-related motifs such as animals and dragons.

In this way, the exterior of St. Olaf's church is very reminiscent of the traditional stave churches. Most notably, it features two dragon head decorations that also feature on Borgund stave church.

A portrait of Margaret still hangs in the main entrance next to a brass memorial. There is an inscription that reads: ‘the mountains shall bring peace.'

The interior of the church is full of exposed timber. Wood carvings and painted red and green details feature prominently throughout.

The painted alter and banner featuring St. Olaf are both believed to be original pieces from 1897.

The church remains in use today with English services held in the summer by visiting priests, who receive free accommodation at the Kviknes Hotel.

During services the church seats up to 90 people. The church also plays host to occasional weddings.

Tourists are free to visit the church although donations that cover the cost of maintaining the church are appreciated.