Soon you'll be able to retrace the journeys of Norwegian polar explorers in this luxury airship. The big downside? The $200,000 price tag.

With environmental concerns dominating long-term strategies in the travel industry, many people have speculated whether airships could make a comeback. This “new” approach to slow travel could be on the verge of becoming a reality.

A Swedish company has spent the last few years developing a new premium airship concept specifically designed to visit the North Pole and other remote areas.

Sweden-based OceanSky Cruises hopes to revive the age-old tradition of luxury airship travel by taking passengers from Norway to the North Pole on a 36-hour voyage.

The keyword there is luxury, as tickets for a two-bed cabin will cost around $200,000. However, the first buyers will also receive shares in the company.

Polar exploration for a new generation

Back in 1926, Norwegian polar explorer Roald Amundsen led the airship Norge to the North Pole, the first time humans had successfully reached the landmark. Almost 100 years later, keen (and wealthy) travellers will be able to retrace the journey.

While Italian-made Norge was built from strengthened aluminium covered in rubber, housing a large hydrogen balloon, the structure of the new airship will be quite different.

OceanSky Cruises says the airship is a “hybrid aircraft” that combines lift from helium with lift created by the shape of its hill. The four propellers will be able to manoeuvre the 100-metre-long airship through the skies for “days” at a time.

The company says the strong polar winds will increase its efficiency and speed, giving the airship a much lower fuel consumption than other aircraft.

So, what does $200,000 get you? A 36-hour return trip in the airship from Svalbard to the North Pole, including activities on the ground and return flights to/from Svalbard.

While on the airship you'll essentially be staying in a luxury hotel. Up to 16 passengers will spend two nights onboard and enjoy fine dining accompanied by eight crew. This includes pilots, flight attendants, a chef, and an experienced expedition leader.

The eight en-suite double cabins will feature panoramic windows. Planned public areas include a restaurant, lounge and bar, and a glass-bottomed sightseeing lounge.

The expected itinerary would see a 6pm departure from Longyearbyen in Svalbard, before passengers enjoy dinner and cocktails. Following breakfast and a full briefing the next morning, the airship would land at the North Pole at approximately 9am.

Approximately six hours would be spent at the North Pole including various activities at lunch, before an afternoon departure and an onboard dinner. The airship would land back in Longyearbyen early the following morning.

The first trip to the North Pole is planned for 2024 or 2025. OceanSky said it was in talks with a number of airship builders, including British company Hybrid Air Vehicles, maker of the Airlander 10, the world’s biggest aircraft.

“The expedition to the North Pole is for the traveller who wants to experience the Arctic in a unique way, and at the same time contribute to the development of sustainable travel,” said OceanSky's founder and CEO, Carl-Oscar Lawaczeck.

“Roald Amundsen flew from Svalbard and over the North Pole in 1926 with the airship Norge. Now we are doing the same expedition, but we will also land on the North Pole,” he said, adding that passengers “will enjoy the arctic nature in serenity and comfort in a hyper-efficient modern flying vehicle. They will be pioneering a new way to travel, flying for sustainable skies.”

What do you think about the plans for luxury airship travel? 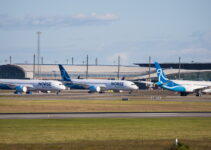